On this day, we saw Joe Calzaghe take to the ring for the last time. Boxing is a cruel, unforgiving sport. Even the greatest champions often get ill-fitting, painful farewells. Muhammad Ali suffered the indignity of his hollow shell being knocked around by Larry Holmes and Trevor Berbick. Ricky Hatton heartbreakingly found Vyacheslav Senchenko a bridge too far. Even just this year, we saw the ghost of Evander Holyfield exorcised by Vitor Belfort in a shameful demonstration of how this sport treats its legends. But Calzaghe not only escaped such humiliation, he left bathed in glory. On 8th November 2008, he claimed the 46th victim of a perfect professional career. The two-weight world champion was unbeaten and unbowed, as he took apart Roy Jones Jr.

Detractors will say Jones himself was suffering through his own prolonged and unedifying conclusion at the time. The former pound-for-pound king had seen his aura of invincibility shattered by Antonio Tarver and Glen Johnson earlier in the decade. This was not the peak Roy that had been linked with the Calzaghe fight on-and-off for the last decade, during the Welshman’s ten-year reign as WBO super middleweight champion. However, having gone 3-0 in good company since his last loss, this was also not the shell of a man who would later be humbled by Danny Green and Enzo Maccarinelli. Remaining world-ranked, Jones was a faded opponent, but a live one.

If Jones can be dismissed as something of a soft touch, employed more for his box office appeal than his athletic merits, it can be argued Calzaghe deserved a relatively easy night. ‘The Italian Dragon’ was coming off a remarkable few years. The Welsh slickster had cleaned up the super middleweight division, dismantling IBF champion Jeff Lacy in the most dominant twelve-round display ever in a British ring. After beating awkward future champion Sakio Bika, and demolishing former The Contender cast member Peter Manfredo Jr, Calzaghe embarked on a pair of super-fights.

First, a dream showdown with WBC and WBA super middleweight king Mikkel Kessler at the Millennium Stadium. The home fighter won a decision after twelve blistering rounds of high-level boxing. The fight was considered a true “pick ‘em” going in, with experts making a compelling case for either fighter to triumph beforehand. But Calzaghe won the game of fine margins, with his supreme hand-speed and relentless activity earning him the decision. After holding all four belts in the super middleweight division (the IBF title was stripped pre-Kessler), and defending his WBO strap on an incredible 21 occasions, Calzaghe set his sights on the light heavyweight division.

When he arrived at 175, the ageless ‘Executioner’ was waiting for him. 43-year-old Ring magazine light heavyweight champion Bernard Hopkins was without doubt the most daunting fight you could have chosen at the time, particularly having just come off a war with Kessler. Hopkins’ pre-fight comments about not being able to “let a white boy beat me” only added needle to an already ill-tempered build-up. The champion was a master of psychological tricks, and was probably the most adept ‘mind games’ fighter Calzaghe had faced since Chris Eubank in 1997. 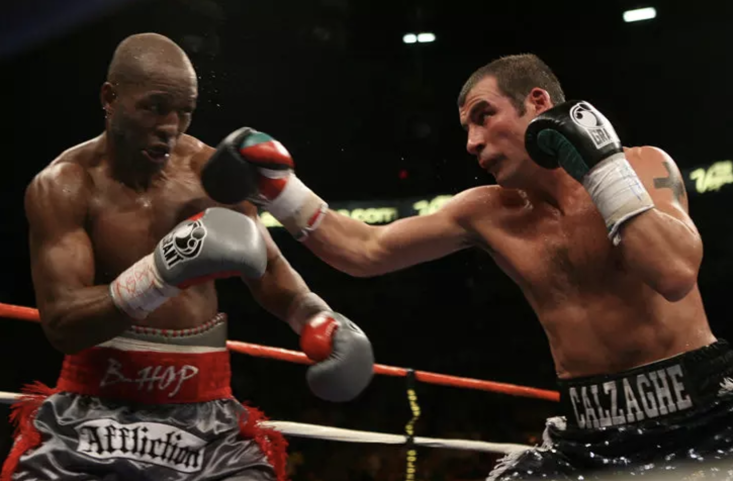 On the night, Joe’s mentality proved vital. He was dropped in the first round by a Hopkins right. The punch left him with a cut on the bridge of his nose, and a bruise to his pride. But Calzaghe rose, and went to work out-hustling the best defensive fighter of the era. Beating Hopkins at his own game, the challenger went about the task of winning ugly, relishing the sort of cagey, tactical fight that the champion usually won. Referee Joe Cortez had to speak to both men at various points, and the infractions were not limited to holding and hitting, low blows and hitting on the break. It was a rough fight, the sort it is tough to win and even harder to look good in. But at the close of play, Calzaghe was awarded the split decision and the Ring championship.

So after a bruising few years, Jones did perhaps represent some respite for the decorated two-weight king. But the old instincts were still there, as Calzaghe was knocked down in the first round for the second time in consecutive fights. The fact these were his only two fights in America, and both saw him rise from the canvas in the opening stanza, is an interesting piece of trivia for this concluding part of Joe’s journey.

Unlike Hopkins, who tested Calzaghe’s resistance all the way to the final bell, Jones could not sustain his promising start. By the third round, this was a vintage display from ‘The Pride Of Wales’. Jones would have occasional success with single punches, before his opponent would invariably roar back with combinations. Clearly enjoying himself, and perhaps acutely aware this would be his final bow, the Welshman began to showboat. Jones had built his own stellar reputation on a series of peacocking performances throughout the 1990s, and now the tables had turned. Calzaghe danced around the ring, shimmying for the crowd before laying in more leather. This light heavyweight championship contest had become a victory lap.

The scorecards were read out amongst a maelstrom of nervous tension against Hopkins, against Jones they were a foregone conclusion. Joe Calzaghe, the undefeated. ring great who had dominated his sport for two decades, was the winner. And then he was gone.

As referenced in the opening, boxing does not treat its legends well. Invariably there is a wheelbarrow of cash on offer for any retired glovesman willing to compromise his health and dignity for one last brush with fame. But Calzaghe has remained resistant. Challenges from the likes of Kelly Pavlik and Carl Froch were always waved away with amusement by Calzaghe. Which is why his illustrious prime remains frozen in time, unsullied by the passing years. We can look back and enjoy Joe Calzaghe, perhaps Britain’s greatest ever fighter, at his very best. And that is because he never stopped being at his very best. To watch an old Joe Calzaghe fight is to see a brilliant fighter at the peak of his powers. On this day in 2008, we saw exactly that for the very last time.