What do Muhammad Ali, Mike Tyson, Saul ‘Canelo’ Alvarez, Tyson Fury and Floyd Mayweather      have in common? Beyond all being decorated boxing greats, there is another commonality they all share. They never put as many people in a stadium as Julio Cesar Chavez. ‘The Caesar Of Boxing’ did it all in a career that spanned over 25 years. Chavez captured multiple world titles across three-weight divisions, and fought an eye-watering 115 times, losing just six of these bouts. But most pertinently, on this day in 1993, he fought in front of the largest paid boxing crowd ever assembled.

Chavez’s road to this impressive feat had been a spectacular one. ‘JC Superstar’ was 84-0, a three-weight world champion and the reigning and defending WBC light welterweight champion. At just 31 years of age, Chavez had compiled a Hall of Fame worthy ledger. He was also wildly popular in his home country of Mexico. The definition of a national hero, his supporters would flock to fights sporting his signature red headband, to roar their idol on to victory. It made sense t put as many of these adoring fans in one place as possible, and that’s exactly what happened in 1993.

Chavez would meet former two-weight world champion Greg Haugen at the vast Estadio Azteca in Mexico City. The seeds were planted for the bout when Haugen challenged Chavez in the aftermath of the latter’s win over Marty Jakubowski. The Mexican’s reply to his brash challenger was cold and uncompromising. “I will not have mercy with you. I will rip your head off.”

The personal grudge between the fighters was a feature of the build-up. Haugen successfully got under the skin of the proud Mexican by deriding his beloved home. Making comments that are disgusting by modern standards, Haugen suggested there weren't 130,000 Mexicans who could afford to attend the fight, and called Chavez’s previous opponents “Tijuana taxi drivers”. Nowadays such words would lead to a social media storm followed by Haugen being cancelled. Chavez had something far more brutal and effective in mind for his opponent. 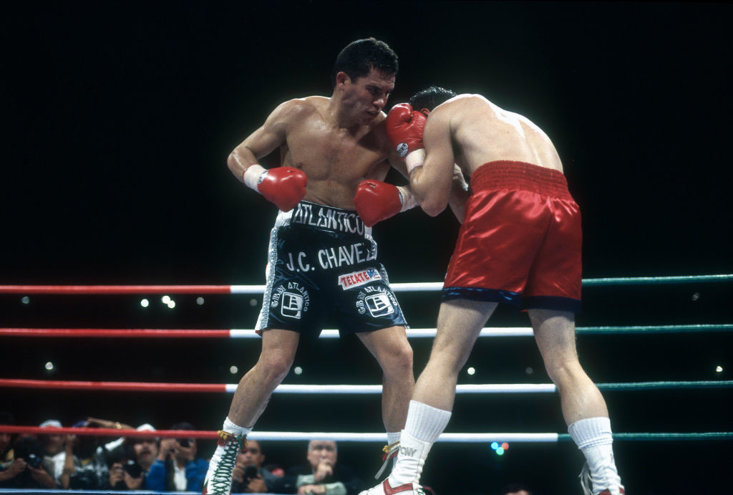 132,147 fans were in attendance on 20th February 1993, and contrary to Haugen’s jingoism this remains the largest paid crowd ever to attend a boxing event. Tony Zale’s 1941 victory over Billy Pryor is the only fight to have been staged in front of more people, and that contest was free to attend. Chavez and his countryman set a record for a paid crowd that is likely to never be broken.

While the setting was immediately historic, Haugen was not able to engineer an upset for the ages. Instead his pre-fight hubris was swiftly and brutally punished. Usually the sort to take a look at a foe in the early going, this time Chavez came out like a man possessed. The champion felled Haugen in the opening round, before rocking him again late in the stanza. The mauling continued from there, Chavez went to work carving the challenger up with left hooks and devastating combinations.

Haugen was tough, firing back with the odd warning shot and trash-talking with Chavez. His words had about as much effect as his punches though, as Chavez rained blows down upon him. A harsh body shot dropped Haugen again in the fifth, and when he rose he found himself trapped in a hailstorm of Chavez artillery. The fight was waved off, and the biggest paid crowd in boxing history had seen their man win for the 85th time.

Haugen saw the funny side of his shellacking, partially retracting his post-fight bluster and admitting “They must have been tough taxi drivers!”. A humbling defeat can have that effect on a man. In front of over 130,000 of his best friends, Chavez had made Haugen eat every one of his offensive words. To that bumper crowd, and the millions who watched him throughout a glittering career, Julio Cesar Chavez will always be ‘JC Superstar’.