‘El Cholo’ was the picture of a boxing hard man. If you were making a cartoon depicting the sort of vicious, unrelenting badass boxing alone can produce, you might avoid drawing Duran for fear it would be too on the nose. The Panamanian had ripped through the lightweight division like a scythe through corn, never looking back after capturing the title from Scotsman Ken Buchanan in 1972. Duran would defend his title eleven times, in addition to taking on multiple non-title fights in between, during the most imperious phase of his glorious career.

Having scorched the earth of the 135-pound class, Duran’s next stop was welterweight. This would lead to the Brawl In Montreal, against 27-0 welterweight king ‘Sugar’ Ray Leonard. The Olympic gold medalist had a flawless record as a pro, and had beat Wilfred Benitez and Dave ‘Boy’ Green. The jump in weight, and the world class nature of his opponent, meant few gave the fearsome Duran a chance against Leonard.

Not for the last time, ‘Hands of Stone’ would upset the odds in spectacular fashion. In one of the great welterweight wars, Duran drew the ‘Sugar’ man into Panama City street fight. Leonard’s slick boxing was negated by the rough-and-ready battle that broke out. A brawl was exactly what Montreal got that night, and by the end, they had a new welterweight champion.

The victory made Duran a king in Panama. Unfortunately, he partied and ate like one. Reports suggest the new champion gained as much as 50 pounds while celebrating his triumph over ‘Sugar’ Ray, a fact the now-former champion was all too aware of. Leonard petitioned to get Duran back in the ring as soon as possible, at a cost. Dave Jacobs, one of Leonard’s trainers, resigned because he believed his man should fight a tune-up before getting back into the ring with the only man to defeat him. ‘Sugar’ Ray trusted his own instincts, and would be glad he had when all was said and done. 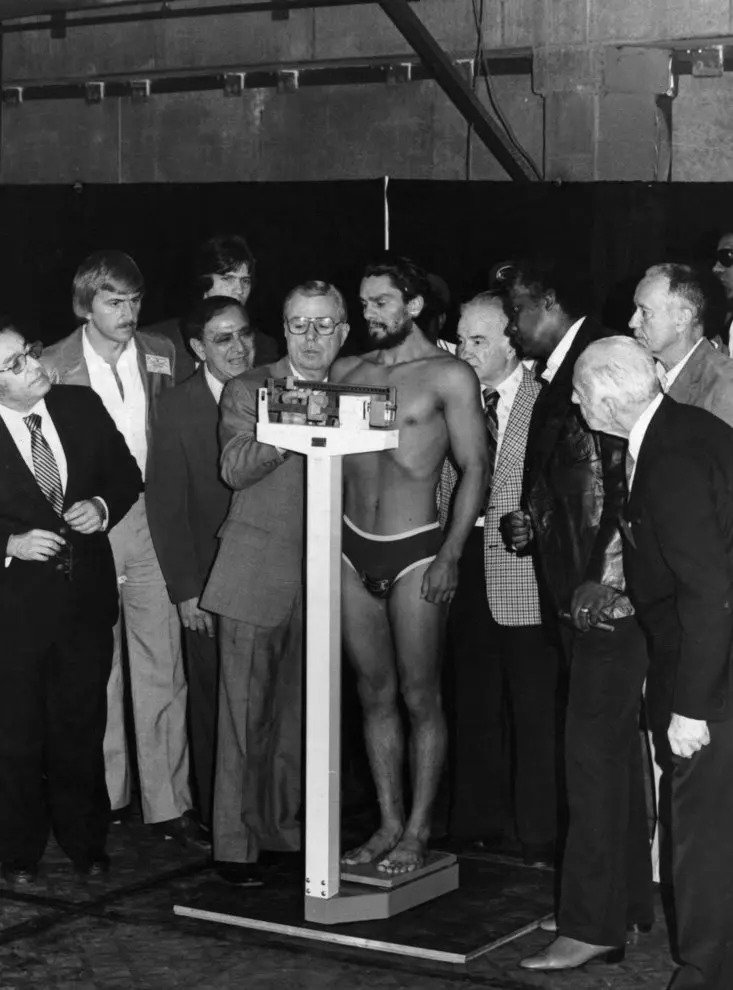 The pair met five months after their furious first bout, this time in the vast expanse of the Superdome in New Orleans, Louisiana. The venue was not the only thing different about this rematch. Leonard would not be drawn into a wild throwdown this time. Instead, he timed Duran’s brutal rushes, catching El Cholo coming in with sharp jabs and uppercuts. The exchanges now happened on Leonard’s terms, and whether he started them or not, he was always the one to end them with a swift flurry before moving away. One of boxing’s great masters of physical chess, ‘Sugar’ Ray was a picture of measured calm as Duran’s swings got wilder and more desperate.

Approaching the halfway stage, the champion was still in the fight. His evening had not featured a savage beating, rather it was a frustrating out-foxing for the proud Panamanian. But the effect on his psyche was more severe than the effect of Leonard’s punches. The North Carolina slickster spun his right arm to throw his famed ‘bolo punch’, before turning it into a series of jabs that rocked Duran’s head on its axis. Leonard was barely blocking by now, instead offering his face to Duran before jerking it just out of range and firing back with his own shots.

In the eighth, Duran gave desperate chase. He seemed to be willing his arms to do what they had in the first fight, but was met with the constant rat-a-tat-tat of Leonard’s speedy combinations in return. Eventually, he has enough. After attempting a final telegraphed flurry, he holds a hand up and walks away from Leonard casually. The challenger gives chase, aiming a punch at Duran but being restrained by the referee. The official tries to restart the contest. Again, Roberto raises a conciliatory hand and speaks in the referees ear. It has been widely reported and accepted that he said “no mas”, Spanish for “no more”. Duran has always vehemently denied this, while other witnesses swear blind that it did occur. Crucially, the beaten man has never denied he did quit at the moment, irrespective of his chosen wording.

There was no shame in losing to ‘Sugar’ Ray Leonard, someone who would go down as one of the very best boxers of all time. In 1980, though, there was unfortunately great shame in quitting. A rugged masculine figure like Duran downing tools in such a fashion was an international scandal in a way it would never be today. The fact that Duran not only quit, but did so while only slightly behind on the cards and not particularly hurt fuelled the fire tenfold. Duran was immediately removed from advertisements he had had airing in Panama and the United States.

In his home country in particular, he was a pariah. There are tales of Duran having to go into hiding, trapped behind the locked doors of his home for fear of the baying mobs that awaited him outside. The beaten fighter tried to rationalise what had taken place. He claimed he had suffered stomach cramps during the fight, a result of making the welterweight limit. While few believed him, it is only fair to point out he never weighed in on the welterweight limit of 147 pounds again.

Leonard would not lose another fight for eleven years, when an ill-advised title challenge against WBC light middleweight champion Terry Norris would find ‘Sugar’ past his sell-by date. Duran would redeem himself in the eyes of the boxing world, and perhaps more importantly his nation. There were parties in the streets when he beat Davey Moore in 1983 to win the WBA light middleweight belt, and he would also upset Iran Barkley for the middleweight strap in 1989 at the age of 37. In his next fight, he would meet Leonard again.

The fight was a pale imitation of their ferocious first and controversial second, but it was an enjoyable opportunity to see two legends of the ring meet again. Their showdown was wryly dubbed “Uno Mas”, signifying one more go-round for the pair. There would be no quit in Duran this time. He might have lost the fight on points, but he regained his pride by taking ‘Sugar’ Ray Leonard the distance.

x
Suggested Searches:
Manchester United
Liverpool
Manchester City
Marcus Rashford
Premier League
More
boxing
Teofimo Lopez vs George Kambosos Jr Could Join The Great Lightweight...
Teofimo Lopez and George Kambosos Jr finally step into the ring on Saturday in a blockbuster lightweight [ ... ]
boxing
Joe Joyce In Talks To Face Pulev: Five Boxing Stories You Might...
Joe Joyce is set for a heavyweight showdown with a division veteran, Amir Khan versus Kell Brook is, [ ... ]
boxing
Rocky Fielding, Ohara Davies And Badou Jack Take To The Ring...
Super lightweight standout Ohara Davies returns to the ring on Friday in Dubai. He was originally scheduled [ ... ]
boxing
Joe Joyce Wants To Face Tyson Fury, But Dillian Whyte Won’t...
Joe Joyce has thrown his hat into the ring for a possible world heavyweight title clash with Tyson Fury. [ ... ]
boxing
The Top 10 British Heavyweights Of The Modern Era
British boxers have taken over the heavyweight division in recent years. WBC and lineal champion Tyson [ ... ]
boxing
After The Porter Slaughter, Terence Crawford MUST Fight Errol...
People told Terence Crawford that his record needed a world class welterweight in their prime, so he [ ... ]
boxing
Everything You Need To Know About Teofimo Lopez vs George Kambosos...
It has been a long, bizarre road but Teofimo Lopez will finally step in the ring with George Kambosos [ ... ]
boxing
Mike Tyson’s Destruction Of Trevor Berbick Is Still Stunning...
On this day 35 years ago, Mike Tyson became the youngest world heavyweight champion in history. He was [ ... ]
boxing
Everything You Need To Know About Demetrius Andrade Vs Jason...
Demetrius Andrade, perhaps the most avoided man in boxing, returns to the ring tonight. ‘Boo Boo’ [ ... ]
boxing
Terence Crawford vs Shawn Porter Is A Match Made In Heaven
Modern boxing is often criticised for providing fights that aren’t competitive on paper, mismatching [ ... ]
boxing
Is Canelo Cruising For A Bruising? Saul Alvarez Targets WBC...
In the wake of Saul ‘Canelo’ Alvarez beating Caleb Plant to become undisputed super middleweight [ ... ]
boxing
‘If You Can’t Kill Me, Then Forget It’: Richard Commey Is Ready...
Former IBF lightweight champion Richard Commey is in a confident mood as he prepares to face pound-for-pound [ ... ]
boxing
Everything You Need To Know As Riakporhe Headlines Weekend’s...
This weekend sees Richard Riakporhe headline a fascinating night of action on BOXXER’s Sky [ ... ]
boxing
Triller Announces Triad Combat: Triangular Rings, Hybrid Rules...
Triller have announced Triad Combat, a “revolutionary, combat team sport” that incorporates [ ... ]
boxing
Everything You Need To Know Ahead Of Terence Crawford Vs Shawn...
This weekend sees one of boxing’s pound-for-pound best fighters make his long-awaited return to [ ... ]
boxing
Remembering The Fight When Muhammad Ali Proved He Was Undeniably...
“The greatest Ali ever was as a fighter, was against Williams - that night, he was the most devastating [ ... ]
boxing
Ki-KO: Kid Galahad Stunned By Super Spaniard Martinez In IBF...
The dream has come true for Kiko Martinez. The Spanish veteran had been written off by critics, and [ ... ]
boxing
Heartbreak For Terri Harper As Alycia Baumgardner Dethrones...
Terri Harper was sensationally stopped in the fourth round by Alycia Baumgardner, losing the WBC super [ ... ]
boxing
On This Day: Holyfield And Bowe Kick Off The Greatest Heavyweight...
On this day in 1992, the greatest heavyweight trilogy of all-time kicked off. With all due respect to [ ... ]
boxing
''We'll See After This Fight'': Terence Crawford On Becoming...
WBO welterweight champion Terence Crawford returns to the ring next weekend, in a top-drawer match-up [ ... ]
boxing
Eubank Jr vs Williams Set For December: Five Boxing Stories...
There’s been some rumblings of a brand new Fight Night game heading our way, we've got an [ ... ]
boxing
Liam Williams Says He Would Maul Chris Eubank Jr If They Met...
An all-British middleweight showdown between Chris Eubank Jr and Liam Williams looks imminent, with [ ... ]
boxing
On This Day: Usyk Knocks Out Bellew In Britain’s First Glimpse...
Oleksandr Usyk’s dominant September WBA, IBF and WBO heavyweight title win over Anthony Joshua [ ... ]
boxing
Angry Anthony Joshua Wants To “Bash Usyk Up” In Rematch Says...
Eddie Hearn has given an update on Anthony Joshua’s hunt for a new trainer ahead of the Brit’s [ ... ]
boxing
Everything You Need To Know Ahead Of Kid Galahad Vs Kiko Martinez
Kid Galahad makes the first defence of his IBF featherweight strap this weekend when he takes on veteran [ ... ]
boxing
On This Day: 25-1 Underdog Evander Holyfield Shatters The Mike...
On this day in 1996, Mike Tyson did what he always did. The commentators read off a list of his quickest [ ... ]
boxing
What Will Canelo Do Next? Saul Alvarez Has A Wealth Of Options
“And when Alexander saw the breadth of his domain, he wept, for there were no more worlds to conquer” [ ... ]
boxing
On This Day: Joe Calzaghe Takes Well-Deserved Victory Lap Against...
On this day, we saw Joe Calzaghe take to the ring for the last time. Boxing is a cruel, unforgiving [ ... ]
boxing
So You Think You Know Canelo? Take Our Undisputed Saul Alvarez...
Saul 'Canelo' Alvarez takes on Caleb 'Sweethands' Plant on Saturday night, in a fight [ ... ]
boxing
Prelude To History: The Canelo-Plant Undercard Carries Intrigue
The undisputed super middleweight title battle between Saul ‘Canelo’ Alvarez and Caleb ‘Sweethands’ [ ... ]