Boxers don’t always face off when we want them to. Unlike other sports, where league systems or seeded tournaments produce instances of the best facing the best, no such mechanism has found long-term success in the sweet science. One need only look at the upcoming Amir Khan vs Kell Brook affair for an example of an attractive match arriving years too late. The same could be said of Roy Jones Jr’s clash with Felix ‘Tito’ Trinidad, which took place on this day in 2008.

Trinidad and Jones were arguably the defining fighters of the 90s, but it was not the 90s any more. In 2008, both men were shopworn, both had been bloodied in battle and had their cloaks of invincibility tattered. When this fight, dubbed ‘Bring on the Titans’, was announced, Jones had not held a world title for four years. Trinidad had not even fought for the last three. This was a sporting event, sure, but the word ‘event’ was doing most of the heavy lifting. This was less a clash of two of the world’s top contenders, and more a real-life version of the “What if Superman fought the Hulk?” playground debates you had as a child.

Roy Jones Jr. was entering the fight in-form. That form was more acceptable than electric, but he was coming off wins over fringe contenders Prince Badi Ajamu and Anthony Hanshaw. The two bouts saw the former four-weight world champion looking more like his old self than he had in three consecutive defeats through 2004 and 2005. Jones had captured the WBA heavyweight championship in 2003, a historic achievement that made him the first former middleweight champion to do so since Bob Fitzsimmons over a century ago. But like Icarus flying too close to the sun, Jones’ skills eroded like paper wings when he came back to the light heavyweight division. Antonio Tarver and Glen Johnson relieved him of his titles and his dignity, leaving the Trinidad superfight as his last shot at relevancy.

Trinidad’s slide had been quieter and less pronounced. He rebounded from losing a 2001 middleweight title showdown against Bernard Hopkins with impressive wins over Hacine Cherifi and Ricardo Mayorga. But a comprehensive and one-sided points defeat to the magnificent Ronald ‘Winky’ Wright in 2005 had caused him to retire. Trinidad was still only 35 when he came out of self-imposed exile to fight Jones, four years younger than his opponent. Always a huge ticket seller, a win over even a depleted Jones could have been a springboard to some major bouts down the road. 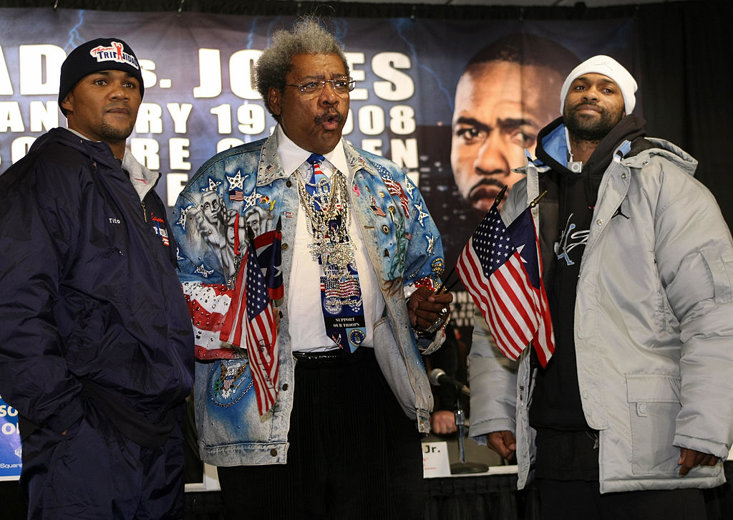 The fighters were not the only part of the promotion to have seen better days. This unusual bout was staged by Don King, the infamous fight promoter who had served as boxing’s red right hand for decades. His influence, like the reflexes of the headliners, was fading. King had boxing, and particularly the heavyweight division, in a stranglehold during the 80s and 90s. But by 2008 he was a peripheral figure, as an era of European heavyweight dominance eroded his empire. For one night though, this fight would put all three men back on top of the boxing world.

The bout played out at Madison Square Garden in New York, a prestigious venue befitting the big names involved. A watching audience of half a million people on pay-per-view made for a further $25 million dollars in revenue. The pull of two all-time greats meeting was strong, regardless of whether they remained in their prime.

The bout delivered on the promise of what Don King had dubbed “a dream fight”. In 2022, we have grown accustomed to aging fighters putting on unedifying spectacles, but both Trinidad and Jones were sharp enough to keep their 170-pound catchweight fight engaging. That size suited Jones more than his Puerto Rican foe, who had never fought higher than the 160-pound middleweight limit. Trinidad was left swiping at thin air as the Pensacola legend turned on the old defensive charm to evade his blows.

Jones landed significant leather of his own, and sent Trinidad to the canvas twice over the course of that winter evening. A well-schooled short right hook toppled Trinidad in the seventh, and ‘Tito’ was done again in the tenth from a quick combination. Jones was impressive, even accounting for his opponent’s inactivity and the weight difference. His reflexes looked sharper than they had in years, and some of the confident swagger Tarver and Johnson had brutally sapped started to ebb through him again. In front of the eyes of the world one more time, Roy Jones Jr. was the precocious, peacocking champion of yore. 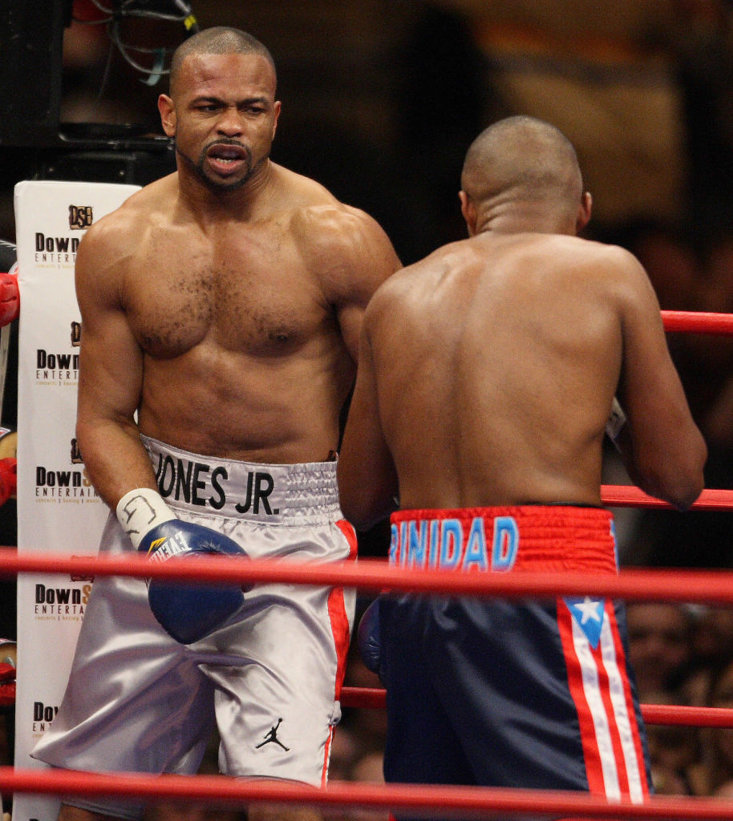 This stunning return to his best form earned Roy a unanimous decision win, as well as netting Trinidad, King and himself a monster payday. Three of the defining names of boxing’s previous era shared one last moment in the sun together. It would never be this good again for any of them.

Felix Trinidad returned to retirement a richer man. Comebacks were rumoured and rebuffed, as he mulled over his options. The former welterweight, super welterweight and middleweight boss retired with a 42-3 record and a place in the Hall of Fame assured.

Roy Jones Jr parlayed his victory into a shot at The Ring light heavyweight champion Joe Calzaghe. ‘Captain Hook’ had the Welshman on the deck in the opening round, but was comprehensively beaten and lost a unanimous decision. But after his three consecutive losses a few years before, the very fact he was fighting for a world title again was an achievement in itself. Jones fought on for a further decade, winning more than he lost but never coming close to recapturing the spark that burned brightly for one final time against Trinidad.

Of the three, Don King is the one closest to performing like he did in his prime. While he has long been left behind by a new generation of promoters, the wily and wild-haired huckster is still up to his old tricks. At the end of this month, King’s WBA ‘regular’ heavyweight champion Trevor Bryan will defend his questionable title against Jonathan Guidry. Despite being ranked 256th in the world by independent body BoxRec, Guidry found himself inexplicably ranked 13th by the WBA this month. Never change, Don. Actually do change. It’s embarrassing at this point.