Before the A-list Hollywood megastar Dwayne Johnson, there was pro wrestling superstar The Rock. The ubiquitous star of the Jumanji and Fast & Furious franchises took an unusual road to silver screen superstardom. A road paved with bumps, bruises and blood. 25 years ago today, he debuted for the WWE at Survivor Series 1996.

Dwayne Johnson was born on 2nd May 1972, the son of former WWE tag team champion Rocky Johnson, and grandson of wrestler ‘High Chief’ Peter Maivia. Despite growing up around the business, with Johnson recalling visits from Andre The Giant to his childhood home, the future Rock chose to pursue American football. After a championship-winning college career with the Miami Hurricanes, Johnson turned professional in the Canadian Football League. The Moana star was cut after two months in the practice squad, and decided to turn his attention to the business that ran in his blood.

Industry connections go a long way in any business, and Johnson was able to secure early tryout matches with the WWE. Wrestling under the incredible moniker Flex Kavana, the young prospect wrestled in untelevised matches and for the USWA, owned by WWE commentator Jerry ‘The King’ Lawler, to gain experience. It was not long until the 6’5 kid from Miami was offered a WWE contract, following in the footsteps of his father and grandfather in working for the company.

The creative minds of the world’s biggest wrestling organisation quickly decided that Flex Kavana wasn’t going to cut it as a name, and instead reached into Johnson’s heritage to find a more appropriate character. Taking his Dad’s forename and his grandad’s surname, Rocky Maivia was born. The newcomer no longer sounded like a character from the Beano, but a fully-realised human being.

His first match arrived on this day a quarter of a century ago. Maivia would debut in a traditional Survivor Series match, where two multi-person teams are pitted against each other under elimination rules. The debutant teamed with Jake ‘The Snake’ Roberts, Marc Mero and Barry Windham in his short-lived Stalker gimmick, to face Lawler, Goldust, Crush and future-rival Hunter Hearst Helmsley, who would go on to become Triple H. Maivia was given a strong chance to make a first impression, eliminating Crush and Goldust on the way to being sole survivor. 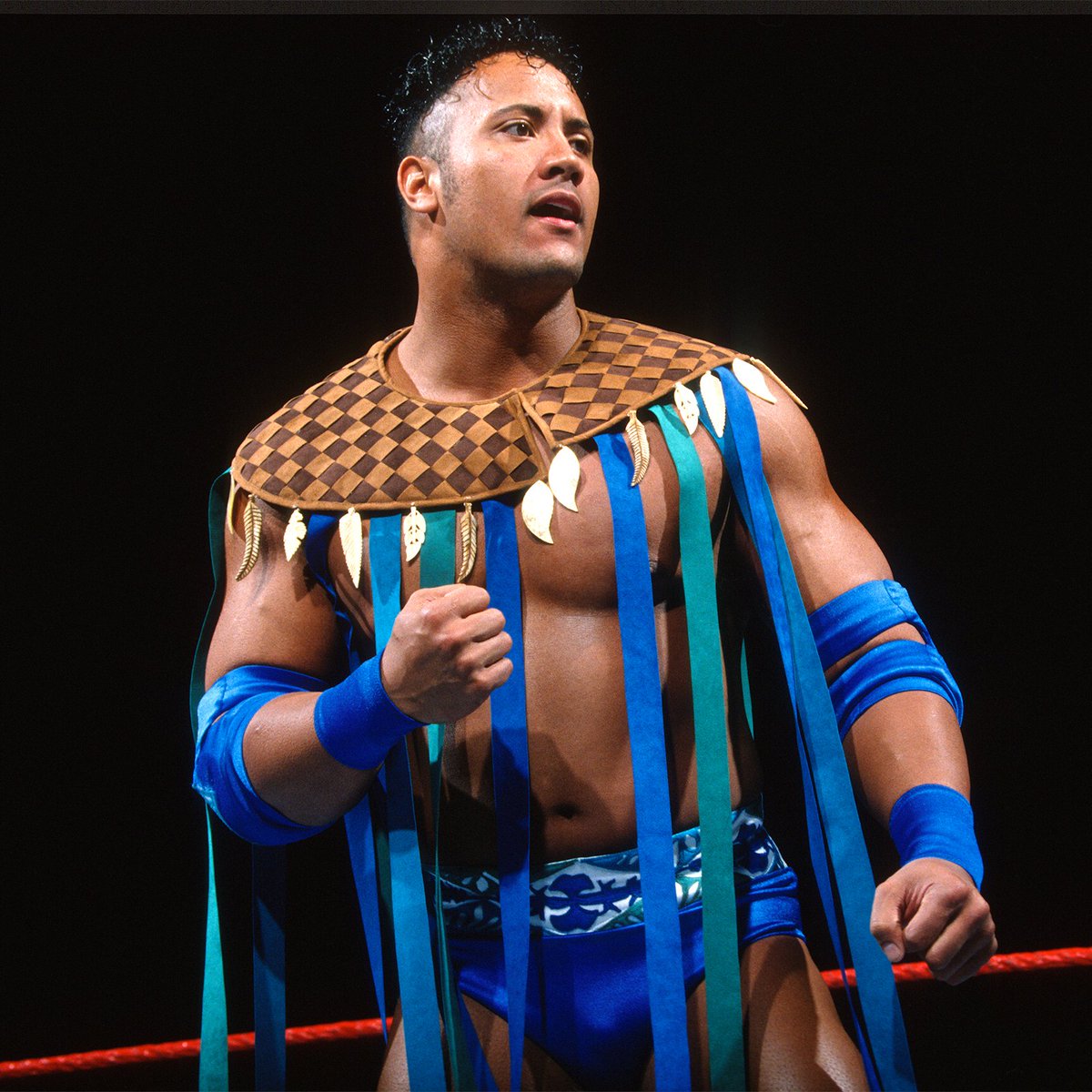 Despite this star treatment, fans were slow to warm up to ‘The Blue Chipper’. Portrayed as a smiling, polite babyface, Maivia felt like a man out of time. Over on the other channel, WCW was presenting perennial hero Hulk Hogan as a sunglasses-wearing heel character dubbed Hollywood Hogan. Outlaw promotion ECW was putting on matches with barbed wire ropes and broken tables. Wrestling was skewing darker and more gritty in its presentation, something which was not reflected in the bright blue tassels of Rocky Maivia. The youngster routinely had chants of “Rocky Sucks” and “Die Rocky Die” ring out during his matches, the audience seeing through the facade.

WWE held firm with their promotion of Rocky, giving him an Intercontinental title win in February 1997, and a disqualification win over made man Bret ‘The Hitman’ Hart the following month. The crowd would not be sated, however. Little did they know, their jeers would be the embers that lit the fire of one of the biggest names in entertainment.

After spending time on the sidelines with an injury, the spurned star returned in the summer of 1997. The tassels were swapped for fashionable grays and blacks, sunglasses hanging menacingly on the returnee’s nose. This was not Rocky Maivia, the smiling babyface. This was The Rock, the sneering heel who berated the very fans who had rejected him. Joining up with The Nation Of Domination, a militant stable based on the Black Panthers and The Nation of Islam, The Rock immediately caught on with audiences. The storyline worked because it turned the fans’ own aggression against them. The Rock railed against the ‘Die Rocky Die’ chants, and now when the audience chanted those words at him it was an endorsement of the character. They were buying into this brash new heel, and from that point on they always would.

The rest of the story is well-documented. Just 14 months after debuting his new character, The Rock would lift the WWE Championship for the first time. From there, there was no stopping the industry’s new sensation. Iconic feuds with Mankind, Stone Cold Steve Austin and Triple H would follow. In 2001, the star would make his initial transition into movies, with a role in The Mummy Returns. After impressing in his silver screen debut, a spin-off titled The Scorpion King was released with Johnson as the lead.

The rest is history, with Dwayne Johnson becoming the highest-grossing box office star of 2019 and an ever-present lead actor in huge franchise movies. But Hollywood may not have found one of its most bankable leading men, if it was not for the debut of a rookie professional wrestler 25 years ago today.

x
Suggested Searches:
The Sportsman
Manchester United
Liverpool
Manchester City
Premier League
More
us-sports
NBA Draft 2022: The Orlando Magic Select Paolo Banchero As First...
The Orlando Magic selected Paolo Banchero as the first pick in the 2022 NBA Draft on Thursday at the [ ... ]
us-sports
The Grap Wrap: Vince McMahon Embroiled In 'Hush Money' Scandal
It’s been a bumper week of wrestling news, with the more controversial side of the squared circle [ ... ]
us-sports
Phil Jackson: The Man Who Elevated Jordan And Bryant To The...
You hear Chicago Bulls, you think Michael Jordan. You hear Los Angeles Lakers, you think Kobe Bryant. [ ... ]
us-sports
The Grap Wrap: Bray Wyatt To Return? MJF's Flight Drama And...
Good morning grapple fans, and welcome to a new semi-regular professional wrestling column from The [ ... ]
us-sports
Colin Kaepernick, The NFL Star Rather Than Activist, Might Be...
Google Colin Kaepernick. There he is, the ‘American activist’. Check out Wikipedia. Oh yes, [ ... ]
us-sports
On This Day 20 Years Ago, The British Bulldog Davey Boy Smith...
On 18th May 2002, ‘British Bulldog’ Davey Boy Smith passed away from a heart attack at the [ ... ]
us-sports
NBA Playoffs Resume After Chaotic Exits For Champion Bucks And...
It’s been a tremendous few days in the NBA and this week’s conference finals, which start [ ... ]
us-sports
Ric Flair Returns At 73: The Nature Boy Will Walk That Aisle...
“To be the man, you gotta beat the man!” ‘Nature Boy’ Ric Flair has uttered [ ... ]
us-sports
There Are Storylines Everywhere You Look In The NFL's Week 1...
Something the NFL seem to be willing to do is make their sport a spectacle through their own power. [ ... ]
us-sports
Chuck Daly: 'Daddy Rich' Tamed Rodman, Bagged Isiah His Rings...
Entering a debate on the greatest sports sides in history should inevitably reach a particular conclusion. Avoiding [ ... ]
us-sports
'We Want RK-Bro! We Want The Usos!': No One Is Safe From Sasha...
When WWE Women’s Tag Team champions Sasha Banks and Naomi first joined WWE, the landscape was [ ... ]
us-sports
Everything You Need To Know About WWE WrestleMania Backlash
The wait ends this weekend, as WWE returns with their first Premium Live Event since WrestleMania. This [ ... ]
us-sports
The Crazy Times Of Kareem Abdul-Jabbar, The NBA All-Star Who...
This article first appeared in The Sportsman on 05/05/20 Being the number one draft pick in the NBA [ ... ]
us-sports
Blood Brothers: Randy Orton And Riddle Talk Chemistry, Growing...
The old adage dictates that opposites attract, and on the face of it that certainly seems true of RK-Bro. [ ... ]
us-sports
The NFL’s Best Trades and Free Agency Signings So Far
It’s the same every year. Almost as soon as the Vince Lombardi Trophy is awarded, attention turns [ ... ]
us-sports
Impact Wrestling's D'Lo Brown: We Didn't Open The Forbidden...
It is such an overused phrase that it has become cliched, but Impact Wrestling’s D’Lo Brown [ ... ]
us-sports
How ‘The Last Dance’ Brought Michael Jordan's Chicago Bulls...
It's now been 26 years since the Chicago Bulls ended the NBA season with a record of 72 wins and [ ... ]
us-sports
On This Day In 2018: WWE Icon Bruno Sammartino Passes Away
There have been 30 WWE Championship reigns in the last 2,803 days. In the 2,803 days between 17th May [ ... ]
us-sports
Why Jackie Robinson Day Means As Much Today As It Ever Has
Across Major League Baseball on Friday, number 42 will pitch to number 42. Number 42 will field the [ ... ]
us-sports
Frank Vogel Out: Who’s Next In The Hot Seat For The LA Lakers?
Head Coach Frank Vogel has paid the price for the Los Angeles Lakers’ poor campaign, as they failed [ ... ]
us-sports
British Invasion: WWE Announces Its First UK Stadium Show In...
WWE will host their first UK stadium show in 30 years this summer, with the American sports entertainment [ ... ]
us-sports
Giannis, Embiid Or Jokic: The Wide Open Race To NBA Most Valuable...
The race to become the NBA’s regular season MVP has never been tighter. Giannis Antetoukoumpo [ ... ]
us-sports
One Champ To Rule Them All: Lesnar Takes On Reigns On WrestleMania...
We are halfway through WrestleMania weekend, and now that you’ve finally processed what happened [ ... ]
us-sports
WWE’s Combat Sport Crossovers Have Given Us WrestleMania Moments...
This weekend, two former UFC Champions will headline WWE’s most marquee of events, WrestleMania. [ ... ]
us-sports
Return of the Rattlesnake: Stone Cold Leads WrestleMania Saturday
WrestleMania 38 is almost here, as WWE prepares to stage its biggest shows of the year. Nowadays, the [ ... ]
us-sports
The Show of Shows: The Best Match From Every Single WrestleMania
WrestleMania weekend is upon us, as WWE prepares to stage the 38th edition of the biggest event in professional [ ... ]
us-sports
The Lion and The Hyena: 25 Years On From The Most Important...
“These people are standing, can you imagine the pain that is racing through Austin’s body? [ ... ]
us-sports
Stone Cold Steve Austin Accepts Kevin Owens' WWE WrestleMania...
“Whether you want to call this ‘The KO Show’, a match, a fight, a brawl. Whatever. [ ... ]
us-sports
30 Years Since LA Lakers Retired Magic Johnson's 32, His True...
During this week, back in 1992, the LA Lakers chose to retire the number 32 jersey worn by the [ ... ]
us-sports
Michael Jordan At 59: The Man Who Changed What It Meant To Be...
In the summer of 1998, Michael Jordan won his final NBA Championship with the Bulls. Six months later, [ ... ]