Across the 2009/2010 campaign, managers Pep Guardiola and José Mourinho faced each other in the dugout four times. Though the relationship between the two men has been traced back to their youthful days as player and translator, respectively, that particular season over a decade ago set the tone for the definitive managerial rivalry of the subsequent decade.

But has the once magnetic, can’t-take-your-eyes off it, rivalry gone?

This weekend the two men met in north London, with Mourinho, appointed Tottenham Hotspur manager in November 2019, taking the spoils of war from Guardiola’s Manchester City. And war it most certainly was, although the two commanders preferred to let their footsoldiers play it out for themselves in feisty interludes on the pitch. A (missed) penalty, a sending off, a bit of bastardry, two well-taken goals.

In the dugout, the pugnacious Portuguese was certainly animated on the touchline, but couldn’t resist the occasional slump in those comfy sleek new N17 seats. And by full-time Guardiola looked as if he had been on the wrong (or is it right?) end of an exorcism.

The two generals are now 57 and 49 years of age: Mourinho a good eight years on his counterpart but the greys and whites are now truly embedded in beard and boff alike for the pair. The scene, less Alexander the Great against Darius at the Battle of Gaugamela, more two draconian Colonel Haigs, forcing their men to face the opposing battalion over the top. Bring back those days of yore?

Over a decade ago with FC Barcelona, Guardiola was attempting to become the first side to defend a Champions League title, with one of the most beautifully constructed and orchestrated football sides of the modern era. Mourinho meanwhile was in his second, and ultimately final, season with Internazionale, in what would turn out to be a peerlessly lucrative campaign at the expense of Guardiola’s Barça.

The group stages drew the two sides together, and though Barcelona topped the table, they failed to produce a positive result against Mourinho’s also-advancing Nerazzurri in two games. Meeting again in the knockout stages to see who advanced to the European Cup Final, it ultimately produced one of the most iconic moments in the competition’s history.

Taking a 3-1 result at their home ground of the San Siro, Inter travelled across to Spain for the return leg at Camp Nou. They were soon on the backfoot when Thiago Motta was dismissed before the half-hour mark, with Barça’s Sergio Busquets playing the villain once again.

Inter, however, locked the home side out for the next hour’s game time, but an offside Gerard Pique goal five minutes from time made for a frantic, hanging-in-the-balance conclusion. With Bojan’s potentially decisive goal ruled out to a crowd of 98,000, and the indignation of Blaugrana keeper Victor Valdes, Mourinho ran across the pitch after the full-time whistle was blown, arm aloft. It couldn’t have been less subtle if he had paraded the middle finger.

Mou and Inter were through, and a solid win over Bayern Munich at the Santiago Bernabéu Stadium later led to a historic treble. 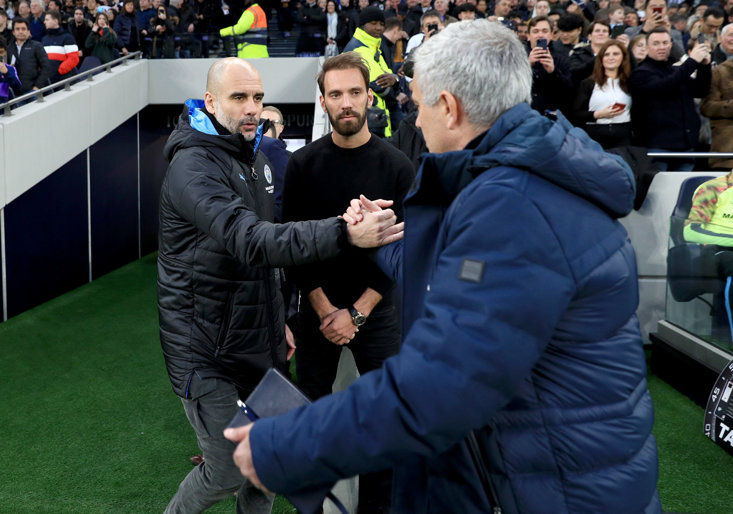 The Spanish capital wouldn’t take long to come calling again as the Pep v Jose rivalry was provided with its greatest theatre, when Mourinho left Inter to take over at Barça’s fiercest rivals Real Madrid, and in doing so elevating El Clásico as the premier event on the footballing calendar.

Mourinho had been the managerial poster-boy of the 2000s. The man who had won the Champions League in his homeland with Porto and determinedly disrupted the duopoly of Manchester United and Arsenal in the Premier League with Chelsea as they won their first top tier title in half a century. And then did it again.

37-year-old Guardiola’s appointment at the Blaugrana in 2008 rewarded the club with their own historic treble in his debut managerial season, the punt on the then-rookie reaping dividends. The decision by the Barca board fuelled reports of the more experience Mourinho’s discontent, the Portuguese coach having been out of work since departing Chelsea in the middle of the 2007/08 season.

The run-ins were thick and fast in April 2011 when 16 days produced four Clasicos, with the spoils split: Barcelona got revenge on Jose by reaching the Champions League final, Real Madrid won the Copa del Rey, and there was a 1-1 La Liga draw.

The nastiness of the managerial intensity reached its nadir when Mourinho poked the late Barca assistant manager Tito Vilanova in the eye on the touchline at the end of his first season, what no doubt helped Barney Ronay of The Guardian to categorise the relationship as ‘poisonous.’ Mourinho would finally disrupt Barcelona’s league dominance in 2011/12, procuring his only La Liga title (thus far).

The combat arguably began to dissipate after the overhype of their first Premier League meeting. Both men had taken up their positions at City and United in the summer of 2016. Their clash came in just the fourth game of the 2016/17 season, with Pep’s Citizens outplaying and outclassing Utd at Old Trafford.

City’s dominance in the next two seasons for back-to-back championships further diluted the intensity of the rivalry, leaving United in their dust in record-breaking style. The lack of challenge from the Red camp made it a somewhat missed opportunity.

The two-and-a-half year rivalry in charge of their respective Manchester clubs was somewhat cordial, particularly in contrast to the ferocity that had been exhibited in the earlier part of the tweenies, the tone retrospectively set when the one-time ferocious adversaries hugging on the Old Trafford touchline as City collected that 2-1 win.

The relationship could be seen as initially being tempered by Guardiola’s sabbatical after leaving Barcelona and his three years at Bayern Munich, denying fans the privilege of witnessing another dramatic duel for a good slice of the decade. Guardiola’s three Bundesliga titles with München, it must be said, has inevitably added wood to the fire for Pep purists: the tally now reads for both of them league conquests in three of Europe’s top five divisions each.

How long this duel will continue, remains anyone’s guess. Mourinho - recently annointed Mauricio Pochettino’s successor at Spurs - has a notorious, perpetual third-season syndrome, and is at his third Premier League club, whilst Guardiola has never stayed at a club longer than four years (he’s coming to the end of his fourth). Guardiola and Mourinho have now faced each other on a total of 23 occasions, more than they have against any other manager in their career.

The Spaniard holds the distinct advantage, winning 11 of their encounters. Mourinho has won six. Their meeting at the Tottenham Hotspur Stadium may have proven to be somewhat melancholic in the eyes of the football fan who has followed Guardiola and Mourinho’s individual trajectories and cross-paths.

Spurs v Manchester City didn’t necessarily scream blockbuster but this time around the teams certainly carried on the José/Pep legacy, even if the managers seemed more resigned to let the simmering embers between each other burn out.