We are halfway through WrestleMania weekend, and now that you’ve finally processed what happened on Saturday night, it's time to look ahead. Sunday promises even more WWE excitement, with an undisputed champion to be decided, an appearance from a bit of a Jackass and a ‘Rated R’ dream match. Here’s everything you’ve got to look forward to on WrestleMania Sunday.

The big one pits Universal Champion Roman Reigns against WWE Champion Brock Lesnar. Two champions will enter, and one will leave with all the gold. This will be the third time this pairing has closed ‘The Show of Shows’, but the stakes have never been higher. Seth Rollins cashed in his Money in the Bank briefcase during their ‘Mania 31 meeting, pinning Reigns to take the win. Lesnar was the victor at the 34th event, and now ‘The Tribal Chief’ is coming for revenge.

Reigns has been Universal Champion for 579 days, the longest run in the belt’s history. It is also the longest world title run anywhere in the company since Hulk Hogan’s 1980s pomp. But the intrigue here comes from the fact the dominant ‘Head of the Table’ has never conquered ‘The Beast’ on WWE’s biggest stage.

Celebrity involvement is a staple of WrestleMania, and we have two such offerings to look forward to on Sunday. Jackass star Johnny Knoxville has been feuding with Sami Zayn since the Royal Rumble. The dispute became more heated when Knoxville gave Zayn’s phone number out to fans, and the WWE Superstar has shared numerous videos of himself fielding harassing calls at all hours of the night. Knoxville is no stranger taking punishment in his day job, so it will be interesting to see how his famous pain threshold translates into a WWE ring.

The other mainstream star appearing will be ex-NFL footballer Pat McAfee. The popular former Indianopolis Colt commentates on WWE SmackDown these days, but he has stepped through the ropes before. McAfee surprised fans with his aptitude for sports entertainment in a brilliant match with Adam Cole in NXT. He dusted the trunks off once more to take part in a War Games match against Cole and his Undisputed Era colleagues. 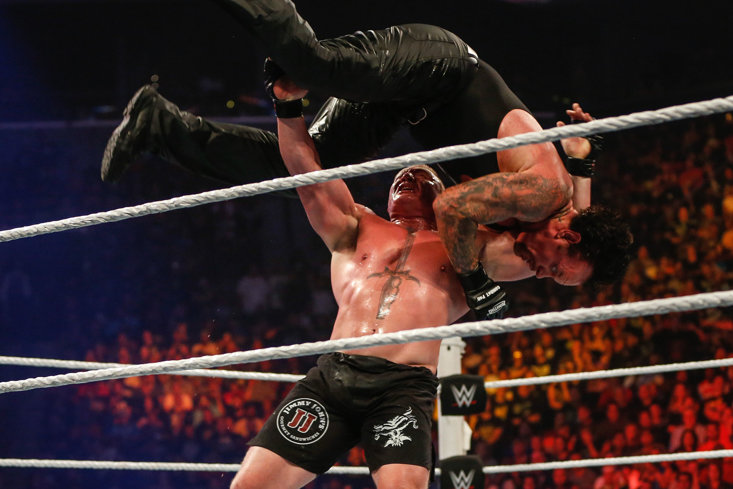 This weekend he will meet Austin Theory, at the behest of WWE Chairman Vince McMahon. The cocky, selfie-happy Theory is a perfect foil for the burly, macho energy of McAfee. This could be a really fun contest to break up the more serious, heated battles on the night.

‘The Rated R Superstar’ Edge will face AJ Styles in a genuine dream match. This super-fight looked lost to the sands of time when Edge retired in 2010 while ‘The Phenomenal One’ was in TNA. But Styles’ 2016 move to WWE, coupled with Edge’s stunning return to the ring in 2020, has made the fantasy a reality.

The build-up for this one has centred around Edge returning to a darker, heel persona. A more vicious, nastier side to the veteran should mesh well with the popular Styles’ high-flying offence in a real purist’s choice. This could easily be the match of the whole weekend.

Two sets of tag team titles will be on the line. The RK-Bro tandem of Matt Riddle and Randy Orton will defend their WWE Raw belts against Alpha Academy and The Street Profits in a triple threat match. Meanwhile, the WWE Women’s Tag Team Championship will be on the line in a fatal four-way pitting champions Queen Zelina and Carmella against Sasha Banks and Naomi, Rhea Ripley and Liv Morgan and Natalya and Shayna Baszler.

In case that wasn’t enough, ‘The All Mighty’ Bobby Lashley returns from injury to face the monstrous, 7’2 Omos. The big man has been feeding on opponents, sometimes two or three at a time, in recent weeks. He’s bound to have far more trouble dispatching the former WWE Champion.

WrestleMania looks set to draw to a blockbuster close, with a huge finale. Reigns and Lesnar is being promoted as the biggest match on the card, and with good reason. But I hope we’ve shown you there’s a lot more to WrestleMania Sunday than ‘The Beast’ against ‘The Head of the Table’.