Former WBC heavyweight champion Deontay Wilder will be honoured with a life-size statue in his hometown of Tuscaloosa, Alabama. Sporting figures usually get a monument when their careers are over, a recognition of the fullness of their achievements enhanced by context. While Wilder’s ten successful world title defences and part in perhaps the greatest heavyweight trilogy of all-time against Tyson Fury is more than worthy of being immortalised, it has emerged that ‘The Bronze Bomber’ might not be done just yet.

WBC president Mauricio Sulaiman has hinted that we haven’t seen the last of the 2008 Olympic bronze medallist. When asked about the 36-year-old knockout artist, Sulaiman said "I spoke to him a couple of months ago, he is doing great and he is looking forward to resuming his boxing career". Wilder had hinted at retirement in the wake of his third fight with Fury, an eleventh round stoppage loss last October, that he was done with the sport. After a few hard-earned months away, it appears the boxer is changing his tune.

If Wilder does come back, he’s chosen an intriguing time to do so. WBC, The Ring and lineal heavyweight champion Tyson Fury insists he is retired. Few believe ‘The Gypsy King’ will actually walk away, but if he does it leaves Wilder perfectly poised. ‘The Bronze Bomber’ is ranked number-one in the world by the WBC, meaning he would likely take part in any fight for the vacant title should Fury keep his promise and leave the sport.

Fury is unlikely to engage in a fourth fight with Wilder if he does battle on, and WBA, IBF and WBO kingpin Oleksandr Usyk is tied up with Anthony Joshua this summer. Therefore, Fury abdicating the throne is likely to be Wilder’s best chance of getting into title contention in the near future. The machinations of governing bodies are unclear, and the highest-ranked contenders are not always matched for the title. The highly-marketable Wilder being number one makes him a lock, but who are the possible opponents he could face in a title match? 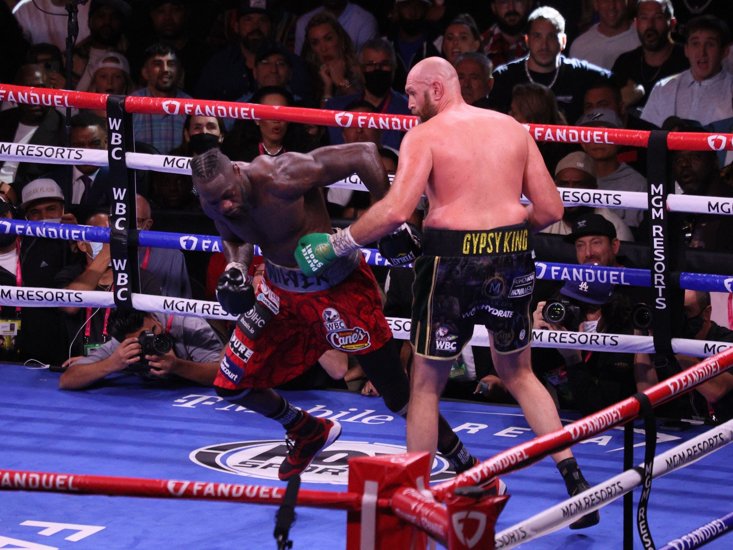 Joe Joyce and Joseph Parker appear to be out of the running for now. The WBC #2 and #3 look set to face each other in the UK at some point in the near future. Unbeaten Cuban Frank Sanchez is ranked fourth, and could pose Wilder some problems. He’s tough to hit and has an awkward style that can make for messy fights. A shootout with WBC number five Andy Ruiz Jr would be electric, perhaps one of the best heavyweight fights that can be made in boxing today. Ruiz Jr looks set to square off with former Wilder victim Luis Ortiz next, so depending on when Fury were to vacate, that fight might have to wait.

Arslanbek Makhmudov sits sixth in the rankings, and would make for an exciting opponent. He has 14 knockout wins from 14 fights. While the 32-year-old stepped up in class against Mariusz Wach last time out, his team may view Wilder as one for the future at this stage. Which brings us on to the intriguing proposition of the WBC’s number seven-ranked contender: Dillian Whyte.

‘The Body Snatcher’ laboured against Fury in his last bout, showing none of the power and grit Wilder had demonstrated against the same opposition. However, like Wilder, Whyte comes to fight. A bout between the pair, with redemption on the line for both as well as the big green belt, would be a marketer’s dream. In terms of a sure-fire ticket-seller, Wilder/Whyte is perhaps only rivalled by the aforementioned Ruiz Jr clash.

What is clear is that there is a litany of exciting options available for Wilder. If what Sulaiman says is true, it is a brilliant thing for boxing to have one of its finest recent heavyweights back in the ring. Taking Fury out of the equation, Wilder is right in the argument to be the best in the division. He would be an absolute handful for the Usyk/Joshua winner, and has built-in goodwill with fans for his brave efforts in the Fury trilogy.

Deontay Wilder might be getting a statue, but his career is not ready to be confined to the history books just yet.