Football
News
The Frenchman has established himself as one of the best defensive midfielders of all-time
Conor Keane
13:07, 30 May 2021

It has been known for some time but last night confirmed it. N’Golo Kante is the best ball-winning midfielder in the world.

Chelsea lifted their second Champions League title in Porto when they tactically out-classed and out-fought Pep Guardiola’s Manchester City. Kante was one of a Chelsea quartet to completely dominate the match. The midfielder, along with attacker and match-winner Kai Havertz and full-backs Ben Chilwell and Reece James were sublime in their individual battles throughout the match.

Kante’s performance was mesmerising – as they have been ever since he arrived on England’s shores six years ago. With what can only be described as an engine parallel to a steam train and a highly intelligent brain, the defensive midfielder has no equal in the game. His style is perfectly matched to the way Thomas Tuchel sets out his sides, compact and well-organised with desire out of possession.

At any point where City were looking to break through the thirds, Kante was there – always reading the game and anticipating where he needed to position himself to steal the ball from his opponents. Before he was substituted due to injury, Kevin De Bruyne was having a torrid time in the game with Kante never allowing him any space which the playmaker thrives off. One of the Frenchman’s best moments in the game came when he beautifully slid in to knock the ball away from De Bruyne in one of the few times that he had broken through Kante’s midfield barrier. 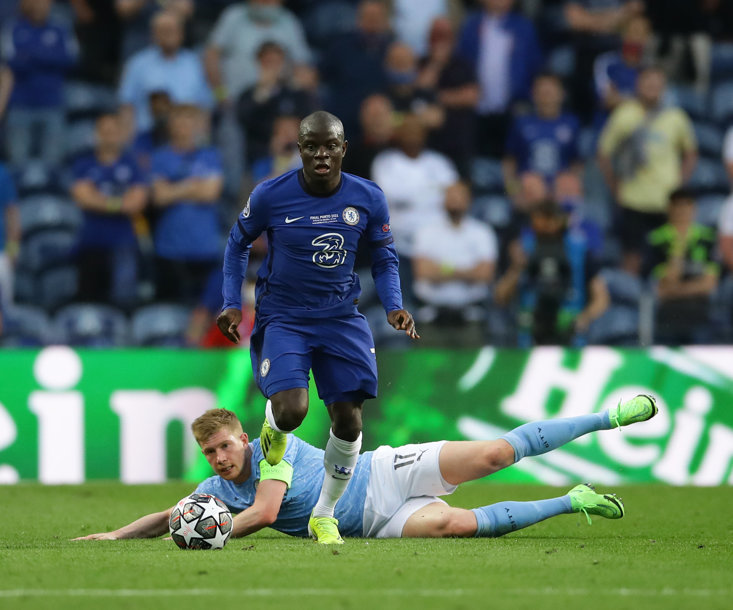 Every game he plays he covers so much ground and never gives up in the quest to recover the ball for his team and get them off on a break of their own. His performance on the biggest stage echoed his quality and how no player in his position comes near to his pedigree and his player of the match was fully-warranted. The 30-year-old was able to add it to his collection having won it three times already for his second-leg performance against Atletico Madrid in the round of 16 and for both semi-final ties against Real Madrid, a truly remarkable feat.

His Champions League performances have been mind-blowing and the midfielder would not look out of place holding this year’s Ballon d’Or award. In his time in England, he has won two Premier League titles, one FA Cup, one UEFA Europa League, one World Cup and now a UEFA Champions League. His accomplishments have matched his performances as he has established himself as one of the greatest defensive midfielders of all-time.

Any player who has an excellent Champions League campaign will always be in the conversation for the prestigious award and Kante would thoroughly deserve it for what he brings to this Chelsea side and what he has helped them accomplish. Even in the final alone, he managed to dominate and frustrate one of the best midfields in the world, stewarded by one of greatest managers in the history of the game.

With not much time to rest being a part of Didier Deschamps’ Euro 2020 squad, Kante will be looking to round off an amazing season by helping his national teammates extend their international dominance by becoming European champions. France has a very strong squad, like they did in Russia in 2018 and they are one of the favourites to win the tournament. If the French were to go on and win their second consecutive tournament with Kante central to their midfield, then the energetic midfielder stands a great chance of being the 2021 Ballon d’Or recipient.