It was four days ago that Wigan Warriors announced that controversial back Zak Hardaker would leave the club with immediate effect. Within the announcement came the reasoning that the former England international would return to his “family base in Yorkshire to pursue career opportunities closer to home”.

Today it was announced that he is to return to Leeds Rhinos until the end of the 2022 Betfred Super League campaign for a second spell at the club where he won four Grand Finals, two Challenge Cups and a League Leaders’ Shield between 2011 and 2016.

The first point of interest is the contract given to Hardaker upon his return. Rhinos chief executive Gary Hetherington said of the signing: “The short-term contract works for all parties in this unique situation.”

Short-term contracts aren’t unfamiliar in rugby league, with players whose careers sit in limbo often finding themselves at teams who are willing to pay them for their services to help them survive in their league or provide cover for injuries. In this case, Leeds are covering for both after injuries to Harry Newman and Jack Walker in the full-back and centre positions. Hardaker was the league’s Man of Steel in Leeds’ treble-winning season back in 2015 playing the full-back role, but more recently found himself playing centre for Wigan after being outshone in the role by first Bevan French and then Jai Field.

The second point of interest is in Hardaker’s reaction to being picked up by Leeds once again. Speaking to the Leeds Rhinos website, he said: “I was surprised and overwhelmed when Leeds came calling.” Hardaker left the struggling Rhinos in 2016 for the NRL, playing a part in Penrith Panthers’ semi-final run.

Upon the end of his loan, he was gone again to Castleford for a year, before signing a permanent four-and-a-half year contract at the Tigers which was later terminated after he tested positive for cocaine ahead of Castleford’s first ever Grand Final appearance. 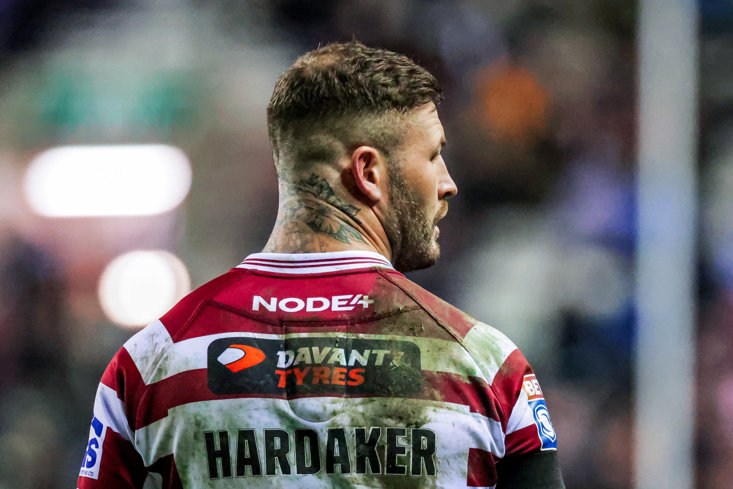 Hardaker clearly believed that obstacles remained in the way of a potential reunion with Leeds, but the club are in dire straits so far this season, having won just twice in their first 10 Super League games.

It’s been a long journey for Zak and his family during recent months, with Wigan calling time on his spell at the DW Stadium after he fell short of their expectations off the field. Having given him the benefit of the doubt over a drink-drive charge shortly after being signed for the 2019 campaign, the club had hoped he would stay on the straight and narrow on the west side of the Pennines.

He had actually begun to find form in the Cherry and White jersey this season, having his best game of the year so far in the Challenge Cup against Wakefield Trinity in what turned out to be his final game in a Warriors shirt. Continuing that form shouldn’t be a problem for such a naturally gifted player of the game, but interim boss Jamie Jones-Buchanan and incoming head coach Rohan Smith have to make sure that the short-term solution they signed stays out of his own way, for his own good and the club’s.

Consistent playing time in a happy environment could work wonders for a player who’s wanted to be closer to home for a while now, and that might be just what Hardaker needs to rediscover what made him the best full-back in the league seven years ago. If he stays out of trouble, Leeds should survive this season with his expertise in the No.1 position, and he might even find himself signed again next season if Smith can trust him to lead the Rhinos.

Hardaker will get his first crack at redemption in the Leeds jersey against Hull Kingston Rovers at Headingley on Friday night, but time will tell if this is a shrewd move from the Rhinos.