Tennis
News
Jabeur, a winner in Berlin at the weekend, teams up with Williams in the doubles at the Rothesay International
Hector Nunns
15:01, 20 Jun 2022

As Serena Williams rocks up in sunny, sleepy Eastbourne this week, arguably the sport’s greatest player might permit herself a rueful smile each time she passes one of the many retirement homes in the East Sussex resort on England’s ‘Sunshine Coast’.

Being somewhere people slip off to enjoy their post-work careers in relative peace and quiet is about the only thing this part of the world has in common with Florida in the USA, where the winner of 23 grand slam singles titles is already based at the tender age of just 40 – significantly bringing down the average age north of Miami - in a dream multi-million dollar mansion designed by Serena herself along with sister Venus.

The time may be looming when Serena packs away her rackets for the final time, but that day has not yet come. And injuries and fitness permitting, a sporting icon will make her first appearance on court in a competitive tournament since breaking down at Wimbledon last year with Tunisia’s Ons Jabeur in the doubles at the Rothesay International - although Williams cancelled her scheduled afternoon practice on Monday, opting to take the day off.

With the seagulls swooping over the courts and the deckchairs out around the grounds, a player that has built up an estimated fortune on and off the court of up to £200million will test out her physical state ahead of a planned trip to SW19 later this month, where she has of course been granted a wildcard having expressed the intent to play.

And the privilege and honour of playing alongside her in the doubles has fallen to Jabeur, a winner in Berlin at the weekend – a success that saw her rise to a career-high No3 in the world rankings, the highest ever ranking for either an Arab or African player on either the WTA or the men’s ATP. The pair are due to play Marie Bouzkova and Sara Sorribes Tormo

With so much interest in her partner, a laughing Jabeur insisted on Monday that plenty of fellow players had expressed a degree of good-natured jealousy that she had been hand-picked by the Williams camp. The request came before the French Open, kept a closely guarded secret for weeks.

Jabeur, now a real contender for the singles title at Wimbledon but hoping to avoid Serena in the first-round draw there, said: “I am a good secret-keeper…though I did tell some of those closest to me, the family and one friend. It was tough not to say it, because I was super-excited.

“Serena is such a fighter on the court, I really admire her story and everything that she did for us and women’s tennis. I have been lucky to be on tour with her for a little bit, she has spoken to me and recognised me and knew my name way back in 2017. She is an inspiration and the fact we are playing doubles together is a huge deal for me. I never expected her to pick me. 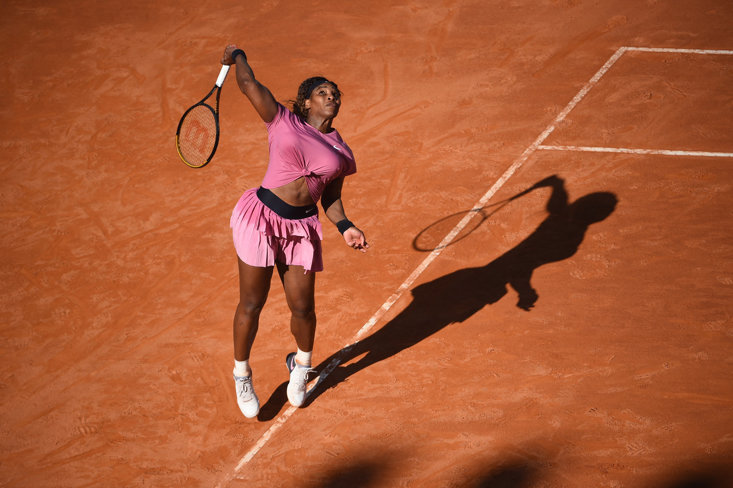 “And just thinking about it takes me way back and all the memories of watching her winning grand slams. I hope it doesn’t make me too nervous standing next to her. When we spoke about this we didn’t really talk about tennis at all. I love kids and Olympia is so cute.

“It came about through Venus’s coach Eric asking my coach if I was playing doubles here, and I didn’t need a second to say yes. I am really pumped, and I’d love to win the title here. Many of the players have said they are jealous because I am playing with her. And we know she is a legend, and being part of her journey as she returns is unbelievable.

“If I can learn even two per cent and improve just from playing with her and being around her, that would be amazing. And maybe I’ll say to some of the other players now if they have less than 20 grand slam singles titles, then don’t even ask me to play with them!"

Venus has stated that the Williams family see Jabeur as another trailblazer, having become a huge role model for women players in the Arab world and continent of Africa – and this may well have led to the invitation.

Jabeur added: “Yeah, maybe. They did much more than me, obviously, but I got inspired by them, what they did for our sport, for everything. I have to say again, their stories are inspiring.  For me, I may be similar but I'm coming from a small country. So many girls are dreaming to become tennis players but they don't have, maybe models to believe in.

“They can see a lot of other players but not from Tunisia. If I'm doing this now I hope I can inspire this generation and really see more and more of our players on tour.

“I am only playing doubles this week having won in Berlin at the weekend, I felt doing the singles as well after winning in Berlin would be too much. I want to be ready to really go for three weeks with Wimbledon next. I am feeling okay, but maybe I learned from the past.”