Boxing
News
The decision to allow a boxer to compete after testing positive is a stain on the sport
Joey Mills
11:55, 06 Sep 2021

WBC super featherweight champion Oscar Valdez has tested positive for the banned substance phentermine ahead of his fight with unbeaten Robson Conceicao on Friday. So surely that means the fight is off? A lengthy suspension for the champion? The WBC stripping him of the title? If you answered “don’t be silly” to all three then congratulations, you are a true boxing fan. The fight remains on, the title remains on the line and the champion remains free to fight.

It is impossible to imagine any other mainstream sport where this would be the case. While drug use is prevalent in other sports, it is usually dealt with when the matter becomes public. A failed test will get you a ban, and in many cases even a failure to make yourself available to test will incur similar. Just ask Rio Ferdinand.

Boxing does have form in this area. Manuel Charr was set to defend his minor WBA title against Fres Oquendo in 2018 when the fight was cancelled due to the champion failing a drug test. While the fight did not take place, Charr was allowed to keep hold of his championship, and was only stripped of it in January of this year. The official reason given was inactivity, after a Don King-promoted title defence fell through due to visa issues. The dethroned champion is pursuing legal action against the infamous old promoter, but it is hard to buy into his sense of injustice after being allowed to remain as a belt-holder despite a positive drug test.

Valdez will be fighting under the jurisdiction of the Pascua Yaqui Tribe Athletic Commission, who subscribe to the rule of the World Anti-Doping Association. The WADA rule that phentermine is permissible in the system up to 11:59pm on the day before a fight. By the letter of WADA law, the fight should go ahead. However, the fight contract stipulates that the Voluntary Anti-Doping Association would carry out the testing for the fight, and their ruling is more black and white. You either have banned substances in your system, or you do not. 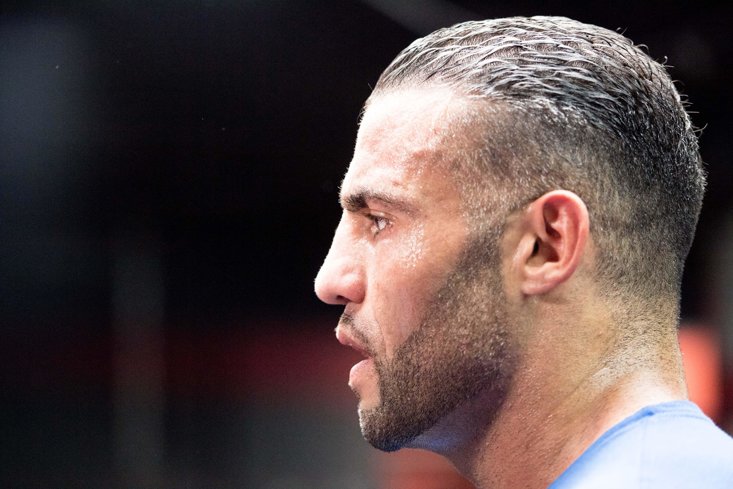 MANUEL CHARR HAD A FIGHT CANCELLED AFTER FAILING A DRUGS TEST

The complication here comes from the concept of adjudication. While the VADA carries out the actual testing, it is up to the WADA to decide how the results are interpreted. In this case, they have chosen to essentially ignore them. As with the proliferation of conflicting alphabet championships, it appears boxing has a problem with multiple organisations disagreeing with each other on the matter of drug testing.

While it is scant consolation, at least in this case the nature of the substance used will have no impact on Valdez vs Conceicao on the night. Phentermine leaves the system after 48 hours, and Valdez has posted negative results in subsequent tests. However, the issue here is surely a moral one. Boxing should not turn a blind eye to those who use performance enhancers. More than any other sport, the implications could be severe. While all cheating is unscrupulous, in boxing it can result in real and lasting physical damage.

Rather than hiding behind loopholes and discrepancies between WADA and VADA rulings, boxing should take a zero-tolerance approach. Unfortunately, in a woefully under-regulated sport where fights get made based on potential revenue over sporting merit, exceptions will continue to be made. Valdez is a 29-0 two-weight world champion, and a marketable name. Therefore every care has been taken to get this fight into the ring. One fears that he will not be the last boxer whose commerciality is cherished over his scruples.

x
Suggested Searches:
Manchester United
Liverpool
Manchester City
Marcus Rashford
Premier League
More
boxing
Oleksandr Usyk Puts In Boxing Clinic Against AJ To Take Heavyweight...
You’d be forgiven if you’re starting to grow a little weary of hearing ‘Sweet Caroline’ [ ... ]
boxing
Okolie Cruises To Victory In First World Title Defence On AJ...
The first defence of Lawrence Okolie’s WBO cruiserweight crown ended swiftly on the undercard [ ... ]
boxing
The Rebuild Begins For Callum Smith As He Steps Up To Light...
Callum Smith was the best super middleweight in the world. The Liverpool fighter was the latest outstanding [ ... ]
boxing
Anthony Joshua Weighs In 19lbs Heavier Than Usyk Ahead Of Heavyweight...
Anthony Joshua has weighed in at 240lbs ahead of his heavyweight showdown with Oleksandr Usyk this weekend, [ ... ]
boxing
Okolie Is The Latest In A Proud Line Of British Cruiserweight...
Anthony Joshua will not be the only British world champion stepping into the ring at the Tottenham Hotspur [ ... ]
boxing
Anthony Joshua vs Oleksandr Usyk Is Fight Of The Year, Says...
Ahead of Oleksandr Usyk’s heavyweight showdown with Anthony Joshua at the Tottenham Hotspur Stadium, [ ... ]
boxing
From Mike Tyson To Mr. Dream, How Punch-Out!! Defined Boxing...
Only 55 men truly know what it is like to face ‘Iron’ Mike Tyson. But a generation of gamers [ ... ]
boxing
Anthony Joshua Treating Oleksandr Usyk Fight Like Just Another...
Anyone expecting fireworks akin to Canelo and Caleb Plant’s presser might have been left disappointed [ ... ]
boxing
Six Of The Best: Famous Boxing Father And Son Duos
Campbell Hatton faces Sonni Martinez this weekend in his fourth professional fight. While the Manchester [ ... ]
boxing
A Usyk Win Could Derail AJ-Fury, But Bring Us An Undisputed...
When the dust settles and Anthony Joshua vs Oleksandr Usyk is in the record books, fans and media alike [ ... ]
boxing
Eubank And Watson Made History That Should Never Be Repeated
Every boxing match is a roll of the dice. Fans demand ferocity and violence. They roll the dice and [ ... ]
boxing
Next Best Thing: Why Usyk Is The Best Opponent AJ Could Have...
Anthony Joshua steps into the ring with Oleksandr Usyk on Saturday, defending his WBA, WBO and IBF world [ ... ]
boxing
Start Time? Undercard? How To Watch? Everything You Need to...
Anthony Joshua’s IBF, WBA and WBO belts will all be on the line this weekend when he takes on [ ... ]
boxing
Dillian Whyte To Fight Otto Wallin, Five Boxing Stories You...
Dillian Whyte could face a tough heavyweight test in October, Jake Paul is helping to make a women’s [ ... ]
boxing
Bridge Over The River Why?: WBC Confirms First Bridgerweight...
Boxing has a new world championship in a brand new weight class, as Oscar Rivas and Bryant Jennings [ ... ]
boxing
Crawford vs Porter: Top Welter Scrap Can Cure Boxing Of Its...
WBO welterweight champion Terence Crawford will meet former two-time belt-holder Shawn Porter on 20th [ ... ]
boxing
Tales From The Crypto: Amir Khan Fronts Bizarre Finance Influencer...
You have seen your favourite YouTubers knock out basketball players. You have seen MMA fighters destroy [ ... ]
boxing
Atrocity Exhibition: Boxing Must Stop Encouraging Fighters Like...
Evander Holyfield is no stranger to unedifying ends to a career. ‘The Real Deal’ has reached [ ... ]
boxing
Tyson Fury Shares Career Bucket List, Five Boxing Stories You...
Tyson Fury has mapped out his ideal boxing bucket list, Donald Trump is back and Billy Joe Saunders [ ... ]
boxing
Anthony Joshua's Ferocious Punching Power The Key Against Usyk,...
There’s a little over a fortnight to go until the showdown between WBA, IBF, WBO, and IBO heavyweight [ ... ]
boxing
First Line Of Defence: When The Best Brits Put Their Belts On...
Sunny Edwards was set to defend his IBF Flyweight championship against Jayson Mama on Saturday at the [ ... ]
boxing
When They Were Kings: Triller’s Old Guard Have Seen Better Days
Propped up by a mixture of celebrities, retired fighters, influencers and the odd rising boxer, Triller [ ... ]
boxing
When Wladimir Klitschko And ‘The Next Tyson’ Saved The Heavyweight...
Former WBC heavyweight champion ‘The Nigerian Nightmare’ Samuel Peter turns 41 today. Despite [ ... ]
boxing
Lara Slice Puts Warrington Redemption On Ice
Josh Warrington stormed into Headingley to the strains of ‘I Predict A Riot’, but not even [ ... ]
boxing
Triumphant Taylor And Heroic Hughes Highlight Warrington vs...
There is no question that Josh Warrington drew the large and vocal crowd to Headingley, to watch him [ ... ]
boxing
Influencers Need Not Apply: Fury, Joshua and Canelo Lead Boxing’s...
Last weekend, Jake Paul “treated” us to the latest chapter in his boxing odyssey. Next Saturday, [ ... ]
boxing
Josh Warrington Admits Pressure Is On As He Seeks Revenge Against...
Josh Warrington is gearing up for a shot at revenge on Saturday night when he takes on Mauricio Lara [ ... ]
boxing
Undisputed vs Undisputed: A Future Fight Between Serrano And...
Among the YouTubers and gross mismatches on show in Cleveland, Ohio on the Jake Paul vs Tyron Woodley [ ... ]
boxing
A Night At The Circus: Paul Squeaks Past Woodley As Tommy Fury...
Jake Paul moved to 4-0 (3 KOs) last night with a split decision victory over former UFC champion Tyron [ ... ]
boxing
Angelo Dundee: Three Masterpieces From Boxing’s Greatest Trainer
Perhaps the greatest cornerman of all-time, Angelo Dundee guided the careers of sixteen world champions [ ... ]