Football
News
All of Mourinho’s defeats as Spurs boss have come to younger men, just as his last four in charge of Man United
Richard Jolly
08:55, 01 Mar 2020

When Jose Mourinho was 41, he won the Champions League. When Frank Lampard was 41, he recorded the first league double over a certain double Champions League-winning manager. When Mourinho was in his early thirties, he was lured to Barcelona as an assistant manager. When Julian Nagelsmann was in his early thirties, he rejected the opportunity to manage Real Madrid.

It is a moot point where those who make history become history, when the brash face of well-dressed, sardonically witty modernity becomes yesterday’s man and yesterday’s manager, but the last couple of weeks offer damning evidence for Mourinho. He lost to a manager 24 years younger than him, when Nagelsmann’s RB Leipzig beat Tottenham, and then again to one 15 years his junior, when Lampard made it a second win in a couple of months over a mentor.

Mourinho predicted Chelsea would play a back three last week. He set up with a similar system, did it far worse and his incoherent team were deservedly defeated. Now for another reunion with a former charge. Tottenham host Wolves on Saturday. In one respect, Mourinho got the better of Nuno Espirito Santo, Porto’s reserve goalkeeper in 2004, in a 2-1 triumph at Molineux in December.

In another, it was an act of larceny. Wolves were the superior side and while Spurs’ tactical fouling of Adama Traore worked to some degree, he still tormented them and the scoreline was deceptive.

Perhaps it was, too, when Nagelsmann’s team won in London. It was a 1-0 thrashing. The 32-year-old is at the forefront of the Germanic thinking that is increasingly influential, emphasising pressing at pace, almost devised as a reaction to Mourinho’s trademark brand of football, with his low block and focus on tactical and positional discipline. The answer to efficiency came in the form of energy.

Three of Mourinho’s last four defeats were to like-minded thinkers. Jurgen Klopp and Ralph Hasenhuttl are old enough to be Nagelsmann’s father but they have more in common with the managerial wunderkind than Mourinho. They belong to the younger generation philosophically, even if both the Liverpool and Southampton managers were born in the Sixties. 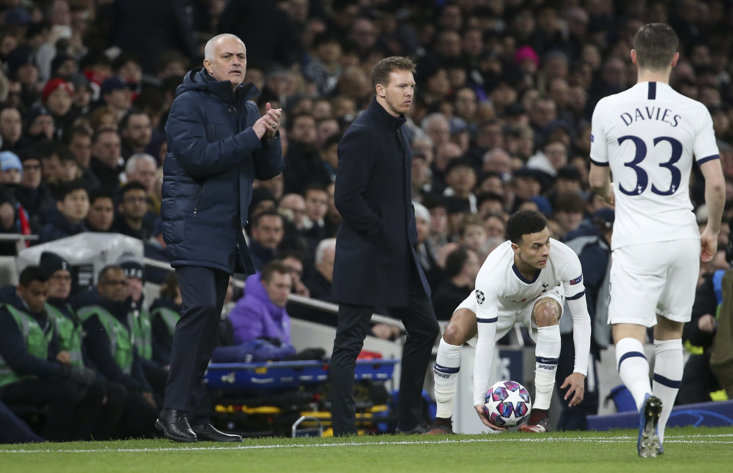 And all of Mourinho’s defeats as Tottenham manager have come to younger managers, just as his last four losses in charge of Manchester United did. In one sense, that is unsurprising: he is the fourth oldest manager currently in the Premier League and he has not faced the three senior figures, in Roy Hodgson, Carlo Ancelotti and Steve Bruce, though he did begin his reign by beating Manuel Pellegrini, born a decade after him and sacked by West Ham a month after Mourinho’s debut win with Spurs.

Yet he is being outwitted by relative rookies. Mourinho can cite mitigating circumstances, especially the absence of Harry Kane and Heung-Min Son, even if he may protest too much, but the danger is that he is losing football’s generation game. It is also intriguing that so few of his former allies play Mourinho-style football: not Nuno or Lampard or Brendan Rodgers or, during his days at two English clubs his compatriot has also managed, Andre Villas-Boas.

It only leaves his former assistant Aitor Karanka looking a true Mourinho disciple in his defensiveness. Lampard is a particular case in point. His Chelsea and Derby teams have lacked the watertight rearguards Mourinho used to forge, but by playing 3-4-2-1 – also Nuno’s favourite formation – against Spurs he has excelled at getting players into space. His greatest tactical triumphs have come against the manager who took him to a peak as a player.

That Lampard has not set out to emulate Mourinho is instructive: it suggests he feels it would be regressive to try. He has not sought to ape his negative rhetoric. Nor has Nuno.

Two men who played for the Portuguese in his golden 2004, when the arrogant arriviste arrived on the European and then English scene, seemed to cast a gaze over older managers and decide he was the future, would deny it with their words but their actions suggest Mourinho – or at least aspects of his management – increasingly belongs in the past.