Boxing
News
Even at 42, the Filipino boxing legend is still targeting the sport's very best opponents
Gary Maiden
17:05, 26 May 2021

Where to begin with Manny Pacquiao?

Boxing’s only eight-division world champion would be forgiven for putting his career inside the ring behind him, given that he plans to run for president of his native Philippines next year.

However, as we know, boxing is a sport that many of its greatest names struggle to walk away from. Fighters are creatures of habit, and the repetition of preparing for a fight is something that they crave.

Having said that, if ‘Pac Man’ isn’t ready to call time on his illustrious career, who could begrudge him a couple of easy pay days before hanging up the gloves? He’s more than earned that right.

What’s that? He’s challenging Errol Spence Jr for his WBC and IBF welterweight titles? The same Errol Spence Jr that features in a whole host of pound-for-pound lists? You bet he is.

This is Manny Pacquiao we’re talking about. He isn’t like the others. The Filipino legend has been fighting in the professional ranks for over a quarter of a century. For context, when he made his pro debut back in January 1995, Saul ‘Canelo’ Alvarez was four-years old, the birth of Conor Benn was still four months away, and Errol Spence Jr himself had only celebrated his fifth birthday a matter of weeks earlier. 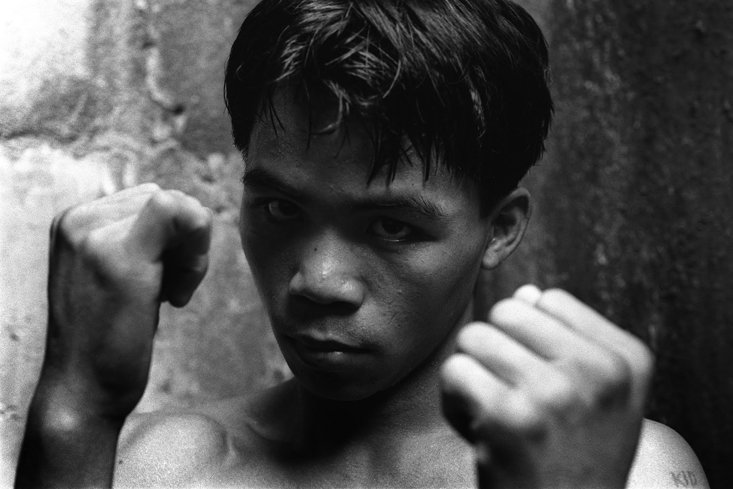 Errol Spence was just five when Manny Pacquiao made his debut

As recently as 2019, Pacquiao became the oldest welterweight champion in the history of the sport when, at the age of 40, he outpointed the highly rated Keith Thurman in Las Vegas. Such an achievement becomes even more incredible the further down the weights you go, when fighters rely on their reflexes more than in the heavier divisions.

So, what exactly does ‘Pac’ still have left to prove? In short. Nothing. But as previously mentioned, he isn’t like any other fighter.

In Spence Jr, he is facing an opponent in his prime and with some serious wins under his belt. In the last four years alone, ‘The Truth’ has beaten Kell Brook, Mikey Garcia, Shawn Porter and Danny Garcia.

Speaking last year, Pacquaio’s long time trainer Freddie Roach admitted that he only has a couple of fights left, saying, “I think Manny will fight once or twice more before he becomes the president of his country. And then he will retire.”

In reality, the time and effort that it will take to successfully navigate leading his country as president simply doesn’t allow for a boxing career on the side. With that in mind, if this is to be Pacquiao’s last hurrah, what a way to sign off from a sport that loves him so much.

His twilight years in the sport are a far cry from those of his one-time rival Floyd Mayweather. As alluded to earlier, Mayweather has fought the very best in a career that also spans close to a quarter of a century, and has more than earned the right to fight whoever he wants at this stage of his boxing life.

Falling short of criticising a fighting legend, it is simply worth pointing out that Mayweather’s last fight was back in 2017 against a UFC fighter in Conor McGregor, and he is currently pulling off another marketing masterclass as he prepares for his June 6 showdown with YouTube sensation Logan Paul. 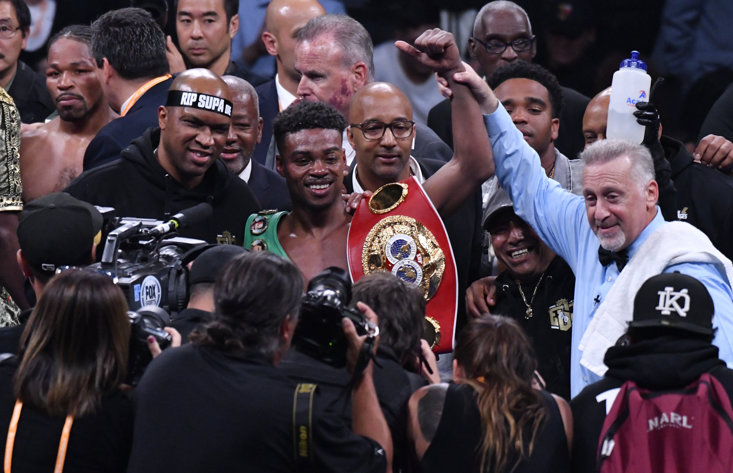 In the near four years that have passed since that Mayweather v McGregor bout, Pacquiao has successfully defended the WBA welterweight belt against Adrien Broner and Thurman.

His legacy in the sport is beyond question. Fight fans of a certain age will remember his dominant display against Hall of Famer Oscar De La Hoya in 2008, and his upset victory over Marco Antonio Barrera five years earlier that sparked a stunning rivalry with a string of Mexican fighters. After that De La Hoya fight, he stopped Ricky Hatton and Miguel Cotto before playing his part in the richest fight of all time against Mayweather himself.

With a reported net worth of $220m, there is no real reason for Pacquaio to be taking in a fight of this magnitude at this stage in his career. He loves to fight, and we love him for it.

Make no mistake, the 42-year-old remains more than live in this fight, and Spence Jr will know exactly that. No matter the outcome, Manny Pacquiao has already established himself as one of the greatest boxers of all time.

However, a victory over Spence Jr may just be his best yet.

x
Suggested Searches:
Manchester United
Liverpool
Manchester City
Marcus Rashford
Premier League
More
boxing
Joe Joyce To Face Carlos Takam In July, Five Boxing Stories...
Awkward face offs, heavyweight showdowns and another important step for the advancement of women’s [ ... ]
boxing
Inoue, Charlo And Munguia Top A Bumper Weekend Of Boxing
Teofimo Lopez may not be fighting this weekend after testing positive for Covid-19, but there remain [ ... ]
boxing
From Rocky Road to Richards: Fielding On Canelo, The Caymans...
It was a surreal moment when Lerrone Richards crooned ‘Hot Cross Buns’ down a Sky Sports [ ... ]
boxing
Matchroom Fight Camp Returns With Conor Benn Headlining Opener
Eddie Hearn and Matchroom Boxing have announced the return of Fight Camp this summer with Conor Benn [ ... ]
boxing
Claressa Shields Wins On MMA Debut, Five Boxing Stories You...
Claressa Shields crossed over to MMA and won, Billy Joe Saunders is considering retirement after his [ ... ]
boxing
Daniel Dubois Targeting World Heavyweight Title, And Wants Joe...
After Daniel Dubois’ successful return at the weekend in stopping Bogdan Dinu inside two rounds, [ ... ]
boxing
Third Time Lucky - Emotional Frazer Clarke Finally Secures Olympics...
After securing a place at this summer’s Tokyo Olympics, Frazer Clarke becomes the latest Team [ ... ]
boxing
Logan Paul-Floyd Mayweather: Where Will The Farcical Celebrity...
No judges. No official record of the fight. No winner. Unless of course, you are Floyd Mayweather, who [ ... ]
boxing
How Logan Paul Went From The Internet's Biggest Disgrace To...
On December 31 2017, Logan Paul uploaded a video that would make him the internet’s number one [ ... ]
boxing
Daniel Dubois Bounces Back From Joe Joyce Defeat With Second-Round...
British heavyweight hopeful Daniel Dubois made short work of his return to action following his 2020 [ ... ]
boxing
Floyd Mayweather vs Logan Paul: Everything You Need To Know
The exhibition between 50-0, five-weight world champion Floyd Mayweather and 0-1 YouTube extraordinaire [ ... ]
boxing
Bradley Skeete Targeting World Title Ahead of Fightzone Return
Former British and Commonwealth welterweight champion Bradley Skeete makes his return to the ring on [ ... ]
boxing
Deontay Doubles Down On Cheating Claims, Five Boxing Stories...
Deontay Wilder refuses to drop accusations that Tyson Fury cheated against him, Jake Paul has ensured [ ... ]
boxing
Mayweather Will Beat Logan Paul Then Fight Jake, Says Former...
Ahead of Floyd Mayweather’s curious exhibition match with YouTuber Logan Paul in Miami this weekend, [ ... ]
boxing
Tommy Fury Deserves Credit For Avoiding Boxing’s Shortcuts
Instagram followers: 3.4million Twitter followers: 232,500 TikTok likes: 257,400 The above is a quick [ ... ]
boxing
Jake Paul's Next Foe Tyron Woodley Is A Different Beast Entirely...
YouTube sensation Jake Paul is set to fight former UFC star Tyron Woodley in what will be his fourth [ ... ]
boxing
What Would The Fallout Be If Logan Paul Was To Beat Floyd Mayweather?
We’ve been here before.  “All it takes is one punch and Conor McGregor’s got [ ... ]
boxing
Nonito Donaire Is Back On Top And Has Sights Set On A Monster...
Nonito Donaire last night proved that Manny Pacquiao isn’t the only fighting man from the Philippines [ ... ]
boxing
Devin Haney Survives Late Scare Against Jorge Linares, Calls...
Devin Haney survived a late scare against Jorge Linares in Las Vegas on Saturday night to successfully [ ... ]
boxing
Devin Haney Looks To End Jorge Linares’ Incredible Matchroom...
Devin Haney defends his WBC Light Welterweight title against veteran Jorge Linares on Saturday night, [ ... ]
boxing
Kash Ali Targeting World Title After Dominant Stoppage Win
Kash Ali was true to his word in stopping Tomas Salek to win the vacant IBF European heavyweight [ ... ]
boxing
Kash Ali Promises To Let Some “Big Bombs Go'' Ahead Of Big Night...
Friday night boxing is back with a bang. Kash Ali (18-1) headlines the Sheffield show this Friday as [ ... ]
boxing
Cris Cyborg Could Take On Katie Taylor Next Year, Five Boxing...
The boxing world might still be abuzz from the fallout of Tyson Fury and Anthony Joshua’s heavyweight [ ... ]
boxing
Lack Of UK Coverage On Josh Taylor Fight An “Utter Disgrace,”...
Josh Taylor etched his name into the boxing history books last weekend when he beat Jose Ramirez to [ ... ]
boxing
'Dynamite' Dubois Ready To Reignite His Young Career Against...
It seemed like the entire boxing world turned against Daniel Dubois when he took a knee to hand Joe [ ... ]
boxing
From Terence Crawford To Teofimo Lopez, Who Could Josh Taylor...
Josh Taylor took a giant leap into the history books after beating Jose Ramirez in Las Vegas this [ ... ]
boxing
Like Buchanan Before Him, Josh Taylor Is Ready For A Place In...
All the talk this week might be about the undisputed fight that isn’t happening anytime soon [ ... ]
boxing
Caleb Plant Welcomes Canelo Challenge, Five Boxing Stories You...
Sick of the Anthony Joshua, Tyson Fury, Deontay Wilder and Oleksandr Usyk merry-go-round yet? AJ and [ ... ]
boxing
Josh Taylor “Has The War Paint On” As Tartan Tornado Prepares...
IBF and WBA light-welterweight champion Josh Taylor will be looking to etch his name in the history [ ... ]
boxing
He’s A Boxing Legend But Bob Arum Has Dropped The Ball On Joshua...
The heavyweight unification clash between Anthony Joshua and Tyson Fury is teetering on the edge of [ ... ]