Football
News
The Belgian has left the club after eight years at Anfield
Conor Keane
16:36, 09 Jun 2022

He might not have played much over the years but that didn’t stop Divock Origi becoming a cult hero in his time at Liverpool Football Club. The striker, who has officially left the club following the expiration of his contract, delivered some of the defining moments of their recent history.

He spent eight years on Merseyside, having been signed by Brendan Rodgers in 2014. On paper he will not have had the career at Anfield that either he or the supporters would have hoped for after his bright World Cup campaign for Belgium in 2014, but he has still managed to achieve legendary status thanks to timely goals.

We breakdown the best moments of his eight-year stint at Anfield.

It might have been Dejan Lovren’s late header which left the lasting memory as Liverpool completed an epic comeback to overturn a 4-2 aggregate deficit on an unforgettable Anfield night, but Origi had netted in both legs already by that point. His cool first-half finish in the opener at Signal Iduna Park was just the start the Reds needed in the tie, and after early struggles in a Liverpool shirt it was exactly what Origi had searched for in his attempts to become a part of the furniture.

An acrobatic effort, but more than that a vital one. Origi’s 94th-minute goal levelled up this absolutely nuts encounter at 5-5 to sent a memorable fourth-round clash to penalties. He’d already equalised once at 4-4, but this one was a composed finish on a night when everyone seemed to be losing their heads, leaving his feet to volley home a right-wing cross. He also when on to net one of Liverpool’s spot kicks as they triumphed 5-4 from 12 yards. 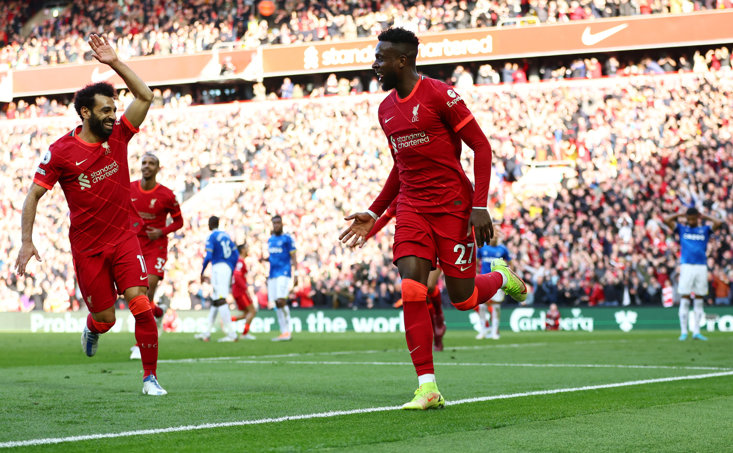 While Origi’s role in the Liverpool side was limited, he made himself quite the tormentor of the Reds’ rivals Everton in the Merseyside derby. He scored six times in the Premier League against the Toffees, with only Steven Gerrard scoring more than him (nine). The most memorable of those strikes was the dramatic last-minute winner which nobody who saw it will ever forget. After Jordan Pickford slapped Virgil Van Dijk’s effort back into play, Origi stooped to head the ball into the net and claim bragging rights for the red side of the city.

“Corner taken quickly…” Ask anyone on Merseyside what comes next and you’ll get a 100 per-cent hit rate. Trent Alexander-Arnold fooled the sleepy Barcelona players with a quick corner that caught them all off guard as Origi was perfectly positioned to fire home. The comeback from 3-0 down was complete and Liverpool were off to the final. “Corner taken quickly, Origiiiiiii!”

This goal has to be given as the pick of the bunch as the best of Origi’s 41 goals for the Reds as it sealed them their sixth European title in Madrid at the Wanda Metropolitano. While the game itself may have been a dull affair for the neutrals, it meant everything for Liverpool and Origi’s late, composed strike with his weaker left-foot was perfectly placed into the bottom-right corner, sending the Liverpool fans behind the goal into pandemonium.