Football
News
The France midfielder's admission led many to allege he shouldn't be depressed due to his money and fame. Such attitudes are harmful.
Joey Mills
15:00, 23 Mar 2022

“I have been through it, but we don’t talk about it. Sometimes you don’t even know you have depression, you just want to be isolated, to be all alone, these are the unmistakable signs. From a personal perspective, that started when I was with José Mourinho at Manchester. You ask yourself if there is something wrong with you, because you have never experienced these moments in your life.”

Manchester United midfielder Paul Pogba’s admission that he has suffered from depression during his Old Trafford spell met with the expected online response. The tired GIF of the man dabbing tears from his eyes with a wad of money. The player avatar accounts opining that this is what playing for “Penchester Penited” does to a player. The misguided attempts to link a player’s declining mental health with the sporting malaise that has set in at United post-Ferguson. At best, the vast majority of responses showed a complete lack of understanding that depression is a disease rather than a consciously-chosen mood. At worst, they showed the sort of callous refusal to acknowledge that footballers are human that can lead a player down the path to mental illness.

Whatever your analysis of Pogba and his contributions to United, it is beyond the pale to say he deserves this. It is also ignorant to suggest the fact he is a wealthy man should be enough to insulate him from such feelings. You can’t pay clinical depression to leave you alone. There is also an argument to be made that the treatment Pogba receives, the same treatment that has led to a raft of unsympathetic and cold responses to his plight, is a contributing factor to how he felt at that point.

Pogba backed himself as a youngster, rejecting a contract offer to remain at a Manchester United team that had won four of the last six Premier League titles. Instead, the young midfielder sought first-team football at Juventus. When he returned four years later, having played a role in four Serie A triumphs in Turin, he found the Red Devils to be a very different club from the one he’d left. The Ferguson years were still recent enough that United’s decline remained surprising and seventh, fourth and fifth-placed finishes in the three seasons since the Scotsman’s departure were unacceptable. Proven winner Jose Mourinho was installed as manager, and Pogba’s return, for a then-world record £89 million fee, was supposed to be the catalyst for a return to glory.

The early signs suggested that this new era at Old Trafford could bear fruit. United finished sixth in another wretched Premier League showing, but ended the season with the Community Shield, League Cup and Europa League in the trophy cabinet. It was a success that neither Pogba, Mourinho nor United would ever truly kick-on from. United finished second the following year but were a mammoth 19 points behind title-winning Manchester City. They also lost the FA Cup final to Chelsea, and the season was marred by a public bust-up between the French midfielder and his manager. It is this period that Pogba earmarks as the genesis of his depressive thoughts. 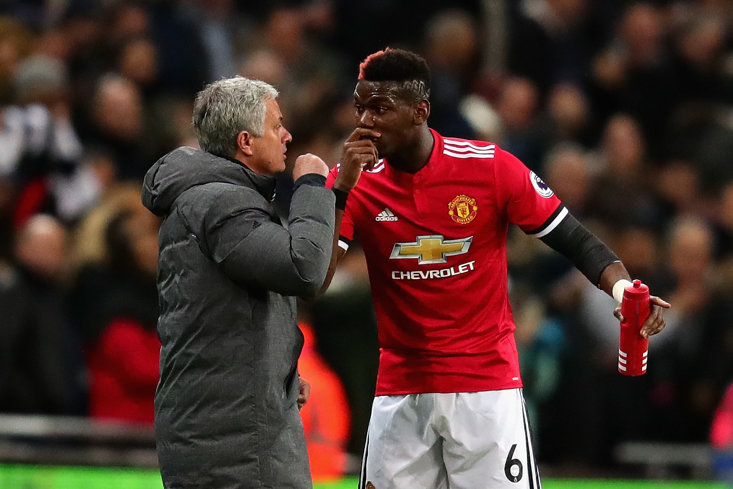 Being bought for a record fee opened Pogba up to an increased level of scrutiny that he had not experienced before. As he defied expectations, and allegations of a lack of professionalism from Sir Alex Ferguson, to become a first-teamer at Juventus he did so as a free transfer. The France international became indispensable at Juventus without the looming ghost of costly failure. At United, his consistency and influence was questioned. As the debate raged on how best to positionally accommodate his unorthodox selection of skills, pundits began to criticise the player in larger numbers. This is not to make the point that any player is beyond reproach, simply that the sustained and targeted criticism Pogba accrued from some quarters was excessive. There is a reason a whole meme centres around one pundit in particular blaming the midfielder for all the world’s ills.

Even more unacceptable was the way such criticism seemed to follow Pogba off the pitch. For decades, players like George Best, Paul Gascoigne and Diego Maradona were lionised for their off-field excesses. Best was the most naturally-gifted player ever to pull on the red shirt of Manchester United, but I’d wager you have heard more tales of his drinking than of his effortless slaloms past helpless defenders. Pogba indulges in no such vices, but his happy-go-lucky demeanour, dancing and social media posts have all been used as sticks to beat him with. To re-emphasise an earlier point, footballers are human beings. The argument that a few seconds of dancing on Instagram is to blame for United’s woes on the pitch, a complaint levelled at Jesse Lingard and others as well as Pogba, is flimsy at best.

This article is not trying to make the point that Paul Pogba is a saint beyond any fair criticism. His performances for United have fluctuated between titanic and tiresome. The form he showed in helping his country win the World Cup is only rarely glimpsed from a seat in the Stretford End. The 29-year-old and his agent have also relentlessly undermined United, lifting their skirt to any passing super-club in a series of interviews that are brazen in their advances. In the very same interview Pogba made his mental health revelation, he also spoke of a desire to move to Paris Saint-Germain. At a time where his current employers are battling for fourth spot, Pogba called United’s season “dead”. These comments are unhelpful and to many fans unforgivable, but they do not mean Pogba is undeserving of sympathy.

Mental health is thankfully more of a talking point than ever, both in sport and in society. Still, there is a temptation from some quarters to see footballers as something artificial. To dehumanise them. Paul Pogba is not a comic book character, no matter how many items with his face on you can buy from the Manchester United Megastore. He’s a human being. Flawed? Yes. As are we all. But his mental health is important, and no amount of money, fame or footballing ability is justification enough to not take it seriously.