“I have never feared getting the sack, because if I did fear that then I couldn’t be my own man.”

Wayne Bennett is the most successful coach in rugby league history. A man of very few words, he is revered by his players, whilst keeping a safe distance from the many journalists who have tried and failed to get anywhere near him.

Bennett has always shunned the limelight and given the media the shortest shrift that he is permitted to do. I have only had the pleasure of interviewing him at length once, on his arrival in the UK to start his new job as England head coach in 2016. To fill the allocated ten-minute slot took some doing given the frosty nature of the opening exchanges, and much of the remainder was spent explaining how he prefers talking to the animals on his Queensland farm rather than reporters such as myself, because they listen attentively and don’t answer back.

For Bennett to give up an hour this week to discuss what makes him tick therefore was compelling, and also underlined the strength of his bond with the players he has coached – in this case his former captain, retired England skipper turned podcast host James Graham.

“I always coach for the present but I also have the long-term in my mind,” he says when asked to break down his stunning success. “Too often I see coaches fail not because they can’t coach but because they don’t have that vision.”

The 72-year old is enjoying a very rare sabbatical - the first break he has had from the game since 1983 - before taking charge of new NRL expansion club The Dolphins next year. His extraordinary career has so far yielded seven Grand Final wins out of ten, six Minor Premierships, and three Coach of the Year awards, on top of representative honours with Australia, Queensland, Great Britain and England.

Bennett has spent his time off recruiting for that inaugural Dolphins season whilst feeding cattle and looking after the horses on his farm where he will eventually retire.

“The moment comes and goes very quickly, so the long-term view is the key,” Bennett explains of what makes a successful coach.

“Have patience. A coach listening to this will say ‘well it’s alright for him’. No, it’s not alright for me, I had the same philosophy when I started coaching.

“I have never feared getting the sack. I’ve probably cheesed a few people off because of that attitude, I used to annoy my mother because of it. She told me on numerous occasions that I was so single-minded but that’s okay.

“The bottom line is that it is a job that you can’t listen to too many, you have to go with your gut feel. And you are the only one that is feeling that. You have to have that belief and confidence. If you get it wrong you will pay the price with your job, but it will be your price and you will be happy with that.”

Underneath the cold, hard exterior is a man who has never taken himself too seriously. And that is why his players love him. Every England player who played under Bennett during his four-year tenure as national coach will describe how he made them feel a desire to bleed for the shirt, because he believed in them, and would back them to the hilt. So long as a couple of very simple rules were adhered to.

“I’m happy to give players tough love” he says. “It’s not complex. If they don’t like it they can go somewhere else. I keep it pretty simple, but values are values and will never change.

“Don’t be late. And if I’m not talking to you it’s either because you’re off your game or playing perfect. And I’ve never seen a perfect player.

“I want you to be men. If I treat you like boys that is how you will behave. I put it back on you. If I have curfews and rules it will be human nature to break them, and if I minimise rules then players respect how they are being treated and don’t want to let the team down.

“They are simple things but they work because it makes you feel part of something.

That approach saw Bennett lead England to a rare World Cup final in 2017, closer to the holy grail than many believe the team is now ahead of the delayed 2021 competition that England hosts this autumn. Bennett’s contract was not renewed in 2020, with Shaun Wane taking over. There was no dwelling on what might have been, no licking of wounds. Bennett knows the cut and thrust of elite management as well as anyone. But how many actually know him? 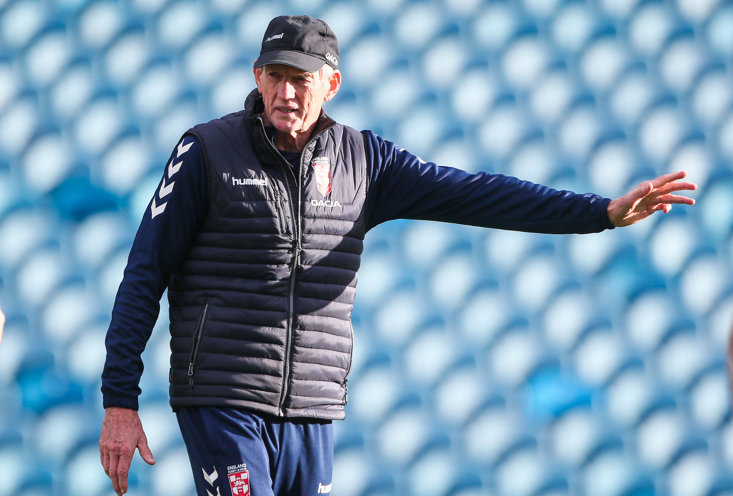 Hard-nosed but shy, strong-willed but economic with words. Who is Wayne Bennett?

“I’m an introvert, extremely so,” he says. Yet there are quirks to his character too. Bennett won’t sit in the quiet coach’s corner at the front of the team bus, he feels an important desire to be at the heart of the team, whether it goes against his own nature or not.

“For me to be up at the back of the bus is pretty hard. I’m happy to be in the corner. But I also like fun and being about rogues who are enjoying themselves. The front of the bus is all the bores, all the management, all the players that are closer to god than you and I.

“And they bore the shit out of me! You go down the back and all the idiots are down there, all the people that you don’t want to be but you love being in their company.”

Bennett’s secret to coaching success is action and trust over words and rules. And the key to that, he believes, is embracing the chaos.

“I’m still searching for the idiots, l love them, that’s where the fun is."