The debate on who is the greatest footballer of all time has been fierce in recent years with the performances of Lionel Messi and Cristiano Ronaldo thrusting two more candidates into the furnace.

However, there is always one name who pops up on the ‘greatest ever’ debate.

Pele. The great Brazilian. Three-time World Cup winner and scorer of over 1,200 goals. Deserved of his place at the top of football’s elite. Or is he? His goal scoring achievements seem incredible. 1,283 goals in 1363 games.

These incredible numbers seem also mythical and that’s because they are.  526 of these goals, that’s almost half, came in unofficial friendlies and tour games. He even counted games he played for the Sixth Coast Guard in the military competition.

He officially scored 757 goals in 812 games. Impressive nevertheless but in the Brazilian league which was and still is lacking in the quality that the European leagues possess, not mythical.

Pele once scored 8 goals in one game against Botafogo, again a stunning achievement but the team he was playing against were not the Brazilian giants from Rio. Instead it was a team with the same name from Sao Paulo, a team that currently play in the 4th tier of Brazilian football. A pub side compared to Pele’s Santos.

Supporters of Pele will argue that he transferred his club form onto the international stage, putting him a step ahead of the rest. His three World Cup wins and 77 goals in 92 games certainly have credentials, however he was playing up front for what has been considered the greatest team of all time, should he have scored more?

The World Cup wins are slightly exaggerated as well. Back then the greatest football competition on earth only included 16 teams. Half of what it is today. In 1958 Pele didn’t even play in the first two games, and Garrincha, still considered by many Brazilians as the greatest ever was phenomenal throughout the whole tournament. 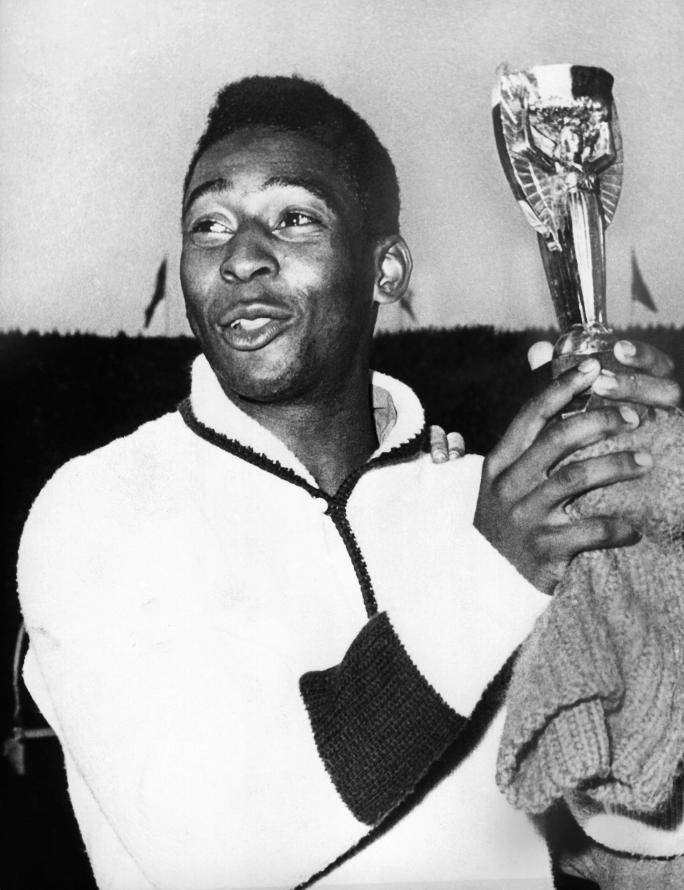 Three World Cups to his name

Pele scored six goals on his way to his first Jules Rimet win. Seems impressive until you realise the top scorer for that year was Just Fontaine who hit an outstanding 13 goals. More than double Pele’s tally.

That brings me onto another fact. Pele was outperformed in every single World Cup he played in. Not once did he win the golden boot. In 1962 he played one game, then got injured in the second and watched as the magical Garrincha took his side to glory, scoring a brace In the quarter and semi-finals.

They were that good they didn’t even need Pele to win the tournament comfortably.

Top scorer Eusebio and his Portugal side knocked Brazil out of the ‘66 tournament in the group stage but by the time the 1970 World Cup came around Brazil were arguably the greatest side ever.

Rivelinho and Jairzinho teamed up with Pele to provide one of the greatest tournament wins. Pele received most of the plaudits but did he win the golden boot? No. That honour went to Gerd Muller. Pele wasn’t even Brazil’s top scorer, Jairzinho got seven to Pele’s four. As a player who seemed to pride himself for his goal scoring prowess, he was always outscored in major tournaments.

Lionel Messi is sometimes criticised for not having proved himself in more than one league. There is a reason for that though as the Spanish league is the best in the world. He has also won the Champions League four times and is battling with Cristiano Ronaldo to be the top scorer ever in that tournament.

The same cannot be said for Pele. He never played at the highest level of the club game, or anywhere even close. He played 18 seasons for Santos and then moved to the retirement home that was the New York Cosmos. He was at his peak while the Busby Babes were mesmerising Europe and George Best, who Pele famously called the best ever, was terrorising defenders. Would Pele be able to compete with them as Eusebio did? The sad thing is we never got to find out.

The one thing Pele was able to do was always thrust himself into the spotlight. He had an innate ability to sell himself, he along with Best was one of the first real celebrities of the game. The story of a young boy promising to win his father the World Cup after a final defeat in 1950, and then going and leading his team to glory three times is a very saleable one.

The 17-year-old who won the World Cup in 1958 wanted to be a megastar. He went all round the world in the 60s, doing three week tours of Europe and played hundreds of exhibition matches against poor opposition, getting his name out there, scoring goals and allowing everyone to see his talent.

This led to it being the norm that Pele was the best in the world and by the time the 1970 World Cup came around everyone knew it. It was the first tournament to be shown on colour television and the whole world watched as Pele produced some of his best football, it was confirmation for the rest of the world that he was the greatest.

Everything lined up perfectly for Pele. The birth of television combined with the peak of the Brazilian national side. I’m not for one minute saying that Pele was not a good player. But let’s consider the facts of what he actually achieved before chucking him in to any ‘greatest ever’ debate.