Let’s get it out of the way early on. Pep Guardiola has spent an awful lot of money whilst in charge at Manchester City. True. But the genius has presided over the most successful period in the club’s history, lifting 10 trophies and winning every competition on offer in England having been at the Etihad for just five years.

During his time in England, the Catalan has left an undeniable mark on the game and on his 51st birthday, it’s time to celebrate the man who has reshaped the landscape of English football. Here’s just a few of the records he has broken since his arrival on these shores.

Winning football matches is the easiest barometer of success, and in both 2017-18, and 2018-19, Guardiola broke the record for the most Premier League matches won, as his team won 32 of the 38 matches in a season on their way to two consecutive titles.

The greatest Premier League season ever? Well certainly from a points perspective. In 2017-18, Man City's centurions went onto win 100 points thanks to Gabriel Jesus’ last minute goal away at Southampton on the final day - a total that is surely unlikely to be matched, given 114 is the maximum total available in one season.

That 2017-18 season was absolutely mental wasn’t it? 16 wins out of 19 on the road. Only Liverpool beat them, and Burnley and Crystal Palace held them to draws on this epic run to the title in Pep’s second season.

He may not have the trophies that Sir Alex Ferguson does, but by pure win percentage of managers that have managed at least 50 Premier League matches, Pep is in a league of his own. 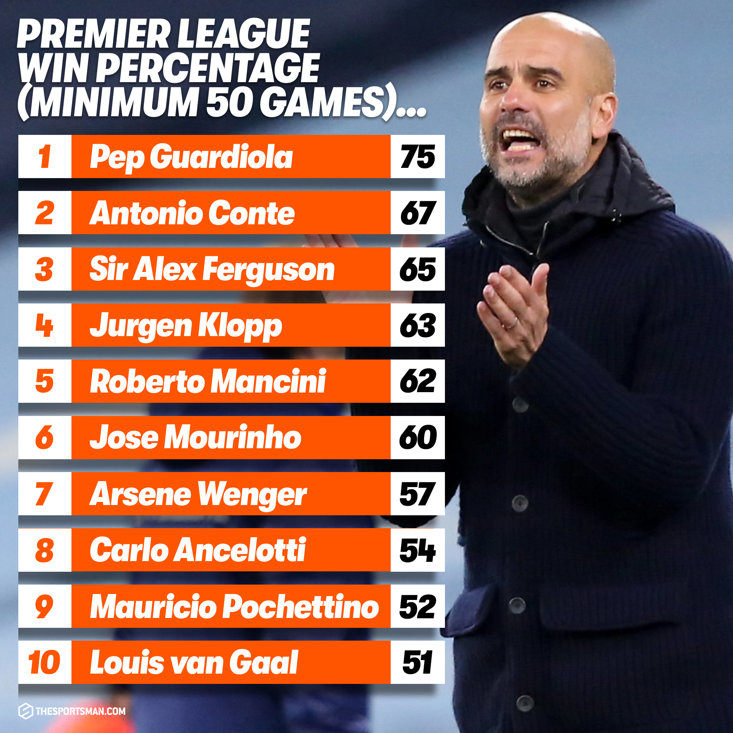 The first half of the 2017-18 season was something to behold as City drew their second game of the season against Everton in August, then drew again on New Year’s Eve to Crystal Palace. Between those two results there were 18 consecutive wins. 18! However, this is a record they have come close to breaking.

Last season, they came from nowhere to romp to the title over the winter months as they strung together 15 league wins in a row and it looks as if they could do the same this campaign, as they are currently on a run of 12 consecutive victories, which has almost certainly secured them a fourth league title in five seasons.

239 - Most wins as Manchester City manager

This illustrious club has never had a more successful manager. Guardiola has won 239 of his 326 matches in charge which puts him above the legendary Les McDowall and Wilf Wild in the club’s standing.

12 - Most consecutive away wins

Finally a stat that didn’t come from 17-18! This run went from the 19 December 2020 all the way until 14 May 2021 where they were surprisingly beaten by Brighton, although the title was already in the bag and they had a Champions League final in their sights. Their current run stands at six.

Pep’s attacking football has been absolutely glorious at times over the last five years, but his attacking plan came to its ideal fruition in that 17-18 season where Man City somehow scored 106 goals in 38 league games. That is 2.7 goals per game. Nuts. This season they are averaging 2.45 goals per game.

+79 - Best goal difference in a season

See above. Scoring lots of goals makes for an outstanding football team. We’ve had the Invincibles, Jose Mourinho’s Chelsea’s defensive genius and Fergie’s Manchester United - but no side has dominated the Premier League like Pep Guardiola’s Manchester City in 17-18.

9 - Most wins in a single month

In January 2021, Pep set a new record, not just in the Premier League, but in the history of the Football League that dates back to 1888. His City side won nine matches in all competitions in a single month, the most any side has won in a calendar month since records began.