Former manager Mancini guided the Blues to a famous 2011 FA Cup title, the club’s first for 42 years and ahead of today’s mouth-watering quarter-final clash with Southampton at St. Mary’s, Guardiola paid a glowing tribute to one of his predecessors, especially for the way we he laid a platform for unprecedented success at the club.

“I think Roberto, with his players, was so important for the club to start to win trophies,” stressed the Spaniard.

“The FA Cup and especially for winning the Premier League – and that final moment for Sergio [Aguero].

“You have strategies and ideas, but you need trophies at the end of the day. Otherwise ideas, without trophies, well you cannot compete.

“Here we carry that through. How good is Manchester City? It’s because we win my friends.

“You have to sustain [success], we have to win. It’s the only thing that matters in football.

“You have to try and convince the players it’s the best way - to win games. This is important.

“Winning breeds confidence, it feels so good. You’ve done it, so you feel that you can do it again. Winning trophies does that.”

Guardiola has won a staggering TEN trophies since taking charge of City in 2016, but perhaps surprisingly he was only won one FA Cup during his sparkling tenure.

But that FA Cup crown was certainly worth the wait. City blitzed Watford 6-0 at Wembley to follow-up Mancini’s trophy-success eight years earlier.

“For a long time we didn’t do that, but the first step, well I give huge credit,” reflected Guardiola, who side are still eyeing a memorable treble this season as they continue to also challenge for silverware in the Premier League and Champions League. 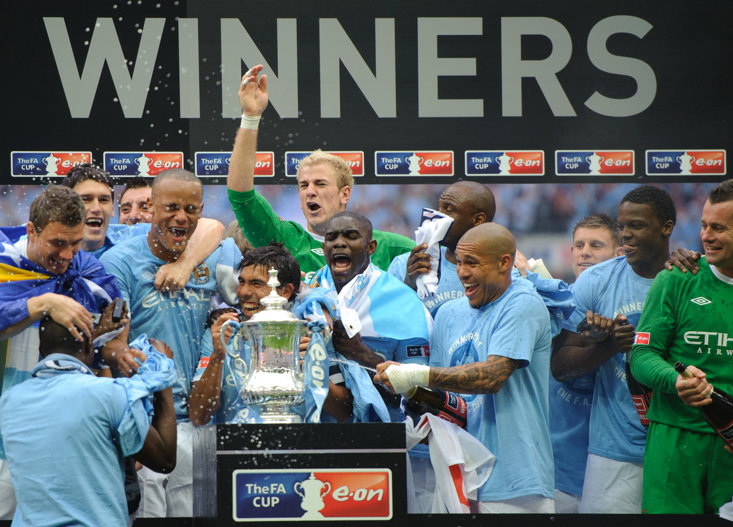 “If you can break that first step, like Roberto has done, well wow! He deserves huge credit, maybe we not be here without that?

“Maybe we might not have had the investment and recruited good players. They have helped us get to where we are now.

“I never forget the past. Never ever!

“All the previous managers and sporting directors that have been here before have helped us build.

“In terms of mentality, in terms of belief and for all of us at the club, it showed that we can do it.

“The more you win the more easier it becomes.”

City have drawn twice with the Saints in the league this season and came unstuck at St. Mary’s two years ago when the suffered a shock 1-0 loss in the Premier League - so Guardiola is only too aware of their opponent’s “quality”.

“They are good,” stressed Pep. “They are one of the intense teams, every time they play.

“They have quality with their manager and players, Southampton is team like a show from outside.

“They are consistent and have fantastic players.

“Listen, it’s not like if we win against Manchester United and then lose against Everton, well it’s a disaster.

“And where we draw against Crystal Palace [0-0 on Monday], it’s ‘we’re a disaster’. It’s not one thing or the other.

“We were good against Crystal Palace, but they defended really well, so if Southampton take a result against us it’s because they are good.

“But I respect our opponents who can defend for 90 minutes, they deserve huge credit.

“I don’t judge other results, but when you watch the last few seasons, you see our opponents are good. It should be like this.”