Football
News
The World Cup finalists were on the verge of likely elimination until Perisic struck
Conor Keane
18:56, 18 Jun 2021

A second-half strike from Ivan Perišić was able to spare Croatia’s blushes as they rescued a 1-1 draw against the Czech Republic to give themselves a Euro 2020 lifeline.

During an impotent first half which bore many similarities to their performance against England on Sunday, Croatia looked a shadow of the side that reached the World Cup final three years ago. There was a lack of assertiveness on the ball compared to that evidenced in Russia, and the loss of Mario Mandžukić to international retirement seemed to still be weighing heavily on them, with no figure in their current squad to act as the focal point in breaking through the thirds.  The burden of Mandzukic's workload has been left to Ante Rebić and Andrej Kramarić, but neither player have stood up to the challenge in either of Croatia’s two opening fixtures.

Mandžukić’s height and strength was crucial in tying everything together for Croatia, and his side have looked lost without him when they look to break into the final third. Their current leaders like Luka Modrić and Perišić have the quality to deliver but they have only mustered one real moment of quality between them. That moment, though, was a mix of quick reactions and a display of confidence to drive into the box, with a clinical finish from Perisic finishing the job. Apart from the goal, Croatia had some neat passages of play in the final third but they did not look likely to score again because they were lacking that focal point to allow them to play higher up the pitch. 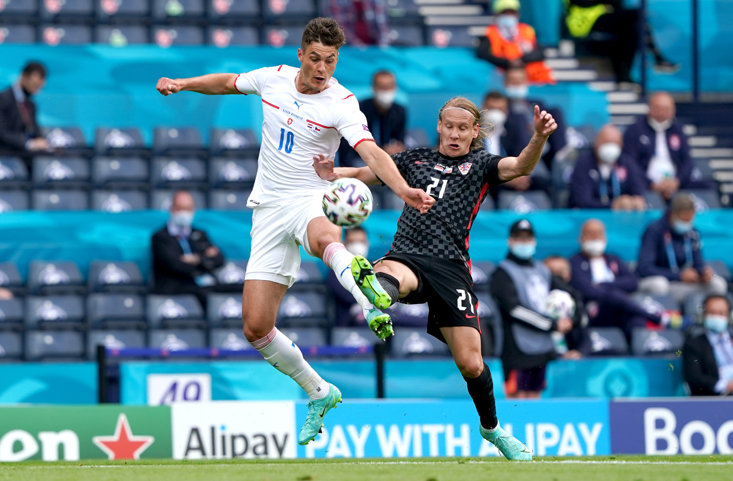 It could be argued that they have become a victim of their recent success and the pressure to go far this tournament has got to them, but with the quality that this side possesses they should be performing to the high standards that they have set themselves in the last few years. Even if they reach the knockout stage, they will really struggle against the better teams because they do not have the tempo or the quality to break sides with better defences down.

The Czech Republic were quick out of the blocks and were applying a lot of pressure in the opening stages. Patrik Schick had a great chance to open the scoring and claim his third goal of the finals after a great pass in from the right by Vladimír Coufal, but he got the ball caught under his feet and he could not find the back of the net. Croatia produced a good opportunity to take the lead from a well-worked corner but Perišić’s effort from the edge of the penalty area was comfortably gathered by Tomáš Vaclík.

Schick opened the scoring on 37 minutes when he stepped up to convert a controversial penalty after he had been caught in the air by Dejan Lovren's elbow in what appeared to be a fair challenge for the ball. The referee initially allowed play to continue, but after witnessing Schick's bloodied face and checking with the pitchside VAR monitor, the spot-kick was awarded.

Rebić could have pulled Croatia level moments later, but his scuffed effort flew wide of the post. Perišić scored the equaliser in the early stages of the second half after a quick set-piece fed him in down the left and he worked his way into the box and fired his shot into the top-right corner of the goal.

But this Croatia side rarely looked likely to get a second, and while the point keeps them in the picture for progression from Group D, another trip to a final seems highly unlikely at this point.