After an entertaining eight days in the Betfred World Matchplay darts, the finalists have been decided and the reigning champion Dimitri Van den Bergh will face Peter Wright at Winter Gardens.

Saturday night brought some thrilling and extraordinary darts in Blackpool and it has laid the foundations for what is promising to be an epic final on Sunday. Here is how it unfolded.

The reigning champion showed his quality once again in this tournament as he was the first player to book his place in this year’s final. He battled hard after an early setback in which his opponent capitalised on, but Ratajski had chances to extend his lead but fell short. ‘The Polish Eagle’ had an amazing opportunity with two darts at tops to prolong the match after he had let his early lead slip.

Van den Bergh showed his quality as the contest went on and his skill on the outer ring was extraordinary. He won eight straight legs to take a 10-6 lead and the Belgian completely dazzled with his darts and once again proved that this is his arena. He sealed the game with a double five at the finish with a 98 average and he threw an impressive eight 180s.

Peter Wright got off to a flyer by going 4-1 up at the start, hitting three 180s in the first three legs. However, as you would expect from Michael van Gerwen, the match was never going to be a breeze. ‘Snakebite’ did brilliantly to keep extending his cushion from the Dutchman and he played some exceptional darts to take a 10-5 lead at one point.

Seeing the final slip away from him, van Gerwen rallied and won four legs on the spin to make the score 10-8, but Wright was unwilling to give up his lead which he extended through a double eight for a 14-dart finish. The Scot was unable to keep van Gerwen frustrated and the Dutchman fought back to win two legs on the bounce before Wright re-established his three-leg lead. 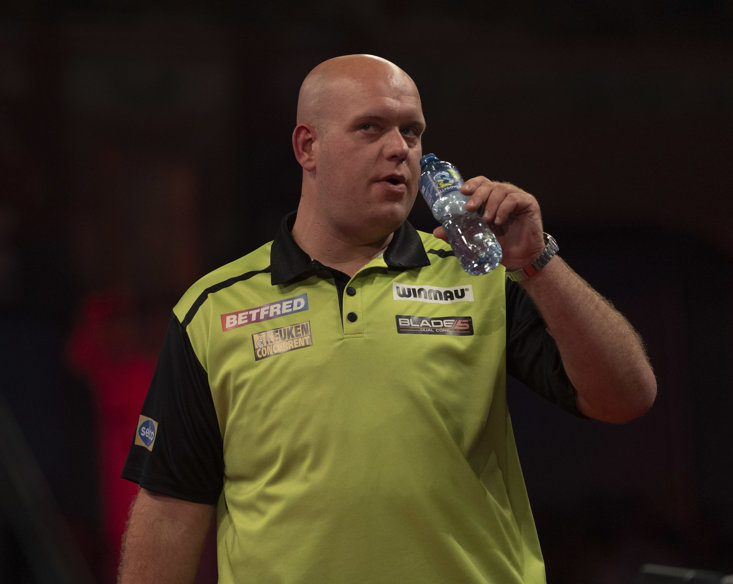 Snakebite let out a huge roar when he extended his lead to four, and for good reason. He produced a sublime 121 kill on the bullseye for a brilliant 12-dart break of throw. It was looking more likely he was going to meet Van den Bergh in the final. He quickly added his 15th and 16th legs with a 15-darter and a 14-dart break respectively.

With the momentum with him he sealed his place in Sunday’s showpiece after what was one of the most impressive performances in World Matchplay history. He posted a 110 average, the sixth highest in the tournament’s history.

The Scot broke down in tears as he confirmed his place in the final for the first time since 2017 and he will be confident he can go that one step further against Van Den Bergh on Sunday. What a night of arrows.