Josh Warrington became a two-time IBF featherweight champion on Saturday night with a bruising stoppage win over Kiko Martinez. ‘The Leeds Warrior’ is the latest in a long line of excellent British boxers in the 126lb division, along with WBA champion and potential future foe Leigh Wood. To honour Warrington’s victory in Leeds, here is a look at some of the other fantastic featherweights this island has produced.

No list of Britain’s greatest featherweights, or indeed of Britain’s greatest boxers, would be complete without the ‘Prince’. A cultural phenomenon as much as he was a prizefighter, the dancing, diminutive but destructive Hamed made a remarkable 15 consecutive title defences in a glittering career.

Unfairly remembered for the beating he received from Marco Antonio Barrera in his penultimate fight, it is too often forgotten what a sight to behold the Sheffield star was. ‘Prince’ Naseem dominated the division on both sides of the Atlantic through the latter half of the nineties. Great Brits Steve Robinson and Paul Ingle fell at his gloves, as did international names like Manuel Medina, Cesar Soto and Tom Johnson.

Hamed’s crowning glory came in his first fight Stateside, when he survived multiple knockdowns to stop New Yorker Kevin Kelley at Madison Square Garden. One of the greatest featherweight fights ever, Naseem knocked out the American in the fourth round. It was a star-making display that made him as big a name in the States as he already was in the UK.

The troubled Scotsman has battled alcohol and legal issues outside the ring, but inside it he was dynamite. The Glasgow man lifted the British and Commonwealth championships before pursuing world honours. Harrison beat Julio Pablo Chacon at his home base of the Braehead Arena in 2002 to claim the WBO championship.

After a successful defence over former world champion Wayne McCullough, Harrison lost his belt to the great Mexican Manuel Medina. Harrison would avenge that split decision loss by stopping Medina in the 11th round of a rematch.

Harrison would make six defences of his title, including a brutal knockout of Michael Brodie in a Scotland vs England affair. Tragically, at the peak of his powers, Harrison’s issues with alcohol and depression got the best of him. The proud Scot checked into the Priory clinic, and when he returned he vacated his title ahead of a defence against Nicky Cook due to problems making the weight.

Harrison fought lengthy legal battles to have his boxing licence reinstated, and eventually launched a comeback in 2012, seven years after his last fight. Harrison won two on the bounce before a points loss to future world title challenger Liam Walsh. Harrison won an unsanctioned behind-closed-doors bout in 2020, and officially retired earlier this month when his opponent in another scheduled comeback pulled out. 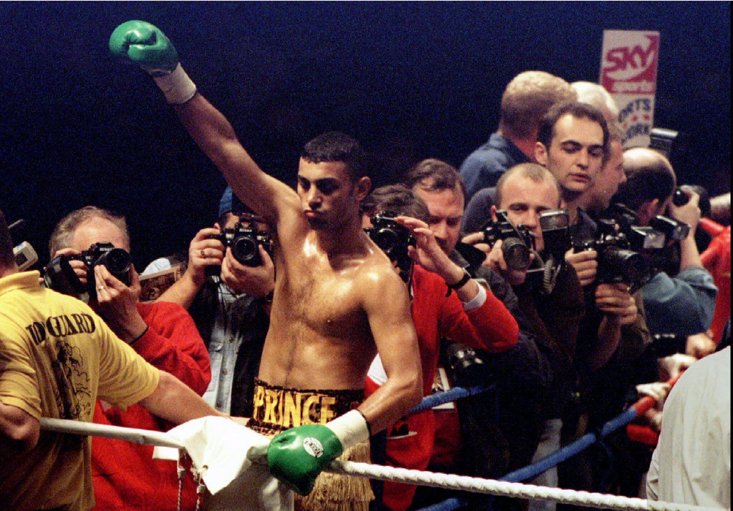 all rise for the prince: there will never be another naseem hamed

A truly inspirational figure, Steve Robinson came in at just 48 hours notice to fight John Davision for the vacant WBO featherweight title. The Welshman’s record was 13-9-1 going into the fight, but he shocked the world and won a deserved split decision.

The galvanising effect that wearing the title belt had on Robinson was utterly incredible. ‘The Cinderella Man’ made seven successful defences of his world title, beating quality operators like Colin McMillan and former champions Duke McKenzie and Paul Hodkinson. The National Ice Rink in Cardiff became a fortress, as Robinson took on all comers from Britain and abroad.

He could not stand in the way of greatness though. On a blockbuster night at Cardiff Arms Park, a precocious youngster by the name of Naseem Hamed stopped him in eight rounds to take his hard-won title. This was not the end of the story for Robinson though. The ultimate underdog was a world-ranked featherweight for most of the remainder of the decade, and he added the European title to his mantle with a win over Manuel Calvo in 1999.

It’s often difficult to gauge a fighter’s legacy when they are still active. It is particularly difficult to truly appreciate that fighter’s achievements when they are coming off recent losses. While his former foe Josh Warrington celebrated in Leeds, ‘Lightning’ Lee was getting stopped in five rounds in Argentina by the fearsome Gustvao Daniel Lemos.

That 2018 loss to Josh Warrington seems to be where the rot set in for the Welshman, as he had his IBF title ripped from his grasp. But what Selby did during his championship reign warrants inclusion here.

Selby was dazzling in taking Evgeny Gradovich’s title via technical decision in 2015. He rattled off four defences of his title, including a victory over the great ‘Cochulito’ Fernando Montiel. Selby’s slick ring style and element of arrogance made it feel like he would reign for a long time. But a fight at Elland Road against Warrington would be a tough ask for anyone. Selby lost that one via split decision before moving up to lightweight.

In 2020 he dropped a close, disputed decision to George Kambosos Jr. That result looks better in hindsight, considering the Australian went on to become unified lightweight champion. Still, Selby’s weekend sojourn to South America puts him in a difficult position. Any further losses could see the former champion become a name used to pad the records of more upwardly mobile fighters.