Football
News
The points were shared after a breathless encounter at Anfield
Simon Lillicrap
18:48, 03 Oct 2021

Liverpool’s 2-2 draw with Manchester City at Anfield was the match we had all hoped for. After a goalless first 45, the second half produced relentless goalmouth action, one wondergoal and two sides giving absolutely everything to secure all three points in the title race.

Mo Salah, who set up Liverpool’s opener and scored one of the goals of the season to put the home side 2-1 up, looked as though he had done enough to win the match, but in Phil Foden, City have a superstar of their own. They still may not have a natural striker, the young Englishman’s return to the side for their most important week has seen them take four points from away games at Stamford Bridge and Anfield.

Having scored at Anfield last term, he was the man that equalised when the tide had turned against his side. He silenced the vocal Liverpool crowd with a precise yet powerful left-footed finish into the bottom corner, but perhaps what was more impressive was his mannerisms when his side were behind.

In such a crucial encounter, with Liverpool one goal up and well on top in the second half, he was the player telling his teammates to calm down when they were wasting possession too easily. He was the one who they could trust on the ball under intense pressure and he was the one that produced in the big moments. It’s remarkable to think he is just 21 years old.

Gary Neville’s unique awarding of two man of the match awards, one to Salah and one to Foden, summed up the match that was served up on this Sunday afternoon. For all of the positives City produced, especially in the first half, Salah showed just how good he truly is.

At the start of the second period, Salah got a chance to run at Joao Cancelo and he left the Portuguese man for dead for the first time before driving at the centre-backs. Then Sadio Mane, who had been attempting to isolate Ruben Dias the entire match made a run from the left-wing and outpaced his marker, before sliding past Ederson. It was a Liverpool goal we have seen so many times before, but this one felt hugely significant in the title race.

As Anfield roared, City showed their mettle. Amid a hostile atmosphere, Gabriel Jesus ran with the ball past a couple of markers and then fed the ball into Foden who continued his scoring form at Anfield with another low finish. When they were tested, they managed to come back fighting, and they were led by their young English superstar. 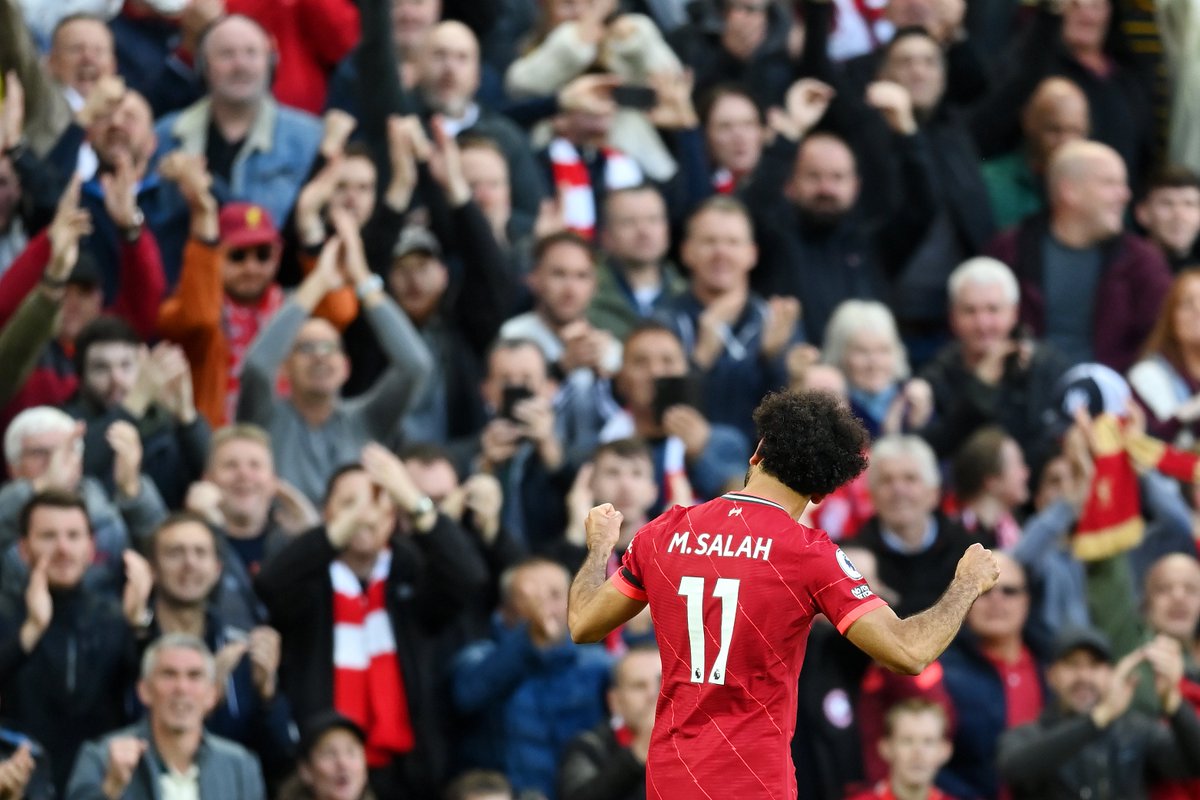 City can also feel aggrieved that Liverpool weren’t reduced to ten men after the already booked James Milner made a clunky challenge on Bernardo Silva that left Pep Guardiola absolutely furious. It was a clear second yellow yet for some reason Paul Tierney didn’t give it.

Then, Salah then scored one of the goals of the season. Surrounded by City defenders, he jinked his way into the box before firing the ball past a helpless Ederson. In a game stacked full of elite players, this moment showed that the Egyptian is on another level in the Premier League and will play a key role in Liverpool’s title charge this season.

However, when Liverpool had their tails up yet again, City refused to lie down. With Foden causing chaos on the left, they kept pushing forward until the ball fell for Kevin De Bruyne, who fired the ball into the net with the help of a Joel Matip deflection. 2-2. Parity.

But Liverpool had the major opportunity to win the game as a free-kick was flapped at by Ederson and fell to Fabinho in the box. With the goal at his mercy, his shot was miraculously blocked by Rodri, who saved City a point with an unbelievable piece of defending.

It was an extraordinary second half of football that saw the points shared at Anfield. City will probably go away happier given Salah’s display and the week they have had, with the knowledge that the man who could drag them to the title is back fit and firing.

Manchester City are 10/11 to win the Premier League