Us Sports
News
On this day in 2002, Jackson completed a three-peat for the third time in his glorious coaching career
Kris Voakes
07:10, 12 Jun 2022

You hear Chicago Bulls, you think Michael Jordan. You hear Los Angeles Lakers, you think Kobe Bryant. But there was one person who was with both men every step of the way as they racked up title after title. More than that, Phil Jackson made it happen for them.

He might have been furnished with some of the greatest players ever to step on a basketball court, with Jordan and Bryant chief among them, but the legendary coach was the key to uniting some of the greatest characters sport has ever known. And he did it over and over again, until he had made the kind of history that will never be repeated.

·  Appreciating the genius of Chuck Daly

·  The crazy times of Kareem Abdul-Jabbar

The 2000 Championship win was LA’s first in 12 years, but by the time they secured the three-peat on this day 20 years ago the likes of Bryant and Shaquille O’Neal had been assured of superstar status.

The fact that he would go on to top the Boston Celtics’ coaching great Red Auerbach’s achievement of nine wins with two more in 2009 and 2010 with the Lakers simply put the argument to bed. In taking two different clubs to such dominance, he had proved himself to be the greatest ever basketball coach.

But it’s not just that he achieved an unprecedented 11 titles as a coach, it’s in how he did it too. He brought together seemingly dominating personalities to deliver a tactical philosophy. While his Bulls predecessor Doug Collins had set up a team to play for Jordan, Jackson knew that they had to be far more than that. 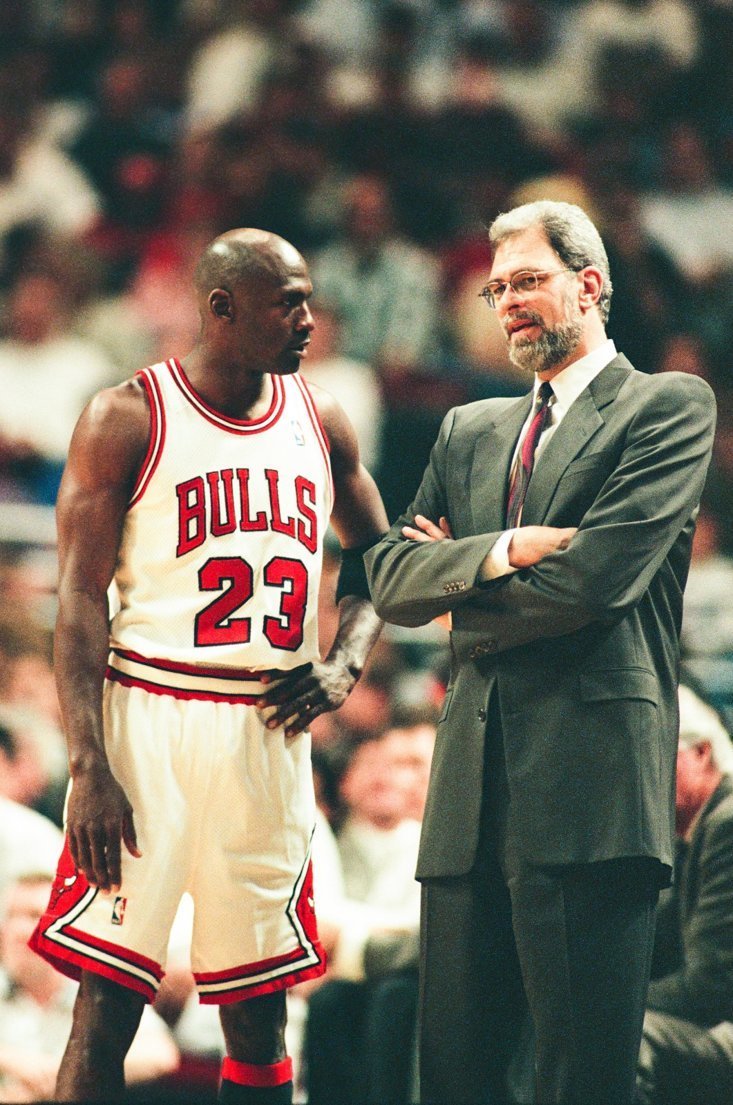 “I wasn’t a Phil Jackson fan when he first came in because he was coming in to take the ball out of my hands. Doug put the ball in my hands,” Jordan told the 2020 documentary ‘The Last Dance’. “He said ‘I’m not worried about you, but we’ve got to find a way to make everyone else better. We’ve got to create other threats.”

And that’s exactly what he achieved. He switched Scottie Pippen from point guard to small forward, releasing him as an attacking threat. He also managed to harness Dennis Rodman’s incredible personality and give the entire team a belief in themselves rather than just in the guy wearing 23.

“He didn’t look at me as a basketball player, he looked at me as a great friend,” Rodman told The Last Dance. “He realised that I probably needed him for inspiration. He wanted to see me persevere.”

Point guard Steve Kerr, now a multiple-Championship winning coach with the Golden State Warriors, added: “I had never met a coach who was that different and genuine when it came to bringing the group together.”

What followed was a legendary spell, but it was destined not to last forever thanks to disagreements going on in the background with general manager Jerry Krause.

“Looking back, I think my struggle with Jerry taught me things about myself that I couldn’t have learned any other way,” Jackson reflected in his 2013 autobiography ‘Eleven Rings’. “The Dalai Lama calls it ‘the enemy’s gift’. From a Buddhist perspective, battling with enemies can help you develop greater compassion for and tolerance of others.

“I wouldn’t exactly call Jerry my ‘enemy’. But our conflict certainly tested my inner strength. Though Jerry and I agreed on most basketball-related issues, we had opposing views on how to manage people.”

Having shown he knew exactly how to get the best out of people in winning six NBA titles in Chicago, Jackson was soon building another dynasty on the west coast.

“Everywhere the Lakers went – not just the superstars but the other players as well – they were greeted as heroes and offered endless, often lucrative, opportunities to bask in their wonderfulness,” he said of what he found in Los Angeles.

“My intention was to offer them a safe, supportive refuge from all that craziness and put them in touch with their deep – but as yet undeveloped – longing for real connection. That was the essential first step on which the team’s future success would depend.” 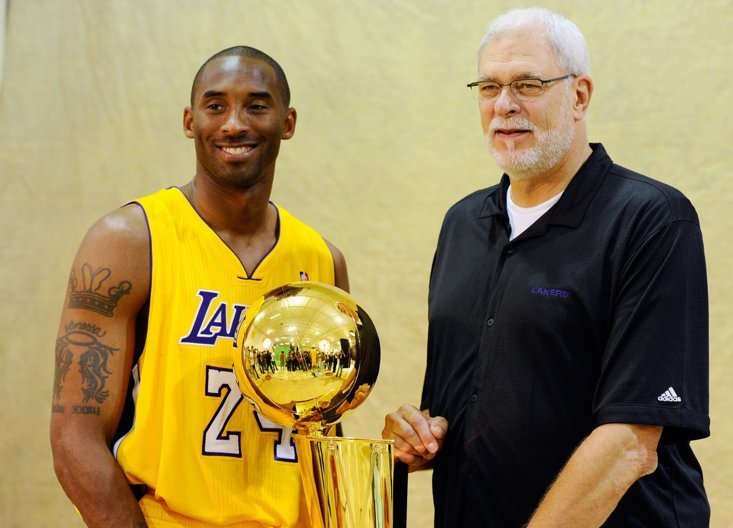 In 1999-2000, the Lakers finished 67-15 in their first regular season under Jackson, going on to beat the Indiana Pacers in the NBA Championship. They then beat the Philadelphia 76ers 4-1 in 2001, and swept the New Jersey Nets the following year.

Against the Nets, the twin pillars of O’Neal and Bryant had again dominated the stats but, just as it had happened in Chicago, Jackson had made it happen by making the most of the supporting cast.

This was a genius of a leader, ensuring that some of sport’s greatest ever names got the hardware that their brilliance deserved. Jordan, Bryant, whoever. Everyone around those most sensational of basketball clubs had Phil Jackson to thank for becoming as good as they possibly could be.

x
Suggested Searches:
The Sportsman
Manchester United
Liverpool
Manchester City
Premier League
More
us-sports
NBA Draft 2022: The Orlando Magic Select Paolo Banchero As First...
The Orlando Magic selected Paolo Banchero as the first pick in the 2022 NBA Draft on Thursday at the [ ... ]
us-sports
The Grap Wrap: Vince McMahon Embroiled In 'Hush Money' Scandal
It’s been a bumper week of wrestling news, with the more controversial side of the squared circle [ ... ]
us-sports
The Grap Wrap: Bray Wyatt To Return? MJF's Flight Drama And...
Good morning grapple fans, and welcome to a new semi-regular professional wrestling column from The [ ... ]
us-sports
Colin Kaepernick, The NFL Star Rather Than Activist, Might Be...
Google Colin Kaepernick. There he is, the ‘American activist’. Check out Wikipedia. Oh yes, [ ... ]
us-sports
On This Day 20 Years Ago, The British Bulldog Davey Boy Smith...
On 18th May 2002, ‘British Bulldog’ Davey Boy Smith passed away from a heart attack at the [ ... ]
us-sports
NBA Playoffs Resume After Chaotic Exits For Champion Bucks And...
It’s been a tremendous few days in the NBA and this week’s conference finals, which start [ ... ]
us-sports
Ric Flair Returns At 73: The Nature Boy Will Walk That Aisle...
“To be the man, you gotta beat the man!” ‘Nature Boy’ Ric Flair has uttered [ ... ]
us-sports
There Are Storylines Everywhere You Look In The NFL's Week 1...
Something the NFL seem to be willing to do is make their sport a spectacle through their own power. [ ... ]
us-sports
Chuck Daly: 'Daddy Rich' Tamed Rodman, Bagged Isiah His Rings...
Entering a debate on the greatest sports sides in history should inevitably reach a particular conclusion. Avoiding [ ... ]
us-sports
'We Want RK-Bro! We Want The Usos!': No One Is Safe From Sasha...
When WWE Women’s Tag Team champions Sasha Banks and Naomi first joined WWE, the landscape was [ ... ]
us-sports
Everything You Need To Know About WWE WrestleMania Backlash
The wait ends this weekend, as WWE returns with their first Premium Live Event since WrestleMania. This [ ... ]
us-sports
The Crazy Times Of Kareem Abdul-Jabbar, The NBA All-Star Who...
This article first appeared in The Sportsman on 05/05/20 Being the number one draft pick in the NBA [ ... ]
us-sports
Blood Brothers: Randy Orton And Riddle Talk Chemistry, Growing...
The old adage dictates that opposites attract, and on the face of it that certainly seems true of RK-Bro. [ ... ]
us-sports
The NFL’s Best Trades and Free Agency Signings So Far
It’s the same every year. Almost as soon as the Vince Lombardi Trophy is awarded, attention turns [ ... ]
us-sports
Impact Wrestling's D'Lo Brown: We Didn't Open The Forbidden...
It is such an overused phrase that it has become cliched, but Impact Wrestling’s D’Lo Brown [ ... ]
us-sports
How ‘The Last Dance’ Brought Michael Jordan's Chicago Bulls...
It's now been 26 years since the Chicago Bulls ended the NBA season with a record of 72 wins and [ ... ]
us-sports
On This Day In 2018: WWE Icon Bruno Sammartino Passes Away
There have been 30 WWE Championship reigns in the last 2,803 days. In the 2,803 days between 17th May [ ... ]
us-sports
Why Jackie Robinson Day Means As Much Today As It Ever Has
Across Major League Baseball on Friday, number 42 will pitch to number 42. Number 42 will field the [ ... ]
us-sports
Frank Vogel Out: Who’s Next In The Hot Seat For The LA Lakers?
Head Coach Frank Vogel has paid the price for the Los Angeles Lakers’ poor campaign, as they failed [ ... ]
us-sports
British Invasion: WWE Announces Its First UK Stadium Show In...
WWE will host their first UK stadium show in 30 years this summer, with the American sports entertainment [ ... ]
us-sports
Giannis, Embiid Or Jokic: The Wide Open Race To NBA Most Valuable...
The race to become the NBA’s regular season MVP has never been tighter. Giannis Antetoukoumpo [ ... ]
us-sports
One Champ To Rule Them All: Lesnar Takes On Reigns On WrestleMania...
We are halfway through WrestleMania weekend, and now that you’ve finally processed what happened [ ... ]
us-sports
WWE’s Combat Sport Crossovers Have Given Us WrestleMania Moments...
This weekend, two former UFC Champions will headline WWE’s most marquee of events, WrestleMania. [ ... ]
us-sports
Return of the Rattlesnake: Stone Cold Leads WrestleMania Saturday
WrestleMania 38 is almost here, as WWE prepares to stage its biggest shows of the year. Nowadays, the [ ... ]
us-sports
The Show of Shows: The Best Match From Every Single WrestleMania
WrestleMania weekend is upon us, as WWE prepares to stage the 38th edition of the biggest event in professional [ ... ]
us-sports
The Lion and The Hyena: 25 Years On From The Most Important...
“These people are standing, can you imagine the pain that is racing through Austin’s body? [ ... ]
us-sports
Stone Cold Steve Austin Accepts Kevin Owens' WWE WrestleMania...
“Whether you want to call this ‘The KO Show’, a match, a fight, a brawl. Whatever. [ ... ]
us-sports
30 Years Since LA Lakers Retired Magic Johnson's 32, His True...
During this week, back in 1992, the LA Lakers chose to retire the number 32 jersey worn by the [ ... ]
us-sports
Michael Jordan At 59: The Man Who Changed What It Meant To Be...
In the summer of 1998, Michael Jordan won his final NBA Championship with the Bulls. Six months later, [ ... ]
us-sports
Everything You Need To Know About WWE Elimination Chamber
WWE returns to Saudi Arabia this Saturday for Elimination Chamber. After a relationship between WWE [ ... ]