On July 12, 1979, a baseball game between the Chicago White Sox and Detroit Tigers ended with riot police fighting through crowds and an explosion which damaged the field and stands. What could have caused such an apocalyptic scene? Records - and disco records at that.

Forty-one years on, all this may sound like the ramblings of a dream diary after eating too much extra mature cheddar before bedtime. But it did happen and every year that passes makes the whole episode more ridiculous and incomprehensible.

It’s difficult to imagine disco inciting such extreme behaviour. In 1979, disco music was the dominant genre of the time. Two years earlier, the soundtrack to Saturday Night Fever became one of the biggest albums of all time - a celebration of all things disco led by the Bee Gees with a track listing which was the very definition of all killer, no filler. 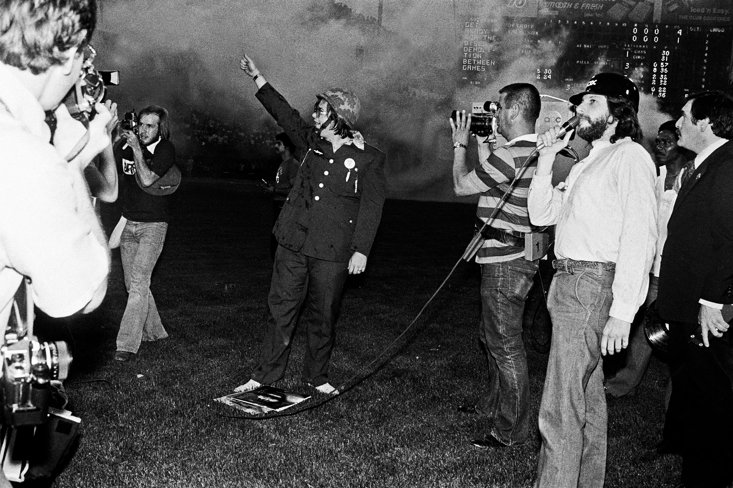 Fans of rock music hated disco and everything that went with it so much, that under the guidance of Chicago DJ Steve Dahl, they attended a White Sox game paying a bargain 99 cents to get in as long as they brought along a disco record which would be destroyed at the end of the night. Dahl’s previous radio station had changed its output policy from rock to disco to cash in on the genre’s popularity. We should also note here that he was sacked on Christmas Eve, 1978.

As part of his shows on a station called The Loop, he would encourage his listeners to attend anti-disco events some of which ended in chaos. What started off as a low-key protest with around 20,000 fans expected turned into a near sell-out with around 50,000 disco haters packing into the stadium and many more sneaking in. With ground staff overwhelmed by the number of visitors, many of the records went uncollected and were instead thrown like frisbees onto the playing field. The crowd chanted “disco sucks” as records reigned down from the stands.

Dahl revealed in his shock-jock persona. He arrived in the stadium on the back of a convertible jeep dressed like an army general. He blew up an overflowing box of records causing a pitch invasion and a fire which caused damage to the stadium. He had previously stated that he wanted to blow up a stack of discs at a shopping mall but the White Sox’s front office promoter Mike Veeck (the son of White Sox owner Bill), having heard about the plan and worried about a low crowd for a nothing game against the Tigers, persuaded him to hold the demo at their home, Comiskey Park.

As the box of vinyl was blown up, it tore a huge hole in the outfield grass. The batting cage was destroyed as riot police arrived and there were 39 arrests as the crowd tried to break into changing rooms.

Broadcasting a day later, Dahl made fun of the coverage the event received, downplaying the event saying “some got wild which you shouldn’t have done… I think for the most part everything was wonderful”. 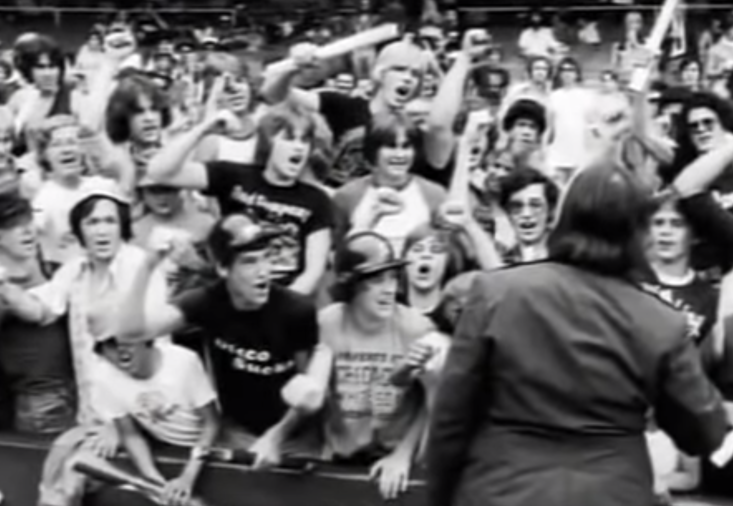 At the height of this “war” on disco, some media coverage argued that the music promoted gay culture and lifestyle while others played on the perception that rock music - and its link to white male masculinity - was dying. The majority of disco music was made by black and gay artists and the idea of destroying it was branded “shameful” by critics.

Rolling Stone writer Dave Marsh was at the event which he described as “your most paranoid fantasy about where the ethnic cleansing of the rock radio could ultimately lead.” Legendary musician Nile Rodgers who was behind some of the greatest disco music of all time, later likened the event to Nazi book burning.

Dahl, who continues to broadcast and podcast, has always played down the significance of the event and rubbished arguments it had any homophobic intent.

Sales of disco music slumped after the event as record labels became twitchy about their output though the legacy of the genre is as strong as ever.

This week, at the game closest to the 40th anniversary of Disco Demolition, the White Sox will hand out commemorative t-shirts. Dahl will also be present on the night, given the honour of throwing the first pitch. Such a celebration does not sit well, especially in Pride month, and it turns the spotlight on an event where essentially the burning of art was celebrated.

In a statement, the White Sox argued: “This year's Disco Demolition T-Shirt giveaway was intended to recognize the anniversary of a historic off-the-field moment that has been connected to the organization over the past 40 years.

“It is a recognizable part of Chicago baseball history. We recently were made aware of comments criticizing the T-Shirt giveaway and are in the process of reviewing feedback.

“We have been communicating with our community partners who have raised concerns to make it clear that the intent of this giveaway was only meant to mark the historical nature of the night 40 years later.

“We have reinforced that the White Sox organization is dedicated to advocating for a safe, welcoming ballpark experience for all people and communities, and will continue to engage in important, informative discussions with our fans and partners to build toward positive change through sports. We remain proud of our franchise's longstanding record on advocating for inclusion and diversity.”

Whatever the franchise argues, this is an event which one can hardly believe is still be talked about in such glowing, nostalgic terms by so many.

This article first appeared in The Sportsman on 12/07/19

x
Suggested Searches:
Tyson Fury
Manchester United
Marcus Rashford
Lewis Hamilton
F1
Air Jordan
More
us-sports
From Sports Fan To Sports Superstar, Tony Parker Recounts Rise...
“I never could have imagined such a destiny. Not even in my wildest dreams, in my childhood bedroom [ ... ]
us-sports
Netflix’s ‘The Last Dance’ Succeeds In Bringing Jordan To Life...
The Last Dance came to a close this week as Netflix released the final two episodes of the incredibly [ ... ]
us-sports
Netflix’s ‘The Last Dance’ Shows How Tragedy Led To Jordan Quitting...
Episode seven of Netflix’s latest docu-series, ‘The Last Dance,’ which gives viewers [ ... ]
us-sports
“It Must Be The Shoes” - The Nike Powerhouse That Michael Jordan...
In a collaboration spanning over 30 years, accumulating billions of dollars in revenue and is said to [ ... ]
us-sports
Why Bill Simmons' $7M A Year Sports Podcast Deserves Your Full...
For the majority, 2020 so far isn’t turning out to be the most vintage year, especially in the [ ... ]
us-sports
Netflix’s The Last Dance Sheds Light On Kobe’s Rivalry With...
Episode five of ‘The Last Dance’ opens to the Nas classic ‘If I Ruled The World,’ [ ... ]
us-sports
Netflix’s Jordan Doc 'The Last Dance' Sheds Light On The Real...
“I could have been a bomb, I could have been in jail, I could have been dead,” says Dennis [ ... ]
us-sports
Five Things We Learned From Netflix's New Michael Jordan Doc...
The first two episodes of Netflix’s new Michael Jordan docu-series, ‘The Last Dance,’ [ ... ]
us-sports
''I'm Going To Disney World'' - Why Super Bowl MVPs Celebrate...
52 million. That’s the average number of visitors to Walt Disney World in Orlando, Florida every [ ... ]
us-sports
With His 15 Minutes Of Super Bowl Madness Patrick Mahomes Breaks...
On February 6 2013, days after Joe Flacco and the Baltimore Ravens produced a narrow victory over the [ ... ]
us-sports
Forget Chewing Tobacco, Now Major League Baseball Lifts Ban...
Major League Baseball has jointly announced in agreement with the Major League Players Association "significant [ ... ]
us-sports
Colin Kaepernick Set For NFL Return After Being 'Blackballed'...
Even those with the most basic knowledge of American Football have come to know and recognise the name [ ... ]
us-sports
Stop! Stop! He's Already Dead - The American Coach Disciplined...
Ever been penalised for being too good at something? It’s a situation poor American football coach [ ... ]
us-sports
NBA Legend Shaq O'Neal Pays For Victim Of High School Shooting...
Shaquille O’Neal is a literal giant of a man. Standing all of seven-foot-one with a size 22 shoe, [ ... ]
us-sports
Sneakergate: Nike Stock Shares Plummet After Epic Zion Williamson...
Nike and basketball are inextricably linked. One goes in hand (or foot) with the other, although the [ ... ]
us-sports
Usain Bolt Ties NFL Record With Sensational Sprint Effort Ahead...
Usain Bolt's foray into the world of football (or 'soccer' for our American friends) was [ ... ]
us-sports
Super Bowl LIII Preview: Los Angeles Rams Vs New England Patriots
Super Bowl LIII, the 53rd instalment of one of the world’s most highly anticipated and watched [ ... ]
us-sports
Crunch Time As NFL Reaches Final Round Of Regular Season
The final week of the NFL regular season is notoriously difficult to forecast. Teams that have locked [ ... ]
us-sports
Rejuvenated Cleveland Browns Headline The NFL Week 16 Betting...
Back in 2013, Andy Reid’s Kansas City Chiefs started the season on fire, running up a 9-0 record [ ... ]
us-sports
Aaron Rodgers To Help Green Bay Packers Beat Atlanta Falcons...
Fired Green Bay head coach Mike McCarthy placed a full-page ad in all the Wisconsin papers yesterday [ ... ]
us-sports
GREEN BAY PACKERS HAVE NOT GIVEN UP ON WILDCARD PLACE - NFL...
With five weeks to go until playoff spots are finalised, every game takes on extra significance, unless [ ... ]
us-sports
Jags And Steelers Feature In Exciting NFL Week 12 Betting Picks
Last weekend’s slate of games featured potential Super Bowl previews, crazy shoot-outs, fierce [ ... ]
us-sports
LA Rams To Get The Better Of Kansas City Chiefs As NFL In Potential...
In what could well be a preview of the Super Bowl, Andy Reid’s 9-1 Kansas City travel to the West [ ... ]
us-sports
Tom Brady Backed To Get The Better Of Aaron Rodgers AS New England...
Back in 2016, a University of Oklahoma team featuring Baker Mayfield travelled to Lubbock to take on [ ... ]
us-sports
NFL Tips: The Philadelphia Eagles Are The Value To Beat Beleaguered...
When the schedule was announced, AFC runner-up Jacksonville taking on the Super Bowl champion Eagles [ ... ]
us-sports
Powerful Defences Key To Our NFL Week 7 Fancies
We’re going with the old adage that “Defense wins championships” this week, with three [ ... ]
us-sports
NFL's Buccaneers Try Wild Rugby-style Trick Play
American Football and Rugby share a common ancestry and the roots of gridiron forced their way [ ... ]
us-sports
Seahawks To Beat Raiders And Feature In Best Bets For Week 6...
The last time the Raiders played in London against the Dolphins in 2014, they moved to 0-4, lost Derek [ ... ]
us-sports
LeBron James Sinks 40-ft Shot To Beat The Clock For Lakers
Lebron James is certainly 'box office' and he’s brought his appeal all the way to LA this [ ... ]
us-sports
Jacksonville Tipped To Stop The Patrick Mahomes Hype Train In...
Oakland and Jon Gruden got their first win of the season last week when they downed Cleveland 45-42 [ ... ]