Football
News
The Frenchman scored the only goal to see United past Milan
Kris Voakes
22:02, 18 Mar 2021

Paul Pogba is the kind of figure who never just fades into the background. He’s either untouchable or underwhelming, depending on who you speak to. For every social media post that gets a like, there will be a detractor who feels they have more fuel for their dislike of him. He’s never out of the spotlight, one way or the other.

There was no questioning his big-game quality on Thursday night, though, as he made an immediate impact upon his return from injury to send Manchester United into the quarter-finals of the Europa League. Coming on for Marcus Rashford as a half-time substitute, the Frenchman scored within three minutes of his introduction. It was enough for a 1-0 second-leg win and a 2-1 aggregate success against an AC Milan team who gave United a real run for their money over the course of the tie.

As the ball pinged around the Milan box and nobody could get a clean strike on the ball to either send it goalwards or hammer it clear, it suddenly ran to Pogba on the left of the goal five yards out. The midfielder took his time, allowed himself a touch, showing a cool head when others were looking frantic, and laced a shot high inside the near post just as Gianluigi Donnarumma was making a move away to the far stick. It was simple but brilliant.

United had threatened at times in the first period, particularly when Daniel James got on a run, but it wasn’t until Pogba came on and took his chance that they looked in any way in control of the tie. He was the difference-maker both on the scoresheet and in the minds of his United teammates, as they took an extra step up in quality the second Pogba stepped foot on the field and started to give them real purpose on the ball. 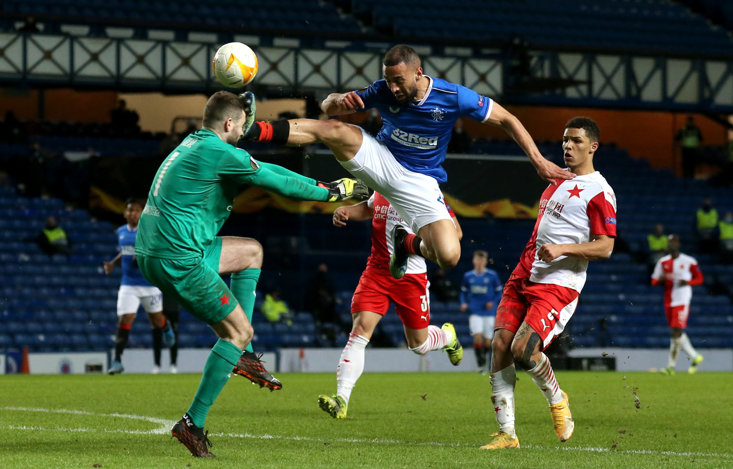 How Rangers could have done with a presence like Pogba over at Ibrox. Steven Gerrard’s side failed to capitalise on a 1-1 draw in their away leg at Slavia Prague, going down 2-0 in the home leg as they finished with nine men on their way out of the competition.

Kemar Roofe saw red for a high boot into the face of goalkeeper Ondrej Kolar and Leon Balogun earned a second yellow card for a foul on Lukas Masopust as the Gers were ousted in the last 16. They were already 1-0 down by that point after Peter Olayinka’s first-half goal, and Nicolae Stanciu soon made the most of the extra space to score the killer second.

That leaves Britain with two representatives in the quarter-final draw after Tottenham’s earlier exit to Dinamo Zagreb and Arsenal’s two-leg win over Olympiacos. And with Pogba returning at just the right time, Manchester United could be a huge threat in the Europa League once again.