It was scrappy and bad tempered at times. It was difficult to watch, even. But two second-half tries earned South Africa a 27-9 win in the Second Test against the British & Irish Lions to send the series to a thrilling decider next Saturday in Cape Town.

After the controversy of the last few days, with Springboks director of rugby Rassie Erasmus’ 62-minute video broadside at the refereeing in the First Test having shocked many, perhaps there were always likely to be flashpoints. And tempers flared during a bitty, stop-start first half which, ironically, ended up lasting 62 minutes such was the multitude of incidents referee Ben O’Keeffe had to deal with.

The Lions led 9-6 at half-time after Dan Biggar kicked three penalties to Handre Pollard’s two from three attempts, but that was only half the story. After Alun Wyn Jones and Eben Etzebeth had a coming-together early on, the Lions were soon reduced to 14 players when Duhan van der Merwe’s petulant trip on Cheslin Kolbe led to him seeing yellow.

However, Kolbe was soon in the sin bin himself after he took out Conor Murray in the air, sparking an extended huddle of bodies as the two sides came together. Following another lengthy delay while O’Keeffe was shown footage by the TMO, Kolbe was sent from the field for 10 minutes but there was no further action. 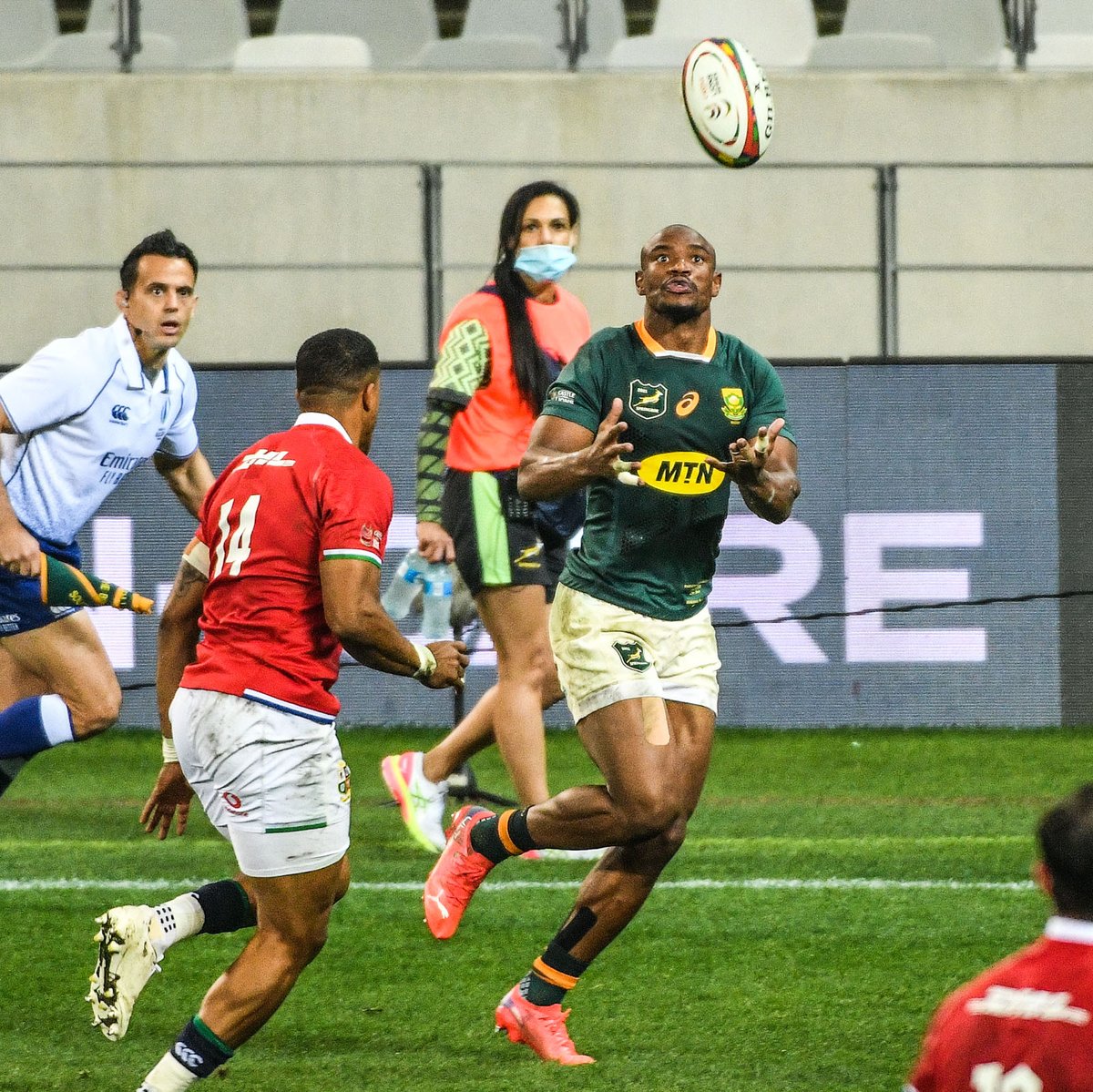 With both sides restored to 15, the second half started with South Africa taking a lead they would never lose, Makazole Mapimpi stretching over for his 15th try in 16 Springbok appearances after taking Pollard’s chip through.

Biggar then missed the chance to give the Lions a 12-11 lead, and by the three-quarter mark the Springboks had a two-score advantage thanks to a Lukhanyo Am try confirmed by the TMO and Pollard’s conversion.

As time began to ran out for the tourists, silly infringements started to cost them dearly, with Pollard kicking three more penalties as the Lions became more leggy in the closing stages.

The 27-9 result levels the series, while the performance of referee O’Keeffe and his team under an intense spotlight were worthy of significant praise. With one game to go and all to play for, the increasingly fraught relationship between the two camps promises to make the Third Test a nail-biter.

x
Suggested Searches:
The Sportsman
Manchester United
Liverpool
Manchester City
Premier League
More
rugby
South Africa, More Teams Or Relegation? How To Improve The Six...
It’s been quite the week for the international rugby community. France continued their march to [ ... ]
rugby
England Capitalise On Welsh Ill-Discipline To Grind Out Six...
Penalty. Kick. Penalty. Kick. Repeat. The reliable boot of Marcus Smith earned England a 23-19 win over [ ... ]
rugby
Scotland Defeat England In A Dramatic Calcutta Cup Clash
Scotland beat England 20-17 on home soil at Murrayfield, to keep hold of the Calcutta Cup. This Six [ ... ]
rugby
Six Nations: Former England Star Corbisiero Predicts Tight Encounter...
England get their 2022 Six Nations campaign underway on Saturday when they take on Scotland at Murrayfield.  [ ... ]
rugby
Everything You Need To Know About The 2022 Six Nations
The Six Nations, one of the most historic and famous competitions in the whole of sport, is back this [ ... ]
rugby
Eddie Jones Names Six Uncapped Players In England's Six Nations...
England head coach Eddie Jones has surprised many people by naming SIX uncapped players in his Guinness [ ... ]
rugby
Can Cook, Will Cook: Eddie Jones' England Take Home The Cup...
England beat Australia 32-15 to clinch the Cook Cup in a thrilling, back-and-forth match in front of [ ... ]
rugby
Morne Steyn Breaks British and Irish Lions' Hearts Again With...
Morne Steyn has broken the British and Irish Lions hearts once again with a last-gasp penalty that secured [ ... ]
rugby
British & Irish Lions' Time Concerns Are A Problem Across The...
Sport as a whole is struggling to come to terms with the concept of time right now. As The Hundred reshapes [ ... ]
rugby
Rassie Erasmus Needs To Be Sanctioned Heavily, However Justified...
It took 62 minutes for Rassie Erasmus to rip apart the refereeing performance in the British Lions’ [ ... ]
rugby
Warren Gatland Inspires British And Irish Lions Comeback Win...
The British and Irish Lions’ incredible second-half renaissance stumped world champions South [ ... ]
rugby
England Emerge Victorious At Twickenham Despite Spirited Display...
England were pushed further than they probably would have expected when they took on the USA in [ ... ]
rugby
British and Irish Lions: Warren Gatland Can Reach Iconic Status...
Warren Gatland will take his British and Irish Lions squad to South Africa this summer for his third [ ... ]
rugby
Alun Wyn Jones To Captain British & Irish Lions On South Africa...
Wales legend Alun Wyn Jones will captain the British and Irish Lions squad ahead of their tour in South [ ... ]
rugby
England Dig Deep Against France To Claim Fourth Six Nations...
It wasn’t pretty but England got the job done, beating France 10-6 in a gripping low-scoring classic [ ... ]
rugby
Eddie Jones' 2021 Failures Could Set England Up For World Cup...
After a review by the RFU into England’s woeful Six Nations performance, Eddie Jones has kept [ ... ]
rugby
Wales Win Six Nations Championship After Scotland's Late, Late...
Wales have regained the Six Nations Championship they last won in 2019 after France went down to a dramatic [ ... ]
rugby
Can History Repeat Itself? When Wales And France Shared The...
Wales are still favourites to win the Six Nations championship despite missing out on the Grand Slam [ ... ]
rugby
What Do Wales Need Scotland To Do Against France To Win The...
This is an unprecedented Six Nations campaign. For the first time we have an extra game being played [ ... ]
rugby
Six Nations: Last-Gasp France Try Cruelly Denies Wales Grand...
It promised to be a ‘Super Saturday’ unlike any other and it’s safe to say it delivered [ ... ]
rugby
England's Final Six Nations Game Against Ireland Is More Than...
You’d be forgiven for thinking England’s final Six Nations game against Ireland was a dead [ ... ]
rugby
Late Maro Itoje Try Gives England A Much-Needed Win Over France
England got back to winning ways in the Six Nations Championship by the finest of margins on Saturday [ ... ]
rugby
The Stats Don't Lie, Ill-Discipline Has Cost England The Six...
We’ve all seen the headlines. Too many mistakes and too many penalties have cost England in a [ ... ]
rugby
Alun Wyn Jones' Has Shown In The Six Nations Why He's A Lions...
146 caps, fifteen years of service and one cheeky smile, Alun Wyn Jones has been the beating heart of [ ... ]
rugby
Poor Officiating Puts Dampener On Wales Win Over England That...
Wales have kept their hopes of a Grand Slam alive, secured a bonus point and won the Triple Crown, with [ ... ]
rugby
England Need To Be Cool, Calm And Composed Against Wales In...
Eddie Jones is imploring his England side to be on the alert for any scheming from Wales captain Alun [ ... ]
rugby
France v Scotland Six Nations Game Called Off After Latest Positive...
France’s upcoming Six Nations match against Scotland, due to take place this Sunday, has been [ ... ]
rugby
Jack Nowell Aiming For England Recall When He Returns From Injury
England and Exeter winger Jack Nowell looks set to return to action in March after being sidelined for [ ... ]
rugby
Can Eddie Jones Really Blame A Lack Of Fans For England's Six...
England’s start to the Six Nations has been underwhelming to say the least. An opening day defeat [ ... ]
rugby
It Wasn’t Pretty But England Get Back On Track In The Six Nations...
It wasn’t pretty and wasn’t as easy as past England triumphs over Italy but Eddie Jones’ [ ... ]