Tonight, Cristiano Ronaldo and his Juventus side will look to overturn a 2-1 deficit against Porto as they aim to make it to the last eight of the Champions League. It almost feels like we have been here before, and we know how this will end. Ronaldo, with 134 Champions League goals to his name, thrives under these circumstances, lives up to the big occasion and time and time again scores the pivotal goals that turn European ties around.

Don’t believe us? Here are just three times Ronaldo has turned a Champions League tie on its head.

In 2016 in the quarter-finals, Real Madrid found themselves 2-0 down heading into the second leg at the Bernabeu. A shocking first leg performance had left the Spanish media all over Los Blancos as they attempted to turn around the tie, and remember, this is when Barcelona were the reigning champions of Europe.

Up stepped Ronaldo to save the day. Within the space of three first half minutes he had leveled the tie on aggregate with two goals, the second a towering header, before 13 minutes from time, one of his famous free-kicks found its way into the bottom corner. The Bernabeu rejoiced as Ronaldo lapped up the adoration. They’d go on to win the Champions League that year, as they began a period of unrivalled dominance. 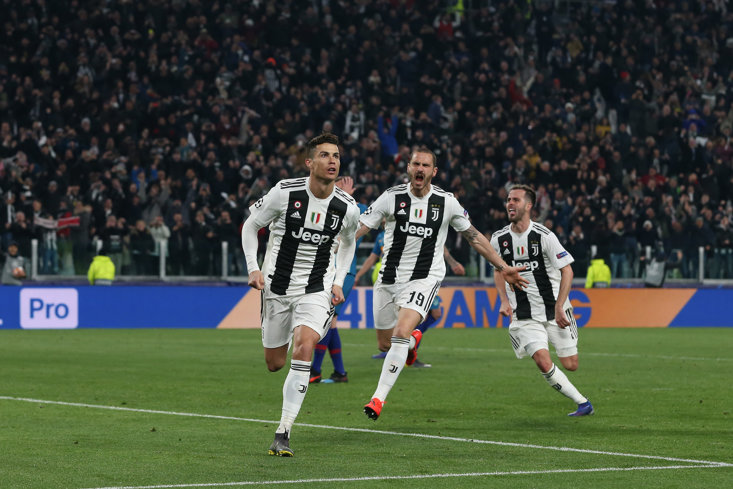 Ronaldo proved he didn’t need the white shirt, or the roar of the Bernabeu crowd to produce his best stuff against his old rivals. Atletico Madrid have so often felt the power of the Portuguese forward but perhaps no more so than in 2019. His side had been completely outwitted in the away leg, losing 2-0 to Diego Simeone’s side, but once again he produced his best stuff in front of his own fans.

His first was a bullet header from close range, his second was another leaping header in the second half, given by goal line technology after it seemed at first glance like Jan Oblak had kept it out. Then came his moment. Federico Bernardeschi was tripped in the box and with just five minutes to go Ronaldo had his moment in the spotlight. It was never in doubt, even up against the best keeper in the world. Yet another second leg hat-trick saw his side progress to the next round, the one-man machine had done it again. 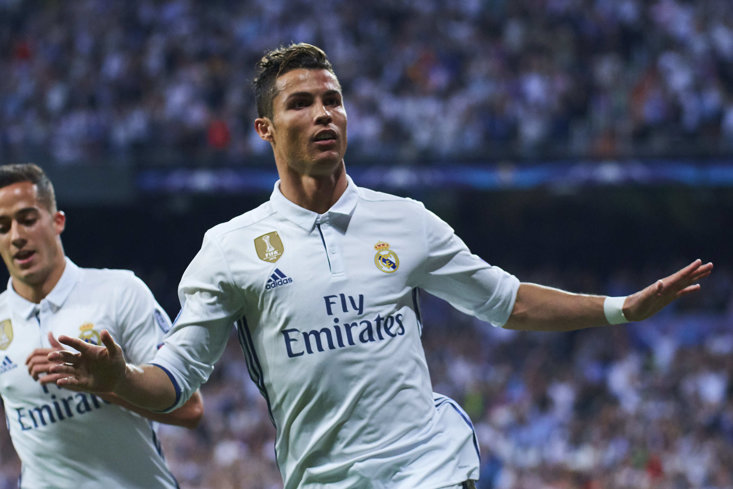 One of the most controversial Champions League ties in recent memory (before the days of VAR) saw Real Madrid actually take a lead back to the Bernabeu having beaten Bayern on their own ground as two goals from you know who overturned Arturo Vidal’s opener. The second leg by comparison was utter chaos.

Robert Lewandowski converted from the spot to put the visitors back in the game before Ronaldo scored yet another crucial header for his side. An own goal almost immediately by Madrid defender Sergio Ramos then levelled the tie on aggregate, Vidal was sent off and the game then went to extra-time. But, when it really mattered, Ronaldo stepped up again.

He fired home his fourth goal of the tie in extra-time, before completing a second-leg hat-trick with his fifth and although both goals were offside and wouldn’t have stood today, he finished the chances with aplomb as Madrid went through 6-3 on aggregate. They ended that season with yet another Champions League win.

So Porto, who have been hurt before by a Ronaldo rocket, know exactly what to expect. This is his tournament, and in the second leg, when it really matters, he steps up to the plate. Don’t be surprised to be reading about yet another CR7 inspired comeback tomorrow morning.