Football
News
Cristiano Ronaldo and Co will be one of the favourites at this summer's tournament
Elliott Bretland
16:06, 31 Mar 2021

When Portugal line up against Hungary at Euro 2020 on June 15, it will be almost five years since they won the last instalment of the competition and this time around, they look even stronger.

Of course, with Cristiano Ronaldo leading the line, A Selecao will always have a strong chance of going the distance in tournament football but a quick glance of their current squad and it is packed with talent. With Manchester City’s Ruben Dias in defence, United’s Bruno Fernandes in midfield and Liverpool’s Diogo Jota in attack, they boast Premier League quality right through the spine of the team.

On Wednesday, they disposed of Luxembourg 3-1 to top their World Cup qualifying group. They may have gone behind but Jota and Ronaldo both found the net to give them three points and fire them to the top of the standings, above rivals Serbia on goal difference after three games. With Republic of Ireland and Azerbaijan also in the group, you wouldn’t bet against the Portuguese going to the World Cup. 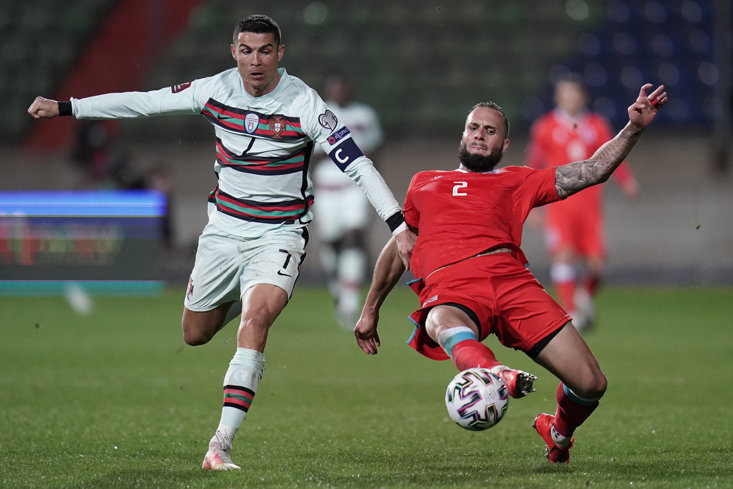 Looking to this summer’s Euros and you have to say Fernando Santos's team will certainly be one of the favourites.

For more than two decades, it seems Portugal have been set up to excel in the current era of one striker and false nines. For so long, the nation has only boasted one out and out striker at a time, relying on the excellence of an attacking hub to score goals. First it was Pauleta and Nuno Gomes and this summer, Andre Silva is the recognised attacker, in the traditional sense. Of course, though, when you have Ronaldo, you have the skills and attributes of about four frontmen in one. Jota, too, excelling for Liverpool, buzzes round the frontline with frightening efficiency. In his first five starts for his country, he has two braces, six goals and two assists. Such an attack is ruthless and oh so dangerous.

City’s Joao Cancelo is in there too along with club team-mate Bernardo Silva while Wolves trio Ruben Neves, Joao Moutinho and Pedro Neto are also part of the squad. Joao Felix, the exciting Atletico Madrid talent is included, as is Sporting youngster Nuno Mendes. Only 18, he is an excellent left-back.

The brick wall solidity of Dias, the magic of Fernandes and Ronaldo’s sheer desire to win makes Portugal a formidable side and that’s before you sprinkle the extra ingredients they boast in this squad. However, in saying that, they will have to shine to progress having been put in a Group of Death with France and Germany. Those encounters are mouthwatering and it’s perhaps lucky for us as fans that the best third-place team will progress from the group so we possibly get to see the three giants in the tournament for longer.

Portugal were triumphant last time out. And could claim glory again in even more emphatic style.

Check out our other Group F previews here: France, Germany and Hungary.