Cristiano Ronaldo. As always, the focal point and the centre of attention became the only ‘unattached’ player at this year’s World Cup this week. One record wasn’t enough though, as he converted a second-half penalty to become the first man to score at five World Cups as Portugal beat Ghana 3-2.

From 2006 to 2022, this has been his stage. He’s Portugal's record goalscorer with 118 goals and although the Word Cup trophy is still pending, he has been a constant over the past 16 years.

Yet this is a Portugal squad that is so much more than Ronaldo. They boast one of the strongest squads in the tournament with Joao Felix, Bruno Fernandes and Joao Cancelo all started for Fernando Santos and Rafael Leao came off the bench to complete the scoring.

Ronaldo opened the scoring, but having been pegged back by Andre Ayew, it was over to the next generation. Joao Felix stepped up to the plate before Leao added the extras, and the pair that were just six and seven when Ronaldo scored his first World Cup goal, were now joining him at the party.

The first half was a miserable affair as Ghana contained Portugal, while the African side showed glimpses of promise. Mohamed Kudus sparkled in Ghana’s midfield with some wonderful touches, but Ghana were sloppy at times in the transition and gave Portugal several chances to get in front. They went in at half-time level but the second half would finally give us some goals.

Kudus broke through the midfield and fired a shot wide as Ghana started to push on but they were down to ten men when Alidu Seidu was very lucky to stay on the pitch. He was shown a yellow for a foul and then pushed his head into Joao Felix’s face, which could have been seen as a straight red by another referee.

However, Portugal would gain their own slice of luck just after the hour mark when Ronaldo went down in the penalty area after a soft challenge. VAR didn’t overturn the decision and of course Ronaldo stepped up to smash the penalty home. 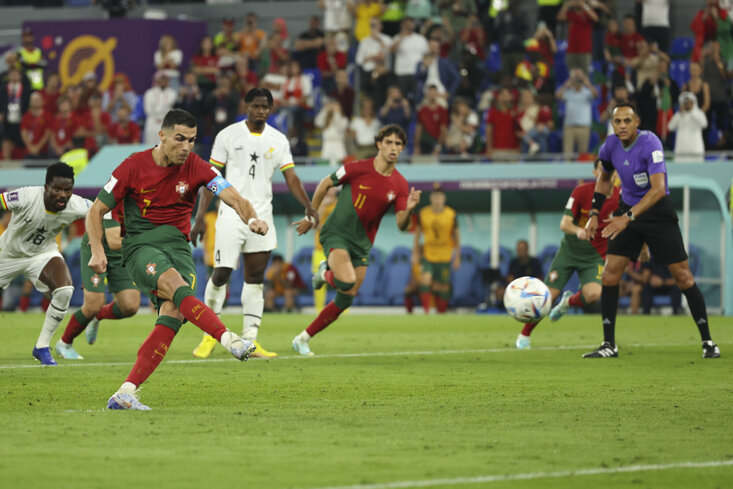 It looked like that penalty would seal all three points for Portugal. But Ghana came back fighting. That man again Kudus got himself further forward and found himself in space in the box. He cut the ball back for Andre Ayew to stab home from close range and all of a sudden, the game was level.

It was as if Ghana didn’t have any belief until they went a goal down. But they are a side with real attacking quality and became the first African team to score a goal at this tournament. As quickly as they were level though, Portugal found another.

A defensive mistake allowed Joao Felix to get in and he found a wonderful finish to put Portugal 2-1 in front. It was the gut-wrenching punch that ended Ghana’s hopes. Moments later, Rafa Leao made it three.

He only just come onto the pitch but made a wonderful run and was found by Bruno Fernandes, before slotting the ball into the far corner. It was the Milan man’s first goal for his country, but the scoring wasn’t complete there.

Osman Bukari got on the end of a cross to pull one back and with nine minute added Ghana went all out for an equaliser. The rush didn’t quite reach the goalscorer however, who did Ronaldo’s ‘SUI’ celebration in the corner, with the Portuguese legend having been substituted. They almost stole the point as Diogo Costa rolled the ball out but Inaki Williams slipped at the crucial moment, having surprised the keeper with his presence.

In the end, it wasn’t enough for Ghana, but they put up a great fight. For Portugal, it is the case of job done - just.

Before 2002 they'd only qualified for one World Cup, now Portugal are ranked 8th in the world and are genuine contenders for this one. But perhaps what is more impressive than all of that is the generation coming through. Portugal are likely to contest the next few World Cups, with or without Ronaldo.