Motorsport
News
The Finnish driver has spoken of his frustration in the past...
Simon Lillicrap
17:30, 29 Apr 2021

The Formula One circus visits its next destination this weekend as the Portuguese Grand Prix takes centre stage. Although Max Verstappen came out on top last time in Italy, ahead of Lewis Hamilton in a thrilling battle, the Englishman’s Mercedes teammate Valtteri Bottas was left pointless after a big crash with George Russell.

That result leaves Bottas fifth in the early standings, having finished third in Bahrain while he trails Hamilton by 28 points already. The Finish superstar arguably faces one of the toughest jobs in sport. In Formula One, you have a teammate, but often, they can be your fiercest rival. When your teammate just happens to be the greatest Formula One driver of all time, things can get a little frosty.

I hate to be second. I am not a number two.

Those were Bottas’ words in season three of Netflix’s Drive to Survive as they documented his attempt to overhaul his illustrious rival. “To be on the same team as Lewis, to be honest, sometimes it is a pain in the ass because he is pretty quick, he is tough to beat,” he continued. “When Lewis beats me, it’s like turning a knife in me. People can think whatever they want, I’m here to win.”

With a total of nine career race wins to his name in comparison to Lewis Hamilton’s 94, Bottas talks a good game and clearly is an incredibly talented driver, but although Toto Wolf won’t ever admit it, it is clear who Mercedes’ number one is. Formula One teammates perhaps share the strangest relationship of any sporting colleagues. In team sports, football and rugby, of course their own individualistic drive, but ultimately, if the team wins, everybody is happy.

In solo sports such as tennis and golf, you are solely responsible for your own performance and you do not have to please anybody other than yourself. Formula One lies in this strange no-man's-land somewhere in between the two. It is a solo sport, Bottas wants to beat Hamilton more than anything in the world, but then you have the Mercedes team bosses looking solely to accumulate points to win the Constructors Championship. This can lead to team orders being ignored, or drivers taking matters into their own hands, as Bottas did when purposely qualifying in third rather than second last year in Sochi. 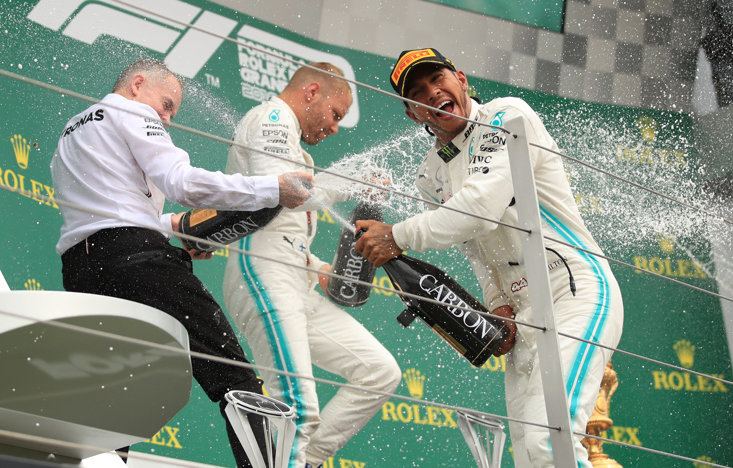 Hamilton is no stranger to scraps with teammates of course. Fernando Alonso and Jenson Button pushed him all the way in his early year, but at Mercedes only Nico Rosberg has got the better of him, as the German pipped him to the 2016 title. In the last race of that season, after a tense campaign, Hamilton ignored team orders from the pit lane and from first place he attempted to push Rosberg back into the chasing pack, but the German held on to secure the title before retiring just days later.

So that brings us up to this weekend’s Portuguese Grand Prix. Bottas will be desperate to avoid a repeat of the 2020 race where even though he finished second, he was a whopping 25 seconds behind his teammate. He was forced to watch the celebrations after the race as Hamilton celebrated wildly having passed Michael Schumacher’s record of 92 race wins, while he was once again forced to play the role of the bridesmaid. The Finn's contract runs until the end of the 2021 season, but then he may be forced to take a difficult decision. The Englishman is now 36-years-old but shows no sign of slowing down while Bottas is five years his junior, but must be desperate to win a world title.

Unlike Rosberg, it shows little sign of happening at Mercedes until Hamilton has hung up his driving gloves. Does Bottas have the patience to wait until Hamilton retires? Unlikely. The life of a number two driver may not be one he wants to continue much longer...