Rugby League
News
The Tigers' 40-24 defeat at home to Warrington ended the coach and captain's associations with the club
Kris Voakes
10:33, 17 Sep 2021

It was the exact opposite of the dream ending Daryl Powell and Michael Shenton had been hoping for. A win would have taken them into the end-of-season play-offs and left them in with a chance of walking away from Castleford Tigers with the Betfred Super League trophy under their arms.

What transpired was an absolute mauling. The fervent home crowd at the Jungle had been silenced within half an hour, with Warrington Wolves racing into a 26-0 lead. They made a fist of it near the end, turning a 32-point deficit into a 40-24 reverse, but the Tigers are out of the play-off picture and Shenton heads off into retirement nursing a dislocated shoulder which ended his farewell appearance early.

Matty Ashton grabbed a hat-trick for Warrington, who head into next Thursday’s play-off eliminator against either Leeds Rhinos or Hull Kingston Rovers on a three-game winning streak, while Jake Mamo crossed twice.

It will be little consolation to Powell right now that the Wolves team he will take over in a few months’ time look to be in fine shape for a tilt at major honours. Right now he will curse the way his eight-year reign at Wheldon Road has ended.

Despite winning the League Leaders’ Shield in 2017, Cas have fallen short of the two flagship achievements in British rugby league. Defeats in the 2014 and 2021 Betfred Challenge Cup finals hurt, and the 2017 Grand Final defeat to Leeds Rhinos still takes some explaining to many fans who had watched Castleford dominate the Super League season that year.But when the dust has settled, Powell will definitely be able to look back on his time with great satisfaction having taking them from constant attempts to establish themselves as a Super League side to one of the lead runners at the front end of the pack every season 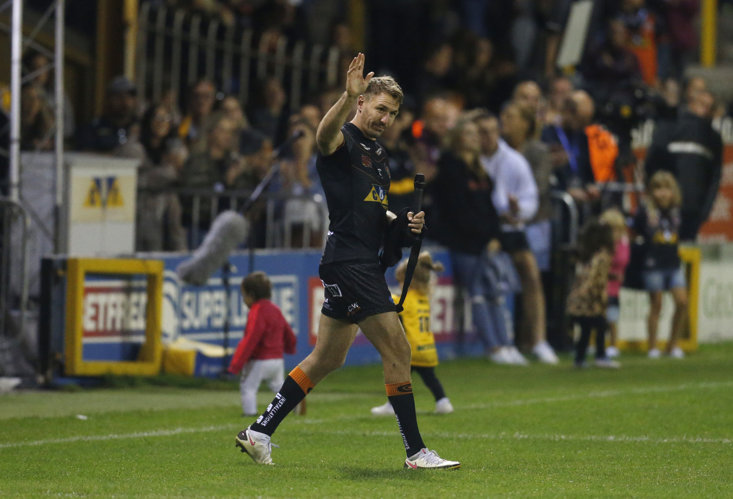 SHENTON SAYS HIS GOODBYES TO CAS FANS AFTER THE GAME

For Shenton it will be a bitter pill to swallow that his withdrawal midway through the defeat left him unable to play a part in Cas’ late burst as they attempted to turn the tables from 32-0 down. Peter Mata’utia crossed twice and Jordan Turner and Grant Millington also dotted down as the home side came back to within eight points at one stage. They were also one man to the good after Mike Cooper was sent off for a shoulder charge, but a Connor Wrench try was enough to settle matters in the Wolves favour.

Skipper Shenton has spent all but two seasons of his 17-and-a-half-year career at Castleford, and there were emotional scenes afterwards as he took the microphone to say goodbye to the Tigers fans.

The former England centre leaves behind a side which will be led by former Hull FC coach Lee Radford in 2022, while Powell will succeed Steve Price at Warrington once their current campaign comes to an end.

Castleford’s defeat was great news for Leeds and Hull KR, who meet at Emerald Headingley on Friday night, with both clubs guaranteed of a ticket to next week’s play-offs thanks to the Tigers’ loss.