Christian Eriksen has his eyes set on reclaiming his place in the Danish national side for this year’s World Cup in Qatar.

The 29-year-old, who suffered that terrible cardiac arrest at last summer’s Euro 2020 but thankfully survived, wants to make an incredible return to the international stage. Now fitted with an implantable cardioverter defibrillator (ICD) device, Eriksen is desperate to return to action on the pitch. He is on the lookout for a new club after having his contract mutually terminated with Inter Milan after a ruling disallowed him from playing this season due to his new fitted device. However, this setback hasn’t thwarted his ambition to pull on the red shirt of Denmark once again. He has been working hard on his own personal training and he has spoken to Danish broadcaster DR1 of his dream return to the national team.

“My goal is to play in the World Cup in Qatar,” he said. “I want to play. That’s been my mindset all along. It’s a goal, a dream. Whether I’ll be picked is another thing. But it’s my dream to come back. I’m sure I can because I don’t feel any different. Physically, I’m back in top shape.

“My dream is to rejoin the national team and play at Parken again and prove it was a one-timer and that it won’t happen again,” Eriksen added. “I want to prove I’ve moved on and that I can play [for] the national team again. Again, it’s up to the manager to assess my level. But my heart is not an obstacle.”

Locations for his current individual training routines have included former club Odense in his homeland, and more recently Chiasso in Switzerland. There is no questioning his desire to return to the beautiful game, and while people may be concerned for his welfare after the traumatic events in Copenhagen last June, he seems ready for a return. It’s worth considering that Eriksen wouldn’t be back on the grass training in the bid to make a claim for a World Cup spot in Kasper Hjulmand’s squad had medical experts told him it was out of the question. 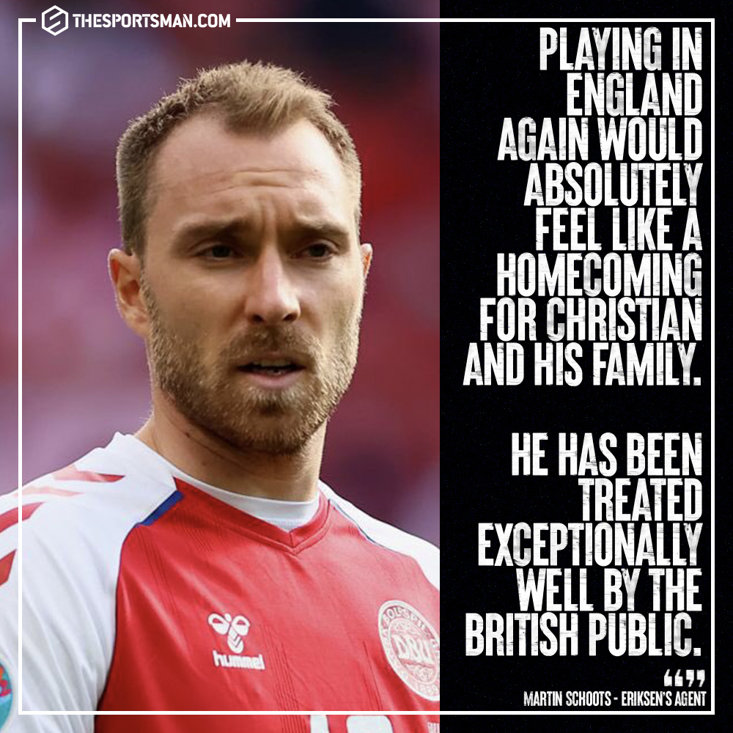 With the former Tottenham Hotspur man on the hunt for a new home he may have a couple of options back in the Premier League, including Spurs. There is no denying the club have lacked that creative spark in midfield that Eriksen provided during his six-and-a-half seasons in north London, and a return may suit both parties, and Conte even brought the great Dane to Inter, so there is history there, too.

Then there is Newcastle United who are into the first transfer window of their new era and will undoubtedly look for some shrewd signings, plus big names in the bid to keep them from dropping into the Championship. With Eriksen being a free agent, it would be a shrewd move that would be a boost to the Magpies. They would be getting a proven player without having to pay a transfer free which would allow them to strengthen in other key areas in the same window.

Of course, the creative midfielder may have to take great caution moving forward and we are not sure at what level he will truly return, but the idea of Eriksen not only coming back to life, but to return to the highest echelons of the game is a truly inspiring story. And if his dream can become a reality, it would be one of the greatest sporting stories the world has ever seen. It’s clear his love of the game is too strong to keep bottled up and the entire world would love to see him doing what he does best, in Qatar later in the year.