A footballer who has racked up more air miles than Carmen Sandiego, Pablo Marí has become the first signing of the Mikel Arteta era at Arsenal. The one man mileage machine is a certified globetrotter, ending up in north London after recurrently bouncing around Europe, particularly his native Spain, before channelling his inner Percy Fawcett and intrepidly venturing across to Brazil.

From the infancy of his career at RCD Mallorca, to the transfer across the Mar Balear onto the Spanish mainland into the heart of Catalona with Gimnàstic de Tarragona, before being the beneficiary of the Middle-Eastern Magwitch as he became nestled under the City Group umbrella in exchange for being pushed from pillar to post, Marí has almost always been on the move.

The 26-year-old’s career trajectory makes up around 23,000 miles of travel to keep on putting down his signature from those hazy early days with Los Bermellones, to ply his defensive trade at seven different clubs in seven different years.

40 days after Arteta’s arrival at Arsenal to begin his managerial career following three and half years as Pep Guardiola’s understudy at Manchester City, defender Marí has now joined his compatriot at the Emirates on a loan deal until the end of the 2019/20 season, fulfilling Arteta’s desire to have a left-footed centre-back in a Gunners defence that is the second-worst in the current top ten in the top tier.

Joining Arsenal is not the centre-back’s first foray at a Premier League club. Marí had previously been on the books at Arteta’s old club City. In total, however, Marí made just a single journey to Manchester, and that was in order to complete his medical. He was immediately shipped out to another Spanish club under the City Football Group umbrella, Girona, before spells at NAC Breda in the Netherlands and Real Club Deportivo de La Coruña. Then came the fairly unique move to Brazil and Flamengo, in which he became only the third Spanish player in the club’s history and ending his association with Man City, who had just become the first side to win the domestic English treble under Pep Guardiola.

“I’ve never met Pep Guardiola or any of the first-team players,” Marí revealed to journalist Andy Mitten, “I’d love to one day speak to him because he’s one of the greatest ever coaches. And when I signed for City, I did so because I felt that one day, I could play for them.” 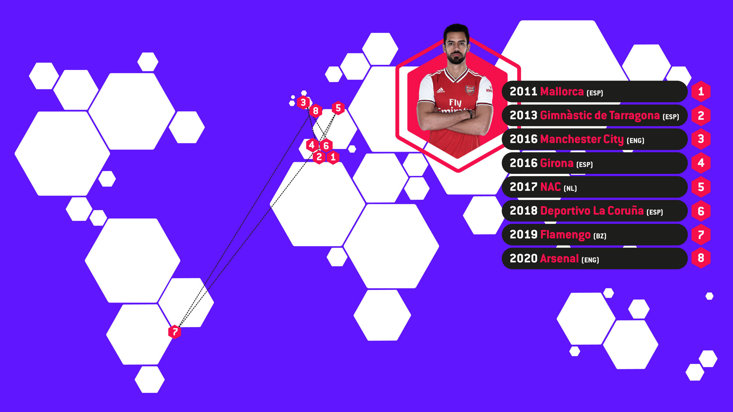 Success avalanched at Flamengo, with Marí being part of the team that won the esteemed Copa Libertadores for the first time in almost four decades.

Marí has moved on a five-month basis and is scheduled to rejoin the South American club on June 30th after the conclusion of the season. The Campeonato Brasileiro Série A is set to resume at the beginning of May. Flamengo are the defending champions, having won their sixth title in 2019.

He made 22 appearances across the league season and will be familiar to Arsenal’s Premier League rivals Liverpool, having played in the Club World Cup Final against Jürgen Klopp’s Reds in December last year. Marí shut Liverpool out for the full 90 minutes before the result was poached by the European champions in extra time.

At Arsenal, the left-footed Marí will be jostling with compatriot David Luiz, who is available to return to selection after suspension from a red card challenge in a league fixture against Chelsea. Another Gunners centre-back Shkodran Mustafi requires a scan on his ankle after suffering an injury against Bournemouth.

The Brazilian Edu, a Gunner between 2001 and 2005, has been technical director at Arsenal since July 2019, his responsibilities including scouting and recruitment which has seen him investigating his homeland for talent, experience further garnered from his time as Corinthians’ director of football.

The ‘Invincible’ alumni stated upon the defender’s arrival to the Emirates: "Pablo is an experienced player who will provide us with additional defensive quality.”

The player himself has declared: “I’m happy to be here today and to have signed for a big club. I’m going to do my best to help my team-mates and the club. When I spoke to my agent, it was a big thing that Arsenal were interested in me. This is one of the best clubs in the world, so I’m absolutely delighted to be joining. I’m really looking forward to playing in this jersey and helping my team.”

Arsenal’s next match is a Premier League fixture away at Burnley. Arteta’s side currently lie tenth in the top tier table but are undefeated in six matches in all competitions under the Spaniard’s stead.