"They had me by the throat. They would not let me quit. Every fight was to be my last one, but it never was. I had no friends in the game, nobody I could talk to even, or ask advice. Everyone cared for money, that's all. I knew it, and this is a very lonely thing."

The fight business is cruel. To quote Joe Frazier, it’s the only sport “you can get your brain shook, your money took and your name in the undertaker book.” It takes no prisoners, has left countless shattered souls by the wayside without mercy and sometimes it can even bring down mountains.

The ballad of Primo Carnera, like the man himself, stands tall in boxing’s long and storied history. The Italian’s arrival in America in 1928 was met with extraordinary fanfare but, with a 16-2 record against a handful of unheralded fighters in Europe, it wasn’t Carnera’s prowess in the ring that had got people giddy.

At six foot six and weighing nearly twenty stone, Carnera was billed as ‘the tallest heavyweight of all-time’ - although he was actually an inch shorter than former champ Jess Willard - and papers of the time dubbed him ‘the human mountain of Fistiana,’ ‘the big fe-fi-fo-fum man’, and, most commonly and derisively, ‘the Ambling Alp.’ 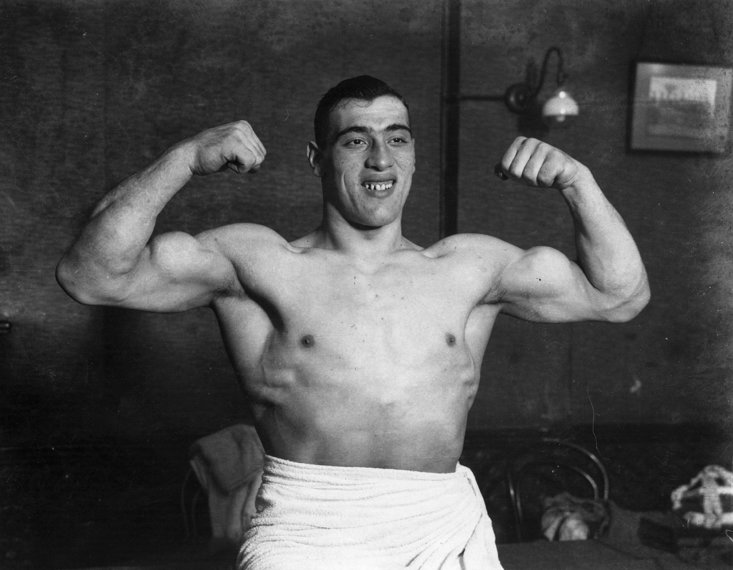 He was little more than a freakshow to many, someone that harkened back to the days of P.T. Barnum. He made millions but never saw a single cent.

Guided from Paris to New York by the scheming Leon See, a boxing manager who would have sold his grandma for a dollar, it wasn’t long before the mob came sniffing. Recognising Carnera’s potential as a crowd-puller, a syndicate headed up by ‘Owney’ Madden, a hoodlum so infamous he was nicknamed “the Killer”, bought him.

Carnera was promptly fed a shopping trolley full of tomato cans, bums and third-rate fighters, beating most by knockout - many because they were paid to fall by the mob. After suffering a painful points defeat to Jack Sharkey in 1931, it didn’t take a bitterly lonely Carnera long to realise his new handlers had nefarious intentions. He wanted out, but by then the long arms of the mob had an iron-clad grip on him and he was in too deep.

By 1933, with a record of 76-6, Carnera found himself in the unlikely position of challenging for a world title fight against reigning champion Sharkey. This time Carnera stopped his old foe, dropping him with a sixth round uppercut, but even this win was tainted with suspicions of a fix.

He defended the title only twice before he was bludgeoned by Max Baer a little less than a year after he’d won it. Carnera was knocked down twelve times before the referee intervened in the eleventh round. It was utterly heart-breaking viewing, akin to seeing King Kong being chopped down from the Empire State Building. Many commentators at the time had lambasted his cumbersome ability, but none could fault the massive heart on display at Madison Square Garden.

A six-round destruction at the hands of a young Joe Louis in 1935 ended any hopes of another shot at the world title. Although he’d pick up a few more wins, after a pair of defeats to Leroy Haynes, the second of which left him hospitalised, Carnera found himself abandoned and penniless. Chewed up and spat out.

​​“I lay in that hospital bed for five months,” he once recalled. “My whole left side was paralyzed. I was in such pain but not one of them came to see me. Nobody came to see me. I had no friend in the whole world.”

He fought on until 1944, retiring after losing a kidney through diabetes, and finished with a 89-14 record, stopping 72 men along the way - a heavyweight record that still stands today. Born a peasant, Carnera reached a level of fame that he would never have dreamed of, but it meant nothing without belonging.

Carnera finally found a happy ending in a different sort of ring. After the Second World War had passed, his giant frame found a welcome home in the world of wrestling. Whether he’d been a strongman at the circus or boxing at the Garden, Carnera had spent a lifetime of being gawked at for the wrong reasons, but in wrestling, at long last, he was treated with adoration. The gentle giant had finally found fulfilment, retiring undefeated after 120 bouts.

“I never knew a man who liked to be among people so much,” said his wrestling manager Joe Mondt. “I can’t understand it when he tells me he was once afraid of them and lonely. Now, he is never happier than when he is among people.”

Carnera passed away on June 29th, 1967, aged 60, but his life and legacy in boxing, equal parts cautionary tale and tragedy, remains as poignant as ever more than half a century later.