Football
News
The Barnet-born star is only the third PSV player to score 10 Eredivisie goals as a teenager this century
Conor Keane
14:35, 22 Feb 2022

PSV Eindhoven is a footballing institution in the Netherlands and while they may be shadowed by the greatness of Ajax in terms of success and talent produced, the Boeren have provided the platform for some great players to flourish.

Ronaldo, Arjen Robben and Memphis Depay are just a handful of some of the stars to have spent time during the early stages of their career at PSV and it seems that the next player to join the list is a promising English teenager.

Noni Madueke is a 19-year-old winger and attacking midfielder from Barnet who took the brave step across the North Sea to find a quicker pathway to first-team football. Having been on the books of Crystal Palace and then Tottenham Hotspur as a youngster, Madueke decided to step out of his comfort zone, like many young English players are doing these days, as opportunities to break into senior football, particularly in the Premier League, are becoming significantly more difficult.

After four years with Spurs, Madueke linked up with PSV’s Under-17s in 2018 and over the last three-and-a-half years he has slowly persevered and matured to get a taste of life in senior football.

Having gained some valuable experience with Jong PSV, the reserve side, the winger’s first-team breakthrough came in January 2020 in a 1-1 draw with VVV-Venlo. Last season, he established himself in the senior side and he continues to go from strength to strength in the Eredivisie. Having scored on his first start for the club in a 2-1 victory over Emmen in September 2020, Madueke finished the 2020-21 season with nine goals and eight assists in all competitions - an extremely impressive breakout year.

His form did not go unnoticed and in March last year, he received his first England Under-21 call-up in which he appeared in the European Under-21 Championships. 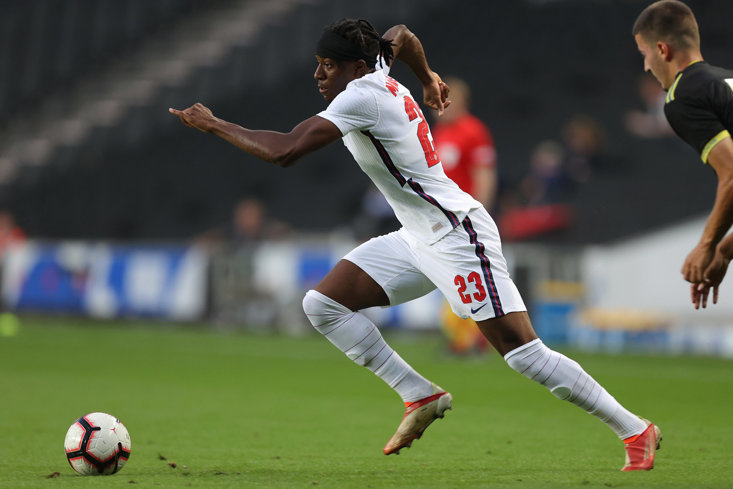 This term, the attacker got off to a great start, carrying over the momentum he built last season, as he scored twice in the 4-0 victory over Ajax in the Johan Cruyff Shield, which ended de Godenzonen’s 17-game unbeaten streak.

Madueke has since continued his impressive form in front of goal, as he has recorded eight in all competitions so far, including three in the Eredivisie and has put him in the bracket of some favourable company. After scoring in last weekend’s 3-1 victory over Heerenveen, the Barnet-born star has now scored 10 goals in the Dutch top-flight and has become only the third PSV player to do so as a teenager this century, behind Robben and Depay. Both these players have gone on to have exquisite careers at the highest level, particularly Robben, who was one of the most successful exports from the Netherlands to play the beautiful game.

With Madueke still yet to enter his 20s, he still has much to learn and develop to bolster his splendid natural talent but with the impressive mark he has already made on the continent, there will be many clubs across Europe keeping tabs on his meteoric rise.

For now at least, he is focusing on learning all he can at the Philips Stadion and he still has a title race to focus on, albeit with a five-point deficit between PSV and Ajax. He has years ahead of him in his career, so there is no need to rush. He is currently enjoying his football in the Netherlands and making a name for himself, which would suggest he is in no rush to move on.

Madueke is flourishing in Eindhoven and he’s the latest young English player to have a success story abroad. His ceiling continues to rise with each inspired performance and when the time comes for him to find a new challenge away from PSV, he will not be short on offers from Europe’s biggest clubs.