Football
News
The Reds won their second penalty shootout against Chelsea at Wembley in 2022
Simon Lillicrap
19:55, 14 May 2022

Kostas Tsimikas was the unlikely hero as Liverpool defeated Chelsea on penalties at Wembley for the second time this season, to secure a famous FA Cup win after another marathon battle in the capital. It was tight, it was tense. But it was always going to be.

These two clubs went all the way in the League Cup final after a 0-0 draw and it took extra-time and penalties to find a winner this time. All four games between these two sides this season have ended all square after 90 minutes, this was just the third FA Cup final to be decided via a penalty shootout and Liverpool came out on top, just as they did in 2006.

For Chelsea, and Mason Mount who missed a crucial penalty, they have now lost three FA Cup finals in a row while the England midfielder has lost six consecutive Wembley finals. This also means that with just three games remaining of their season, the Reds can still win the quadruple.

They need Manchester City to lose against West Ham tomorrow or Aston Villa on the final day to have a chance of winning the Premier League, while the Champions League is in their own hands, as they take on Real Madrid.

But they will be counting their walking wounded as Mo Salah, Virgil van Dijk and Andy Robertson were all forced off injured, which could seriously impact their run-in. Klopp will be delighted with the win, but his ‘mentality monsters’ will have to regroup ahead of their trip to Southampton on Tuesday.

Despite the goalless scoreline, this was a thrilling final with chances aplenty at either end. Luis Diaz, man of the match, was denied one on one with Edouard Mendy as he found all sorts of space in the opening moments and consistently caused Chelsea problems.

However, the Blues - strangely wearing yellow due to a Thomas Tuchel superstition - nearly got the opener. Reece James found space on the right and cut the ball back to Christian Pulisic, who saw his effort trickle wide of the post.

Marcos Alonso was then sent through by the American but he was denied by a sprawling Alisson before Liverpool suffered a blow of another kind. Salah went down off the ball and after having his thigh massaged, was replaced by Diogo Jota on the half hour mark. 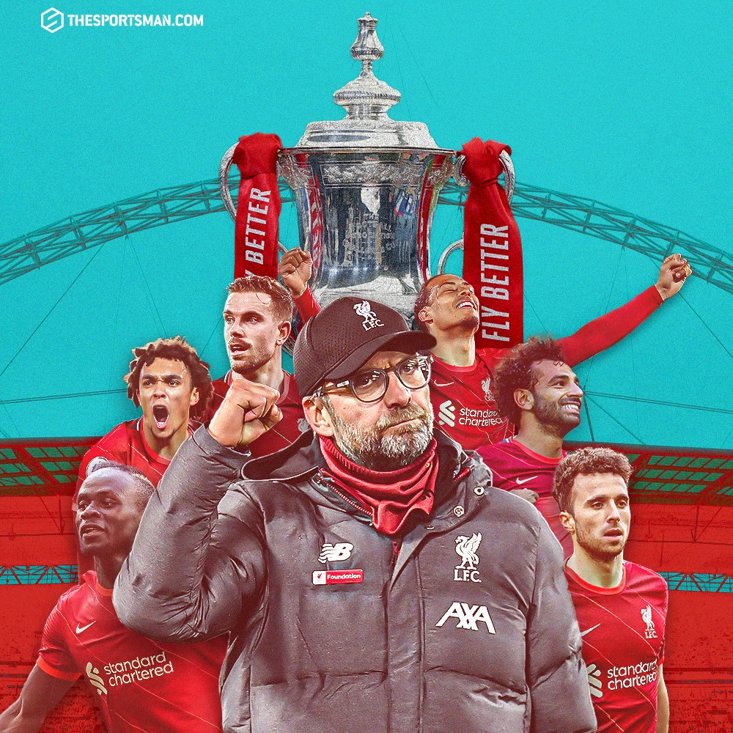 Liverpool regrouped and pressed on, with Andy Robertson playing a cross into Jota, but his touch from close range went well over the bar. It was a huge chance from a player who has 21 goals this season in all competitions.

Romelu Lukaku was causing issues for Liverpool, as he first was closed down by Van Dijk before powering a left-footed effort over from inside the box. Half-time saw the two sides go in level, just as they did in the League Cup final but Chelsea came out the brighter.

Alonso saw his effort go just wide, before Pulisic was denied by Alisson inside the box, both chances falling within the opening 90 seconds of the second half. After Reece James won a free-kick on the corner of the box, Alonso whipped in an effort that rebounded off the top of the Brazilian’s crossbar.

Liverpool were seemingly still in the dressing room as Tuchel’s men threatened to take the FA Cup away from the Reds. Jota and Diaz combined as the Colombian fired an effort just wide of Mendy’s post in retaliation.

Naby Keita fed Jota who drilled wide as the pressure increased from the Reds. Even on a boiling hot day at Wembley, Thiago was the coolest man in the building as he kept the ball up with his shoulder on the left-wing.

As the hour mark came and went it meant that these two sides had shared three hours of goalless football at Wembley this term, yet all of it had been utterly enthralling. Liverpool wasted a breakaway opportunity as Jota picked the wrong pass and then came close again as Mane fed Diaz who struck the edge of the post.

Moments later, Liverpool should have scored. Substitute James MIlner whipped in a wicked ball to Andy Robertson, who could only find the woodwork from close range. Trevoh Chalobah got a vital touch which flicked the ball onto his leg rather than than his boot, and that touch stopped Liverpool winning the game there and then.

Luis Diaz, the man who had ran Chelsea ragged, almost found the winner in added time as He outran Thiago Silva and curled one just wide of the post as the final went the distance. Virgil van Dijk went off injured at the end of 90 minutes as Jurgen Klopp counted the cost of going so deep into four competitions. 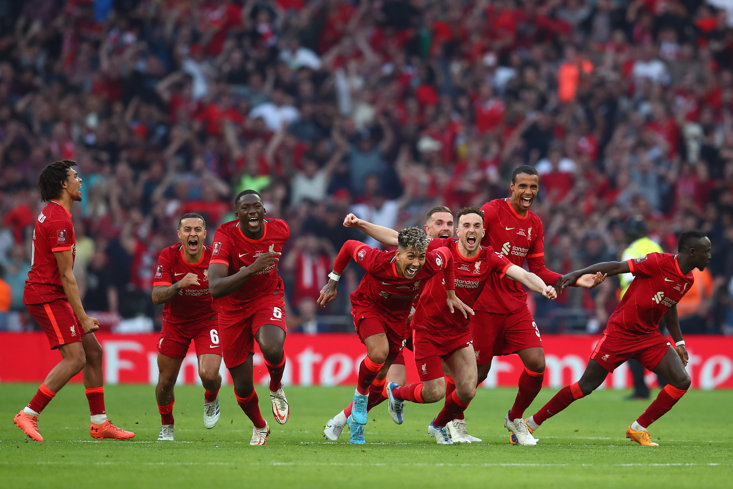 Ruben Loftus-Cheek, who came on at half-time in extra-time was bizarrely withdrawn for Ross Barkley ahead of a nervy penalty shootout, which took place at the Chelsea end. After successful spot-kicks from Alonso and Milner, Azpilicueta hit the post before Thiago scored to give Liverpool the advantage. Successful penalties from Reece James, Roberto Firmino, Ross Barkley and Jorginho gave Sadio Mane the chance to win the FA Cup.

Just as he did to send Senegal to the World Cup, and win the AFCON but his countryman Edoaurd Mendy got down to stop him in the most dramatic fashion. And so we went to sudden death.

Hakim Ziyech scored before Diogo Jota levelled under pressure. Mason Mount, who has now lost his last six Wembley finals, was then denied by a big save from Alisson before Kostas Tsimikas stepped up to win Liverpool the FA Cup. He was an unlikely hero, but FA Cup finals produce unlikely heroes.

The quadruple is still on. There’s two Premier League matches and one Champions League between this team and immortality - but they need Man City to slip up.