Queensland avoided the biggest series defeat in State of Origin history by salvaging Game 3 on Wednesday. The returning Ben Hunt was the hero, scoring two tries in a 20-18 win at Cbus Super Stadium in Robina following heavy defeats in the first two encounters.

Looking to avoid a first series whitewash since 2000, the Maroons finally managed to go toe-to-toe with New South Wales after 50-6 and 26-0 defeats which had meant that a Blues win would ensure the most dominant 3-0 series victory ever seen in Origin football.

And after Hamiso Tabuai-Fidow’s first-half try, it was Hunt who made the big difference with a pair of scores midway through the second stanza.

Following the concession of an early Valentine Holmes penalty, New South Wales were first to get over the line as Latrell Mitchell strolled through a huge gap in the Maroons’ defence to score. Queensland soon hit back to regain the lead though, with Tino Fa’asuamaleaui breaking through and teeing up Tabuai-Fidow to go over on debut.

As opposed to the opening two games, this one was a far tighter affair but it also became scrappy in parts as Queensland managed to knock the Blues out of their stride more often in the opening half than they had been able to in the first 160 minutes of the series combined. 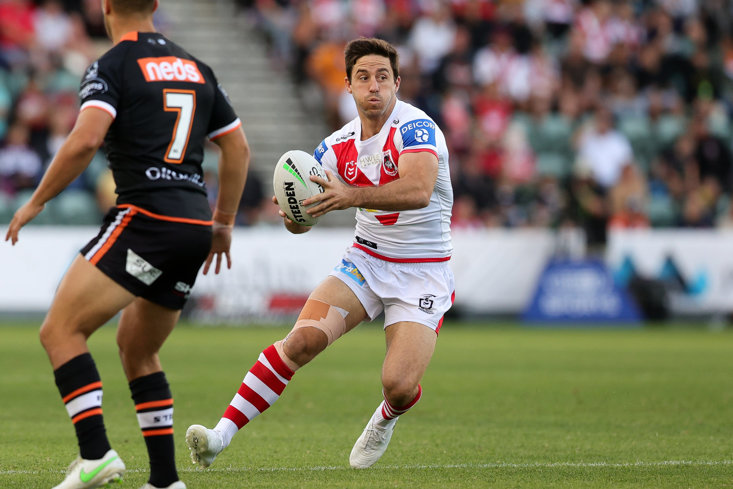 New South Wales retook the lead early in the second half when Canberra Raiders half-back Jack Wighton crashed over, with Mitchell converting to make it 12-8 Blues. But suspicions that they would finally start to take the game away from Queensland proved unfounded, with Hunt marking his first start of the series with a decisive phase of play.

The St George-Illawarra Dragons half, starting at hooker, darted through from acting-half to steal the lead back, and then he was over again within seven minutes to give the Maroons the first two-score advantage of the match at 20-12.

Apisai Koroisau teed up a dramatic finale by beating Cameron Munster to a bouncing ball and going over next to the sticks, and NSW had the chance to send the match into golden-point extra time with two minutes left on the clock as Mitchell was given the opportunity to kick for goal from a penalty on halfway.

But after a combined 22 successful attempts at goal on the trot from goalkickers in the series to that point, the centre’s attempt fell just short of the posts and Queensland were able to run out the ball and hold on to their two-point advantage to save some face after a largely forgettable 2021 State of Origin performance.