Jon Rahm clinched his first major title and became the first Spaniard ever to win the US Open with a magnificent final round of 67 on Sunday to outlast Louis Oosthuizen on a crazy day of golf at Torrey Pines in California.

Bogies on the 17th and 18th from 24 feet and 18 feet respectively proved vital as Rahm headed into the clubhouse with a one-shot lead over Oosthuizen, and the South African couldn’t find the extra kick he needed, with his bogey at the 17th meaning he needed an eagle on the final hole to force a play-off. His birdie on the 18th was therefore not enough to deny Rahm, who follows Seve Ballesteros, Jose Maria Olazabal and Sergio Garcia as only the fourth Spaniard to win a major of any description.

Just a couple of weeks ago, Rahm had had to pull out of the Memorial tournament after testing positive for Covid-19. He had ended the third round that day with a six-shot lead following a fantastic round of 64 which included a hole-in-one on the 183-yard 16th hole.

Now, he is the US Open champion after a stunning final round on a day when so many of the other contenders for the crown found ways to blow good positions. 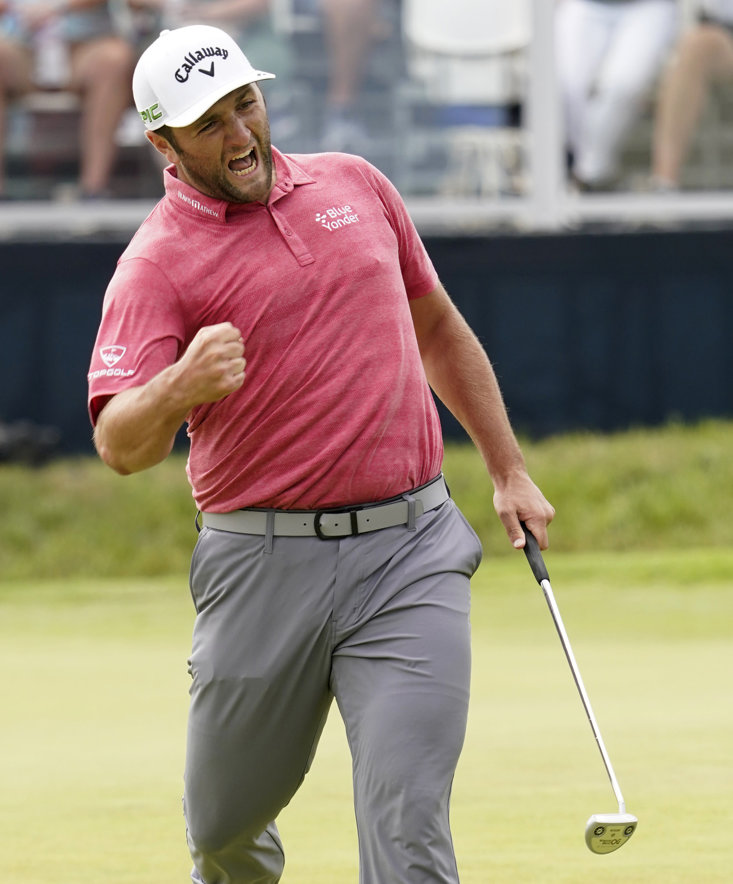 Reigning champion Bryson DeChambeau’s challenge was undermined on the back nine with bogies on the 11th and 12th, followed by a double-bogey seven at the 13th. His misfortune was compounded with a quadruple-bogey eight on the 17th as his tied-for-the-lead five under par became an ignominious +3 thanks to a final round of 77.

Elsewhere, Canadian Mackenzie Hughes was going well until seeing a drive land in a tree, DeChambeau had a ball land resting against a crate of beer and countless others missed fairways by some distance as multiple players struggled to cope with the pressure of staying in touch with the leading figures in a compelling day’s golf.

Rahm had started the day tied for sixth on two under par, with Oosthuizen sharing the lead with Hughes and American Russell Henley. But none of those who began ahead of him turned in rounds of even par or better, leaving Rahm to clean up with his monumental display.

Rahm collects $2.25 million for his historic success and becomes the world number one for the second time.

x
Suggested Searches:
Manchester United
Liverpool
Manchester City
Marcus Rashford
Premier League
More
golf
Golf's Sibling Superstars Minjee Lee And Min Woo Lee Are Taking...
On Sunday, Australian golfer Minjee Lee overturned a seven shot deficit to beat South Korea’s [ ... ]
golf
Unflappable Collin Morikawa Wins The Open Championship After...
American Collin Morikawa has won the Open Championship’s Claret Jug for the first time after a [ ... ]
golf
Oosthuizen Holds His Nerve To Take One-Stroke Lead Into Final...
Louis Oosthuizen proved once again that he should never be underestimated, as even with a subpar performance [ ... ]
golf
Louis Oosthuizen Makes Open Championship History As He Tightens...
Louis Oosthuizen tightened his grip on the Open Championship with another phenomenal round that saw [ ... ]
golf
Louis Oosthuizen Takes Clubhouse Lead On Day One Of The Open...
Day one of the British Open got off to an exciting start at Royal St George’s on Thursday, with [ ... ]
golf
Rahm, Koepka Or Spieth? Simon Dyson Analyses The Open Championship's...
The oldest golf tournament in the world gets underway tomorrow as the world’s finest players meet [ ... ]
golf
Rory McIlroy Looking To End Major Drought At The Open Championship
Rory McIlroy will be hoping to make some history at The Open this week as he looks to become the second [ ... ]
golf
Simon Dyson Predicts “Fantastic” Koepka Will Triumph At The...
Simon Dyson has predicted that Brooks Koepka will win the Open Championship at Royal St George’s.  [ ... ]
golf
Can Brooks Koepka Make It Three Wins From Four At The US Open?
He may have dropped to number 10 in the world rankings, but Brooks Koepka’s showing in the opening [ ... ]
golf
Money Grab Or Needed Reform? Premier Golf League Could ''Revolutionise''...
The much-debated proposal of a Premier Golf League worth £250million is “entirely feasible” [ ... ]
golf
PGA Championship: Phil Mickelson Makes History As Oldest Ever...
Phil Mickelson, at 50 years of age, has become the oldest ever winner of a major as he put in an incredible [ ... ]
golf
British Masters: Richard Bland Claims First European Tour Win...
Richard Bland has been playing golf on and off the European Tour since 2002 and has never won a tournament. [ ... ]
golf
British Trio Leading The Pack At Halfway In The Betfred Masters
We’ve reached the halfway stage of the Betfred British Masters and it’s been a ball-striking [ ... ]
golf
Everything You Need To Know About The 2021 Betfred British Masters
European Tour golf returns to the UK this week for the first time since October with the Betfred British [ ... ]
golf
There's Plenty Up For Grabs As The British Masters Returns To...
European Tour golf returns to the UK this week for the first time since October with the Betfred British [ ... ]
golf
Matsuyama Makes Masters History To Inspire New Generation Of...
Hideki Matsuyama has written his name into golf’s history books by becoming the first Asian player [ ... ]
golf
Masters Round-Up: Hideki Matsuyama Races Into Four-Shot Lead...
Hideki Matsuyama shot a 65 on Saturday to leapfrog Justin Rose heading into the final day of the Masters [ ... ]
golf
Justin Rose Leads The Masters As Defending Champion Dustin Johnson...
Heading into the biggest weekend in the entire golfing calendar, Englishman Justin Rose leads the way [ ... ]
golf
Masters Round-Up: Justin Rose Leads The Way As Tommy Fleetwood...
The opening day of the Masters was all about Justin Rose who opened up a four-shot lead after hitting [ ... ]
golf
2021 Masters Tee Times & Pairings - Thursday 9th April
The pairings for the opening two rounds of the Masters in Augusta have been drawn and now we know exactly [ ... ]
golf
The Masters: Jordan Spieth Ends Four-Year Winless Run Ahead...
It’s hard to believe Jordan Spieth’s Masters triumph was six years ago. Now 27, [ ... ]
golf
The Masters: Former Pro Simon Dyson Explains What It's Like...
The Masters returns this week as World number one Dustin Johnson looks to hold on to the Green Jacket. [ ... ]
golf
Westwood Back In The Top 20 After Runner-Up Finish At The Players'...
A magnificent second-place finish in the Players’ Championship this weekend has moved Lee Westwood [ ... ]
golf
Players Championship Can Provide Rory McIlroy With Much-Needed...
Spark. Mojo. Pizzazz. Whatever you call it, Rory McIlroy doesn't have it right now. When McIlroy [ ... ]
golf
Messages Of Support Flood In For Tiger Woods Following Serious...
The sporting world has rallied to send messages of support to Tiger Woods after the golf legend was [ ... ]
golf
Man, Megastar, And Mortal: The Book Examining The Second Life...
He’s the one name people who know nothing about golf, know about golf. But aside from the 15 Majors, [ ... ]
golf
Inside Michael Jordan’s Exclusive Golf Club, Where Drinks Are...
To the casual observer the Grove XXIII may seem like just another ordinary golf club in Hobe Sound, [ ... ]
golf
Caley Show That Buying Top Quality Golf Clubs Needn't Be Pricey...
A trip to the local golf course may seem like a distant dream for many of us, with the nation being [ ... ]
golf
The Best Gear And Gadgets To Get Your Golf Game To The Very...
“Confidence is the most important single factor in this game, and no matter how great your natural [ ... ]
golf
Flawless Colin Morikawa Is Golf’s Next Big Thing - But We Shouldn’t...
The world of golf witnessed one of the most remarkable feats in the sport’s history this weekend [ ... ]