Football
News
Considered a divisive character due to on-field misdemeanours, Morelos is unfazed by the criticism. He is a popular figure in the dressing-room and adored in the stands.
Graham Semple
17:00, 09 Feb 2022

Seven days ago, Rangers capitulated in a frenzied atmosphere at Celtic Park. The champions were hurried and harried from the outset, and they meekly responded to the challenge posed by their unrelenting rivals.

The absence of their talisman, Alfredo Morelos, was a significant blow. The Colombian’s presence would not have prevented the visitors from frittering away a two-point advantage, but his influence cannot be understated.

As Rangers toiled in the East End of Glasgow, Morelos was returning from international duty. The 25-year-old spent ten days in South America, missing three matches for his club, yet he did not feature once for the goal-shy Los Cafeteros.

His response to a fruitless jaunt home was emphatic – and he delivered a statement performance on Sunday in a 5-0 thumping of Hearts. Fine finishing earned him a double, but his industry and combination play were equally impressive.

Morelos has been revitalised under Giovanni Van Bronckhorst. He is the primary success story of the Dutchman’s reign so far, scoring eight goals in just ten appearances. The management team’s ability to communicate with him in Spanish is perhaps partly responsible for his upturn in fortunes.

The Colombian is often engaged in dialogue with Roy Makaay pre-match, and words of wisdom from a striker of his pedigree appear to resonate. He is a complex character benefiting from constant engagement, and his appreciation for the new coaching staff is evident on a matchday.

Morelos is flourishing in a more traditional centre-forward position again. Last season, the Colombian adapted his game to play a more withdrawn role. It was a subtle tactical tweak that worked for the team, but it was to the detriment of his goal-tally.

At the start of this season, Morelos was disengaged, overweight and lacklustre on the pitch. A shortened break following the Copa America did not aid his preparations for another long campaign ahead - and his relationship with Steven Gerrard did not appear to be as robust as it once was.

His lack of conditioning did not reflect well on his professionalism, and it was not the first time his commitment had been questionable. Maintaining optimum fitness is a prerequisite for any footballer, and doubts surrounding his dedication are likely why a move to a bigger league has not yet materialised. 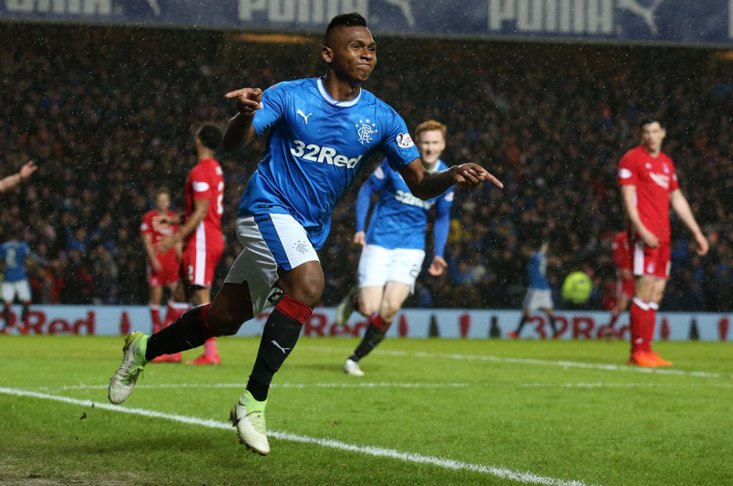 To his credit, Morelos has banished fears regarding his eagerness to lead the line for the Light Blues. He has not quite reached the form he displayed in the first half of the 2019/20 season - netting 28 goals by Boxing Day – but he is trimmer, sharper and back unsettling defenders like few can.

Morelos’ shortcomings have been well-documented. He is considered a divisive character due to on-field misdemeanours, yet he is unfazed by the criticism. He is a popular figure in the dressing-room and adored in the stands, especially by young supporters, and his contentment is evident in performances.

The current Rangers squad is filled with talent. They have an abundance of quality, but Morelos is the only irreplaceable performer. The 25-year-old has a bustling style that is highly effective; at home and abroad, and he is a unique centre forward in the modern game.

The Colombian has not been given enough credit for the impact he has made since arriving for a paltry fee from Finland four and a half years ago. He has netted 109 times in 213 appearances and also become the club’s top goalscorer in European competition.

Morelos has proved to be one of the wisest purchases in the last ten years. It seems inevitable that a club from a wealthier league will eventually take the plunge and offer him the chance to showcase his talent in a bigger market.

The Ibrox faithful would meet a summer departure with widespread sadness - but Morelos can soften the blow by firing the club he adores to the league title before contemplating future possibilities.

x
Suggested Searches:
The Sportsman
Manchester United
Liverpool
Manchester City
Premier League
More
football
England v USA Squad: Lucy Parker And Jess Park Earn First Lionesses...
Sarina Wiegman has recalled Fran Kirby and Euro 2022 final hero Chloe Kelly to the England squad, while [ ... ]
football
Jude Bellingham: Birmingham City Fans Knew He Was Destined For...
Across the whole of Europe right now, there is one player on everyone’s lips. Jude Bellingham [ ... ]
football
Out Of Time: The World Cup Is Arriving At The Worst Moment For...
World Cups are supposed to be in summer. They just are. But sometimes a break from tradition can be [ ... ]
football
Chris Wilder To Bournemouth: What's Gone Wrong For Wilder At...
It was set to be the match made in heaven, but now Chris Wilder is in the middle of a nightmare as the [ ... ]
football
Gareth Southgate's Eight Nailed On England Starters For The...
That’s it. All the warm-up games are now done and although England are now six without a win, [ ... ]
football
LIVE Football Blog: Final Day Of Nations League As International...
At long last, the international break comes to an end tonight with the final round of UEFA Nations League [ ... ]
football
Scotland's John McGinn Targets Nations League Promotion Amid...
He captained his country to two significant victories, earned his 50th cap and became Scotland’s [ ... ]
football
England 3-3 Germany: Southgate's Subs Lift The Mood As Goalscoring...
When Gareth Southgate’s England side were battered and bruised against the ropes, their nose bloodied [ ... ]
football
Why Do We Love Our Football Club - Part One: The Fans
In this five-part series, The Sportsman will be exploring one of football's biggest questions. Just [ ... ]
football
Long Live The Meaningless Friendly: Why The Nations League Has...
The dust has settled on England and Wales’ relegation from Nations League Group A. The ramifications [ ... ]
football
The Search For Harry Maguire: England’s Most Confounding Footballer
Harry Maguire is English football’s greatest enigma. Everyone has an opinion on what he is and [ ... ]
football
Watford Sack Manager Rob Edwards With Slaven Bilic Announced...
Rob Edwards has been relieved of his duties as Watford boss just 10 games into the Championship season. [ ... ]
football
Eric Cantona Offered To Become Manchester United's First President...
Legendary former Manchester United star Eric Cantona has revealed that he offered his services to take [ ... ]
football
Why Trent Alexander-Arnold Shouldn't Be In England's World Cup...
It’s the experiment that causes more debate than any other. But after being omitted from the England [ ... ]
football
LIVE Football Blog: England Host Germany In Final Game Before...
England return to Wembley tonight to compete in the Three Lions' final game of their Nations [ ... ]
football
Southgate Should Let Attackers Play With Freedom Against Germany
The mood surrounding the England national team isn’t great. We are less than two months away from [ ... ]
football
Missed Chances And Lewandowski Magic Relegates Wales
Wales have been relegated to League B of the UEFA Nations League after suffering a 1-0 defeat against [ ... ]
football
Chelsea Overcome Poor First Half Against Manchester City For...
Reigning Women’s Super League champions Chelsea are up and running this season as they defeated [ ... ]
football
Live Football Blog: Women's Super League + Wales Take On Poland
Good afternoon football fans! We've got Women's Super League action on the menu today as West [ ... ]
football
Grading Every Premier League Club So Far: A's For Arsenal, Fulham...
The international break is here and so what better time for Premier League clubs to take stock of their [ ... ]
football
LIVE Football Blog: All The Latest News From The World Of Football
Today we get our afternoon started with the Women's North London Derby between Arsenal and Tottenham, [ ... ]
football
What The 'Big Six' Premier League Managers Need From This International...
International breaks are strange times when you’re a club manager. At the top end of the Premier [ ... ]
football
Granit Xhaka: Arsenal Midfielder's Renaissance Is No Surprise
Arsenal have been a joy to watch. When was the last time we said that? Mikel Arteta’s side [ ... ]
football
Italy 1-0 England: Three Lions Relegated From Nations League...
England fell to another painful defeat to Italy which this time saw them relegated from League A of [ ... ]
football
Women's Super League Week 2: Arsenal Hammer Spurs In North London...
Arsenal 4-0 Tottenham Hotspur  The North London Derby at the Emirates Stadium didn't disappoint, [ ... ]
football
Brendan Rodgers Has Punched Above His Weight At Both Liverpool...
Brendan Rodgers is sleeping with a suitcase under his bed right now. It feels like this is the end game [ ... ]
football
Bukayo Saka Named England Player Of The Year For 2021-22
Bukayo Saka has been named as England’s Player of the Year for the 2021-22 season. The winger [ ... ]
football
England News: Pope, Henderson And Ramsdale Jockey For Pickford's...
England head into their upcoming international fixtures without Jordan Pickford. The Everton shot-stopper [ ... ]
football
Mourinho And Stormzy: Other Football Stars To Appear In Music...
Jose Mourinho: Managerial maestro. The man who became the first football coach to win the [ ... ]
football
Cost Of Living Crisis: Mansfield Town Become First Club To Move...
Mansfield Town have announced that their forthcoming home match against Walsall has been brought forward [ ... ]