During the last decade, the penultimate Old Firm match of the season has mattered little in the eventual outcome of the league championship. The winners have tended to be a distant speck on the horizon long before April, hence why the upcoming derby is one to be savoured.

Just three points separate the top two in their fraught battle for silverware and Champions League qualification. Celtic have a narrow advantage and can take a significant step towards glory with a victory, while Rangers are desperate to reignite their title charge.

Nerves are already jangling on both sides of the divide, and unbearable tension will grip Glasgow and beyond this weekend. Rangers have not lost a league match at Ibrox for over two years, and they will be desperate to start April, their biggest month since 2008, impressively.

The champions suffered a resounding defeat at Celtic Park in February. Tentative, passive and overwhelmed in a fiery atmosphere, the Light Blues lacked courage at the home of their arch-enemy. Giovanni Van Bronckhorst flunked his first derby test, and Sunday will demonstrate whether he has learned from a chastening experience.

Alfredo Morelos is expected to miss Sunday’s match after being pictured on crutches at Glasgow Airport on Thursday. The absence of the Colombian is a significant blow for the Ibrox club - especially with a Europa League quarter-final with Braga also just days away.

Kemar Roofe would be an obvious replacement for Morelos, and the Jamaican internationalist has looked sharp in recent appearances. The only other pressing selection quandary for Van Bronckhorst is whether to give Aaron Ramsey his full home debut. The Welshman’s late darting runs into the box could cause chaos, and he may be preferred to a weary-looking Joe Aribo. 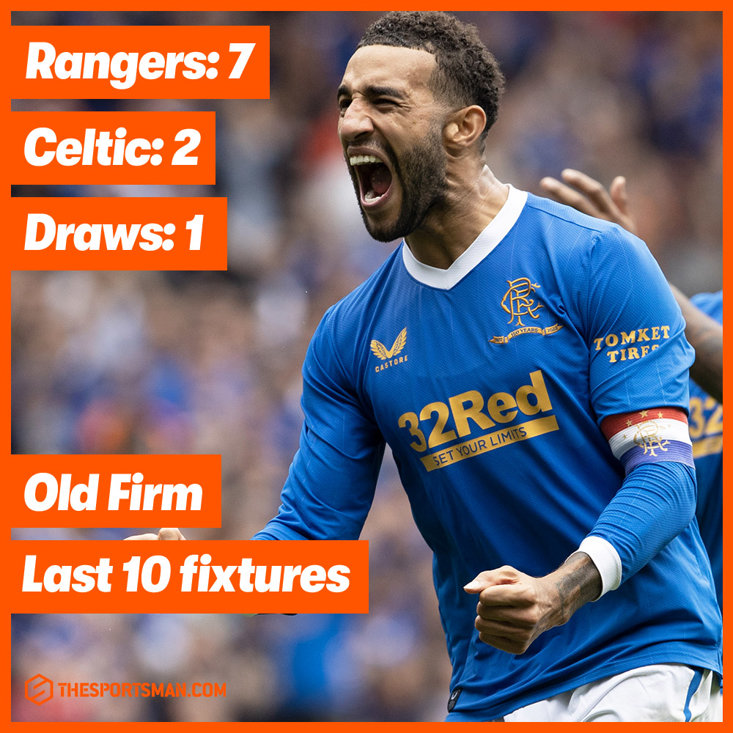 John Lundstram was widely viewed as a squad player just two months ago, his future uncertain, yet he has managed to elevate his performances and prove his worth. Assisted by the return to fitness of midfield partner Ryan Jack, the Englishman has, during European games, performed as a third central defender for prolonged spells - and his adaptability has been vital. The 28-year-old could perform a duel role again on Sunday.

Rangers' post-winter break slump has been damaging, especially considering Celtic have capitalised on every slip-up. The Hoops have won 21 of their last 24 league games and have remained unbeaten since mid-September. They spent months clinging to the coattails of their great rivals before eventually overhauling them - and they have not looked like relinquishing control since reaching the summit.

Ange Postecoglou has captivated the Celtic support with his expansive football and forthright views. The Australian inherited a depleted squad and a disenchanted fanbase, but he has united a fractured club - and his reward could be a domestic treble in May.

Celtic will not deviate from a winning formula. They will seek to disrupt and unnerve Rangers with their aggressive pressing and look to capitalise on any uncertainty. They are the top goalscorers in the league and will expect to find the net on Sunday, especially with Giorgos Giakoumakis in prolific form.

Reo Hatate enjoyed the spotlight following his derby brace in February, but Callum McGregor was equally as important as the Japanese. The Celtic skipper outfought and outworked his midfield counterparts - and he will expect to orchestrate proceedings from the engine-room once again. If the hosts fail to nullify the influential 28-year-old, the visitors will likely achieve the positive result they crave.

After much chopping and changing in the early part of the season, mainly due to teething problems and a raft of injuries, Postecoglou has finally established the nucleus of his preferred starting XI. Consistency of selection is vital, and Celtic are expected to make just one change from the side that thumped Ross County a fortnight ago.

If Rangers are to prolong the title race, they must produce their finest performance of the domestic season so far - otherwise, the visitors will depart Govan with one hand on the Premiership trophy.