Darts
News
'Barney' won the first leg in superb fashion, but could only notch three legs after that
Joey Mills
23:10, 23 Dec 2021

Darts is not as physically cruel to its legends as other sports, but the mental anguish of a decline should never be underestimated. Raymond van Barneveld felt its sharp sting on Thursday night, as he appeared crestfallen during a 3-1 second round loss to Rob Cross at the PDC World Darts Championship. ‘Barney’ played some truly superb stuff at times, in particular during a victorious first set, but it wasn’t enough in the battle of the former world champions.

The five-time world champion hit a 180 on his second visit, and the ‘Barney Army’ were roaring their approval. Van Barneveld treated the first leg like it was his throw, despite Cross having the darts. ‘Voltage’ knocked down a 180 in the second leg, but this only set the table for the Dutchman’s finest moment of the night. A 170 checkout with a sublime finish on bull handed ‘Barney’ the leg, and he opened the following leg with a 180. The iconic van Barneveld hit another 180, and took the set by hitting tops. The Alexandra Palace crowd came unglued, not for the last time during a pairing worthy of a final.

The 2018 champion started to fight back in the second set, breaking ‘Barney’ and then hitting a 180 and a 126 finish to take the second. The third brought the most terrific tungsten of the night, with Cross and then ‘Barney’ hitting back-to-back maximums. The 2007 winner would manage another 180, but Cross would level the match by hitting double 18.

A titanic third set saw both men racking up 180s galore, in a tremendously exciting, high-scoring set of darts unfolding. After splitting the first four legs, in hindsight the outcome of this match was decided in the fifth . Raymond van Barneveld spurned opportunities to take advantage of Cross’ worst throwing of the night, and he was visibly distraught when the Pembury man wrapped up the set.

He never really recovered, appearing to grow more emotional on every visit. After winning that magnificent first set, ‘Barney’ only won three further legs as Cross took control. After Rob Cross sealed the match, the legendary Dutchman could not even bear to face his opponent for a long time. Eventually, he turned round and sportingly embraced the victor. It is never pleasant to see a legend of a sport reduced in this way, and hopefully in the fullness of time Raymond van Barneveld can focus on the phenomenal match he treated us to here, rather than the result. 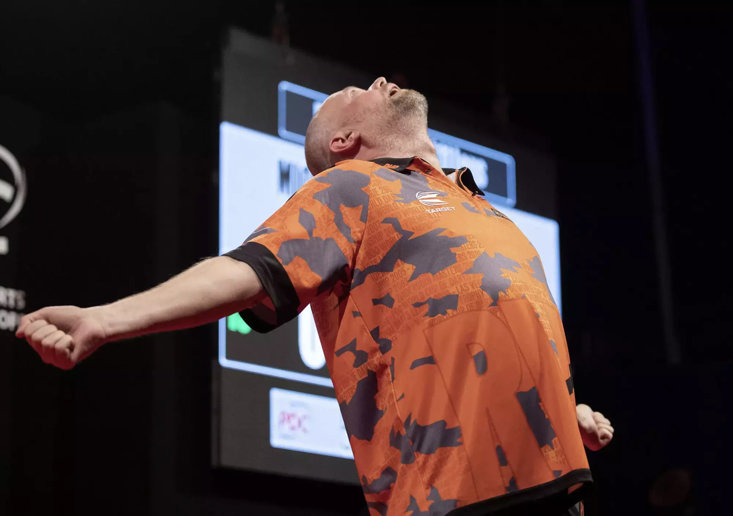 Gabriel Clemens might have taken a shortcut into the hearts of the Alexandra Palace faithful by walking out to ‘Wonderwall’, but there was nothing sneaky about his 3-0 win over Lewy Williams. ‘The Prince of Wales’ narrowly missed out on a 141 checkout in the first leg, missing double 12 and allowing Clemens to finish 68. ‘The German Giant’ made light work of the remaining legs, and put himself a set up in quick fashion.

Clemens’ trebles deserted him at the start of the second, but no sooner was Williams gaining a foothold when the world number 25 hit a 143 checkout followed by a 180 at the start of the following leg. A 140 and another 180 saw German assert himself on this second round match, and he took the second set.

The momentum continued in the third, as Clemens started it be breaking Williams’ throw. The Welshman had missed sixteen darts on doubles throughout the night, and once ‘The Giant’ smelled blood he was ruthless. Another pair of 180s punctuated the final set, with Williams showing signs of life pulling it back to 2-1 but losing the following leg. Clemens now moves on to a third round clash with another man from Wales, Jonny Clayton.

Danny Noppert booked a third round date with Ryan Searle, after a convincing 3-1 win over Jason Heaver. The Dutchman started well, hitting a one hand on his first visit, but his English opponent battled back to take the set. Noppert missed a crucial double-nine to take it to a deciding leg, and Heaver finished.

The world number 18 was more consistent in the second, with a 100 on his first throw and another 180 on his next. Heaver went close on a 126 checkout to take the first leg, but could only hit 120. A third 180 in the match from Noppert helped him take the fourth leg, and a pacy fifth went his way. Heaver could not buy any luck in the third set, having two darts bounce out on a potential 180, leaving 120 points sat on the floor of Ally Pally. Heaver missed two darts at tops to break Noppert’s throw, and never recovered as the former World Series of Darts finalist went within a set.

Noppert broke Heaver’s throw in the first leg, and once the Englishman’s luck deserted him with more darts coming out of the treble 20. 180s in the third and fourth sets underlined Noppert’s momentum, and he settled the match hitting double 10.

In the evening’s closer, Chris Dobey mounted a spectacular comeback against 20-year-old prodigy Rusty-Jake Rodriguez. ‘Hollywood’ was on the receiving end of six 180s before he notched his own, which did not arrive until the twentieth leg of the match.

Rodriguez racked up the first two sets, checking out with 88 and 90 respectively. A thirteen-dart leg in the third represented a paradigm shift in this second round tie, and after having set darts in the first two, Dobey finally got on the scoreboard.

From there, the 31-year-old drew level, before Rusty-Jake illuminated the decider with an early 180. The Austrian missed a finish on bull, and Dobey broke his throw to seize the momentum. From there, it was all ‘Hollywood’ as the world number 30 earned himself a third round tie with none other than Michael van Gerwen.