For the fifth time in ten years, Real Madrid are in the final of the Champions League. They have won the previous four finals they have entered, but they enter this year’s showpiece in Paris as underdogs. Los Blancos have not been to the final of this grand old competition since 2018, as the power has shifted towards English football. The Premier League has provided four of the last six finalists, and in Liverpool they offer up one of this year’s sides too. It is against this shifting landscape that Real have returned to challenge for a trophy they once dominated. But they haven’t got here by changing with the times, by becoming more “English”. They have done so by becoming more Real Madrid.

Manchester City and Liverpool occupy the cutting edge of modern football. Led by visionary tacticians in Pep Guardiola and Jurgen Klopp, the two sides have forged a new era of dominance in their domestic league. Liverpool won the 2019 Champions League, also reaching the 2018 final. City made it to last year’s final. Guardiola and Klopp’s methods have been validated time and time again. But while the old adage says “if you can’t beat ‘em, join ‘em”, Madrid’s revival has come through a radically different approach.

Rather than look into football’s future, Madrid have taken a few pages from the history books to fire them to their most successful season in a number of years. The La Liga title is already back in the trophy cabinet, and now Carlo Ancelotti’s side will take aim at the cup that they have held more times than any other club.

League success is all well and good, but everyone involved with Real Madrid knows that they are truly judged against their illustrious forebears in the Champions League. Thirteen times a Real Madrid captain has lifted Ol’ Big Ears above their head, and the Bernabeu walls almost demand the trophy like an old god demanding a sacrifice. It is a rich history indeed, and one Madrid have been inspired by this year.

There has been no tactical revolution, no sweeping embrace of a high-octane, pressing style. While Klopp espouses heavy metal football, Madrid are playing the hits. Manager Carlo Ancelotti is famous by now for his tactical neutrality. Returning for a second stint at the club, Ancelotti knows what the Champions League means in this part of the world. He lifted La Decima, Madrid’s tenth European Cup, in 2014. After a four year drought in the famed continental competition, Real turned to the man who delivered the dream. 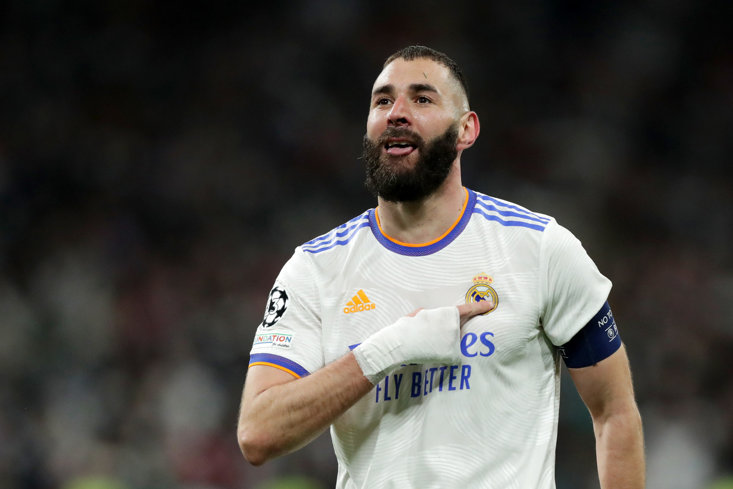 Ancelotti’s skills are not as a rigid, tactical idealist but as a man-manager. No current manager has so frequently knitted together star names and difficult characters into a cohesive unit. It is a task he has once again aced at the Bernabeu this season, taking a side picking up the pieces of the financial realities of the pandemic and forging them into something familiar. Something successful. The Italian has had help in this mission from another name that has illuminated Real Madrid’s past; Karim Benzema.

Of course unlike his manager, Benzema has not left the club and returned. The French forward has been at Los Blancos since 2009. But at the age of 34, he has enjoyed arguably the best season of his time in Spain. Always a reliable source of goals, the old stager has taken his game to another level this term. 15 goals in 11 Champions League appearances is a frankly frightening statistic indicative of a player who seems to be getting better with age. There is something very Real Madrid about relying on one of the superstars of the world game to fire you to a league title and a European final.

That isn’t to say there haven't been mammoth contributions from elsewhere. Many of those have come from others who are survivors of Carlo’s first Madrid stint, such as Isco and the eternal Luka Modric. But there has also been an injection of modernity through Vinicius Junior and Rodrygo. Like he has done so often, Ancelotti has proven adept at marrying together generations, styles and cultures.

If Real Madrid are successful at Stade de France on Saturday, they will have secured victory as only they can. This most unique of teams, the old money establishment super-club now competing in a world of oil money, won’t surprise anyone tactically. Coaching textbooks won’t recall what Real Madrid do on Saturday. But if Ancelotti, Benzema, Modric and the rest lift the trophy once more, the history books will.