Football
News
Liverpool fell to a painful 1-0 defeat in Paris as Carlo Ancelotti won his fourth title
Simon Lillicrap
22:40, 28 May 2022

Real Madrid have won the Champions League for the 14th time after a 1-0 win over Liverpool in Paris. The European behemoths needed a solitary Vinicius Jr goal to seal the title, which crowns one of the most remarkable Champions League campaigns that we have ever seen.

PSG, Chelsea, Manchester City and now Liverpool have fallen at the sword of Carlo Ancelotti’s remarkable side, who add this Champions League trophy to their La Liga title. In Paris, the city which has caused them so much heartbreak in recent weeks thanks to Kylian Mbappe, they showed yet again why they are the greatest club in the world.

Thibaut Courtois put in one of the greatest individual goalkeeping performances we have seen on this tage as he repeatedly denied Mo Salah with saves of increasing difficulty. He was an absolute colossus in the French capital, with his final save, one that tipped a powerful right-footed effort wide of the post drawing wild celebrations from his entire team. It was a career-defining performance, he was that good.

Once in front, something we haven’t seen much from Los Blancos during this tournament, they masterfully saw out the game, with Toni Kross and Luka Modric keeping the ball safe as if it was a newborn child. Liverpool were the better side and created so many chances, but when the defence was beaten, their rock-solid goalkeeper was not.

Real Madrid are always glamorous, but this is not the exciting Cristiano Ronaldo led version that we saw four years ago. Instead they are gritty, fight for each other and most importantly, never know when they are beaten. This time they didn’t need to come from behind, but instead they shut out one of the finest attacking teams in the world.

Carlo Ancelotti has worked his magic again in this competition. The man who has now lifted this trophy four times, twice with Real Madrid is now the most successful manager in the history of the competition. His work cannot be understated at the Santiago Bernabeu, while Karim Benzema, quiet in this final, is now surely going to win the Ballon d’Or.

There was a grey cloud over this final however. Once again poor organisation from UEFA caused crowds outside, with several gates closed for no reason, and fans forced through dangerous bottlenecks. Kick-off was delayed, fans were stuck outside, getting pepper-sprayed by French police, and yet Camila Cabello did her pre-match show. 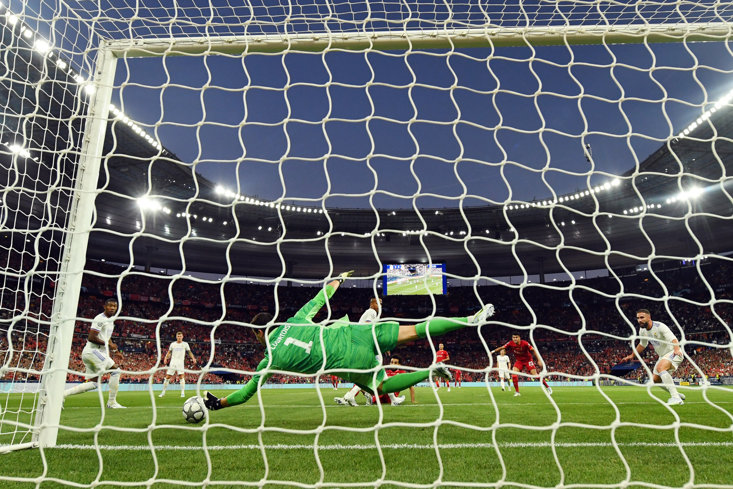 This chaotic pre-match just summed up UEFA. Fireworks went off inside the stadium, while fans were being treated abysmally outside, with reports that some supporters were jumping fences in order to get into the stadium. The opening was a sombre affair as those on the pitch and in the stands struggled to come to terms with the events outside.

Courtois won his first battle as he got down to deny a Salah flick, but Liverpool started the game well, exerting control over possession. The Egyptian stung the palms of Courtois again soon after, but Real Madrid were happy to play on the counter-attack.

Sadio Mane thought he had scored the opener as he struck a fierce low effort towards goal but the big Belgian pulled off a remarkable save to tip the ball onto the post and deny the Senegalese forward.

Benzema bundled the ball in with Madrid’s first real opening of the game, but after a long wait, he was given offside by VAR. Fabinho did not deliberately play the ball to the French striker and as a result, he cannot be onside, despite online confusion.

After the break however, Real Madrid would go in front. Federico Valverde, sensational throughout, fired a deadly pass across goal and Vinicius Jr was there to tap home to stun Liverpool. Against the odds, it's what they have done all season in this year’s competition, and they led in Paris.

Courtois denied another curling Salah effort before Diogo Jota’s introduction gave the Reds further impetus. He headed one across goal to Salah but the Belgian giant was there again to deny the Egyptian. He was there again to stop Jota, before Salah brought the ball down wonderfully and drove a right-footed effort towards goal, which Courtois yet again flicked past the post.

It was an individual battle that Salah simply could not win. And this was a title that Real Madrid fully deserved. The Champions of Europe. 14 times.