The clouds lifted over Old Trafford on Wednesday night, as Manchester United defeated Nottingham Forest 3-1 to lift the FA Youth Cup. In United’s worst season since arguably 1988-89, there has been very little for supporters to smile about. While no fan would pretend this triumph has redeemed a campaign spent in the doldrums, inside Old Trafford the sense of catharsis was palpable. A trophy had been secured, and while it pales in comparison to the prizes Liverpool and Manchester City are duking it out for, it is one that means a lot in these parts.

The Red Devils first lifted the FA Cup’s junior counterpart in 1953, before winning the following four consecutive finals. The core of this side would become the feted Busby Babes, with club icons like Bobby Charlton and Duncan Edwards featuring in finals before stepping up to the first team. Tragically, many of the Babes were lost in the Munich Air Disaster of 1958. A generation of the most accomplished footballers wiped out in one heartbreaking fell swoop.

United would lift the cup again in 1964, with a young Irishman by the name of George Best scoring in the two-legged final. United would reach two finals in the 1980s, but like the first team they faltered between the 1960s and the 1990s. Of course the story of how they ended their FA Youth Cup drought is well-told. The United youth side of David Beckham, Ryan Giggs, Paul Scholes, Nicky Butt and the Neville brothers is called ‘The Class of ‘92’ for a reason, owing to the fact that set-up lifted the trophy that year. There would be three more wins in the years Sir Alex Ferguson was in charge of the senior team, with a side featuring current squad members Jesse Lingard and Paul Pogba lifting the cup in 2011.

Given how many star names from these squads have gone onto feature for the United first team, the exciting thing for fans now is picking which of the 2022 crop could kick on. Alejandro Garnacho certainly staked his claim at Old Trafford in the final. The highly-touted Argentine scored United’s second from the spot, though it must be pointed out that the foul leading to the penalty had occurred just outside the area. Even for the biggest youth games, VAR is nowhere to be seen. Garnacho added a superb solo second, slaloming through the Forest defence to slam home. It was a star-making display from a player who has already featured for Ralf Rangnick’s side this season. 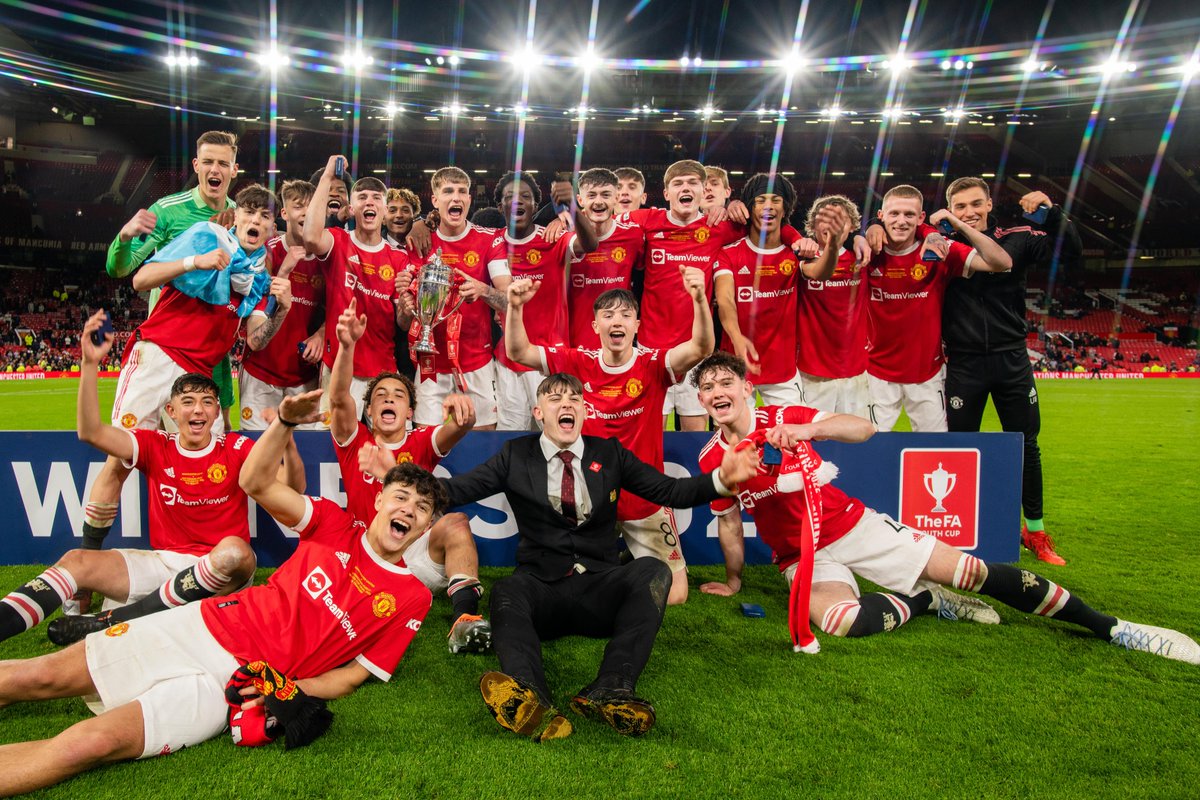 Central midfielder Kobbie Mainoo is another talent who sets the pulse racing. An all-action presence in the middle of the pitch, the 17-year-old tackles with authority and passes with creativity. Former Sunderland youngster Joe Hugill made a telling contribution when he came on, executing the number 9 role with a comfortingly old-school flair. Playing with his back to goal and holding up play like an old bro. Hugill looks wise beyond his years.

La Masia graduate Marc Jurado conjures images of Rafael at his most thunderous. Cajoling teammates with a fist to the chest, pumping up the crowd at every turn and showing a lovely line in touchline-hugging ferocity; this kid has balls. Captain Rhys Bennett opened the scoring with a well-taken header, and made telling contributions at the other end too. His fine defensive display aside, his role in leading his teammates over to Radek Vitek to console the goalkeeper after his soft concession of Forest’s goal was admirable.

For one night, United felt like a club renewed. The atmosphere was helped by the crowd of over 67,000 being in such fine voice. The £1 tickets meant that you saw a different clientele than you often do at the famous old ground. The cynical adults stewing over the club’s often-pathetic displays this season gave way to a huge number of kids. Many were attending their first game and were vocally enthused to be watching live football. There was optimism in the stands, and reasons to be optimistic on the pitch.

The realities of youth football and the huge step-up to the professional men’s game dictate that, for a lot of these players, this will be as good as it gets at United. But last night’s cup winners can be heartened by how many of the 2011 side have made a fine living in the professional game. While Pogba and Lingard, as well as Harry Maguire from opponents Sheffield United, have all made over 100 appearances for the first team, others moved on to have successful careers elsewhere.

Sam Johnstone and Michael Keane are England internationals. Ravel Morrison, thought to be the best of the bunch, has endured a nomadic experience but has proven himself this season at Derby County after spells with the likes of West Ham United. Will Keane was the top scorer in League One this season, firing Wigan Athletic to the title. Ryan Tunnicliffe and Tyler Blackett have both played over 100 EFL games. While not every player will take the Pogba route to untold riches and World Cup success, there is no reason why the majority can’t enjoy good careers in the game.

But in the afterglow of the success, United fans will be hoping to see some of these players get first team chances. Garnacho certainly deserves to add to his substitute appearance against Chelsea last month and others will likely follow. Incoming manager Erik Ten Hag, who secured the Eredivisie title for Ajax as this final was being played, will be unable to address every problem position at United in one window. At least now he knows there are young players who can be relied upon to fill the gaps.