Anthony Joshua looked bereft of ideas as Oleksandr Usyk boxed, moved and pounded his way to a unanimous decision on Saturday night. The Tottenham Hotspur Stadium crowd saw Joshua lose his heavyweight titles for the second time, and this felt like a more raw exposure of his failings than the last one. In 2019, Andy Ruiz Jr stopped Joshua through sheer force of will. It was one of those sort of results that can happen to even the greatest boxers. It carries echoes of Leon Spinks outsourcing Muhammad Ali, Mike Tyson coming unstuck against James ‘Buster’ Douglas and Lennox Lewis being levelled by Hasim Rahman. But the Usyk defeat was a more troubling one.

‘AJ’ was carefully, cutely outboxed. His greatest weapon, that shattering right hand, was disarmed. The Ukrainian’s lateral movement had Joshua chasing shadows, and he looked worryingly confused for a fighter with 11 world title fights under his belt. This was the sort of defeat that leaves a permanent mark on a boxer’s psyche. Anyone can get knocked out, but to have your entire boxing philosophy proven wrong in this manner is galling. Now would be the opportune time to overhaul that strategy, and logically that starts with the trainer.

I cannot stress enough that Joshua’s cornerman, Rob McCracken, is a wonderful trainer. His work as GB Boxing performance director saw this country land five medals at London 2012. In the professional ranks, he led Carl Froch to the top of the pile at super middleweight. McCracken has also trained his former Olympic protege Anthony Joshua from day one, and deserves immense credit for guiding him to the WBA, WBO and IBF world championships. But oftentimes, no matter how good a trainer is, their fighter becomes too comfortable with them. Old habits die hard, and sometimes a boxer needs fresh ideas to become the best version of themselves. 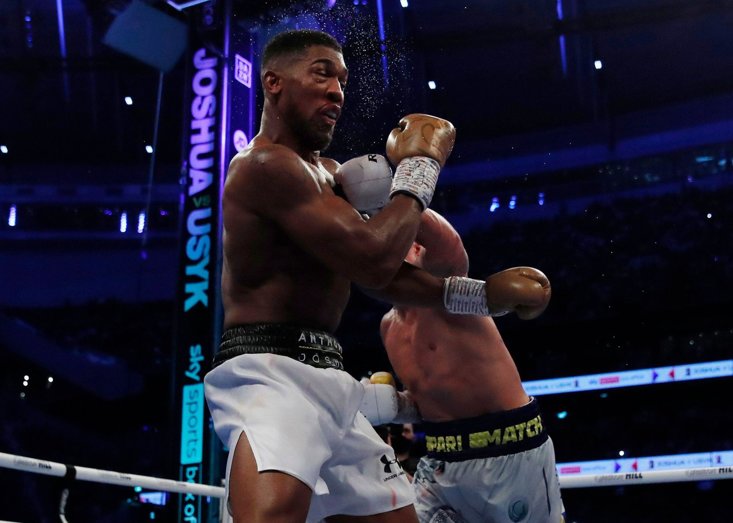 There is precedent for heavyweight champions changing trainers after chastening defeats. In fact, the two greatest examples of this changed to the same trainer, the legendary Emanuel Steward. The master trainer at the Kronk Gym reshaped the careers of Lennox Lewis and Wladimir Klitschko after they had been dethroned. He took the reins for Lewis after a fighter he trained, Oliver McCall, had knocked out the British fighter for the WBC title. For Klitschko, stoppage defeats to Corrie Sanders and Lamon Brewster were the catalyst for a backroom reshuffle. In both cases Steward made the fighters more defensive, adapting their styles to protect chins that had been exposed. He also gifted both with strong jabs, around which they built styles that took them to dominance.

Sadly Emanuel Steward is no longer with us, but there is no shortage of trainers who could reset the ‘AJ’ machine. The great Freddie Roach has form in this area, having taking over Amir Khan’s training after his first-round KO loss to Breidis Prescott. Roach took Khan from his lowest point to two world title wins, turning the fighter into a more polished boxer in the process. Buddy McGirt is also a great option, already proving his worth in helping Callum Smith rebuild from the Saul Alvarez defeat.

Ignore the armchair pugilists and Twitter reactionaries, Anthony Joshua is far from finished. You do not win, unify, defend and reclaim a world heavyweight championship without being a top class boxer. But he is a boxer in need of guidance, and after the Ruiz and Usyk defeats, Rob McCracken may no longer be the man to give it to him. Joshua is in possession of tremendous gifts, in particular his concussive power. But ‘AJ’ needs to polish his work, and adapt defensively to fighters who can out-speed and overwhelm him. In order to do this, he needs a new trainer.

x
Suggested Searches:
Manchester United
Liverpool
Manchester City
Marcus Rashford
Premier League
More
boxing
Weekend's Boxing Provides A Fight Of The Year And Upset Of The...
An Upset of the Year contender, a Fight of the Year contender and a big night in Newcastle for British [ ... ]
boxing
On This Day In 1987: Tyson Brings The 15-Round Era To A Brutal...
On this day in 1987, boxing changed forever, as the last ever 15-round world heavyweight title fight [ ... ]
boxing
Brawl On The Tyne: Fury, Marshall And Chris Eubank Jr Descend...
Unbeaten Savannah Marshall makes the second defence of her WBO middleweight championship this Saturday [ ... ]
boxing
Mixed Week For The Eubanks: Five Boxing Stories You Might Have...
Boxing never sleeps, and with Fury-Wilder III in the rearview, attention has turned to exciting fights [ ... ]
boxing
Haye At 41: The World Title Wins That Defined ‘The Hayemaker’
Former two-weight world champion David Haye turns 41 today. ‘The Hayemaker’ is unfairly [ ... ]
boxing
''You Big, Stiff Idiot!'': The Wit And Wisdom Of Tyson Fury
Not content with being the most able heavyweight fighter on the planet, Tyson Fury is also a supreme [ ... ]
boxing
The King’s Gambit: Who Should Tyson Fury Fight Next?
‘The Gypsy King’ has the world at his feet after solidifying his claim to the throne with [ ... ]
boxing
Retirement Or Fight His Way Back: What Happens Now To Deontay...
Deontay Wilder’s stock amongst the boxing community managed to both rise and fall on a damaging [ ... ]
boxing
Tyson Fury Retains Heavyweight Titles In Incredible Trilogy...
The first fight was a resurrection. The second was a demolition. Tonight, Tyson Fury’s 11th-round [ ... ]
boxing
LIVE Tyson Fury v Deontay Wilder 3
Morning all! What are you doing up at this time? It's Tyson Fury v Deontay Wilder. Again! The WBC [ ... ]
boxing
Merseyside Derby: Experienced Smith Awaits For Hungry Fowler
Liam Smith takes on Anthony Fowler this Saturday in a battle for Liverpool supremacy. The former world [ ... ]
boxing
Whyte Lined Up For Fury/Wilder Winner, Five Boxing Stories You...
Ahead of a blockbuster weekend in boxing in the ring, it’s been a pretty busy week out of it. [ ... ]
boxing
The Man Who Beat The Man: Tyson Fury On The Lineal Championship
When Tyson Fury walks to the ring to face Deontay Wilder on Saturday night, he will have two belts in [ ... ]
boxing
Fury vs Wilder III Undercard Preview: Heavyweight Heaven In...
It’s heavyweight heaven this weekend in Las Vegas as not only will fight fans be treated to Tyson [ ... ]
boxing
“I Look At Deontay Wilder Like He’s Stupid” - The Tyson Fury...
“Boxing is not rocket science. It’s me going in there, punching a man's face in. That's [ ... ]
boxing
Happy Birthday, Micky Ward: Remembering The Gatti War That Launched...
The word warrior is thrown around so readily in boxing, it has lost some of its impact. While every [ ... ]
boxing
Liam Smith vs Anthony Fowler: Everything You Need To Know
There’s a monster match-up on Merseyside this weekend when Liam Smith and Anthony Fowler go head-to-head [ ... ]
boxing
On This Day In 1998: Floyd Mayweather Wins First Ever World...
“We believe in our heart of hearts that Floyd Mayweather is the successor in a line that starts [ ... ]
boxing
Undercard? When? How To Watch? Everything You Need To Know About...
Tyson Fury and Deontay Wilder go head-to head for a third time next weekend, with The Gypsy King’s [ ... ]
boxing
UK First Choice For AJ Vs Usyk Rematch, Five Boxing Stories...
There’s news on where Anthony Joshua’s rematch with Oleksandr Usyk could land, a modern [ ... ]
boxing
My Name Is Prince: 26 Years Since Naseem Hamed Won His First...
26 years ago today, a Prince was crowned king. ‘Prince’ Naseem Hamed stopped Wales’ [ ... ]
boxing
Eubank Statement: Junior Can Be The Face Of Sky Sports Boxing
Chris Eubank Jr takes to the ring this weekend as the new crown jewel of Sky Sports’ boxing coverage. [ ... ]
boxing
Keep Moving Forward: How ‘AJ’ Can Learn From Lennox The Avenger
Anthony Joshua, the dethroned three-belt king of the heavyweight division, sat stoically in the post-fight [ ... ]
boxing
Oleksandr Usyk Puts In Boxing Clinic Against AJ To Take Heavyweight...
You’d be forgiven if you’re starting to grow a little weary of hearing ‘Sweet Caroline’ [ ... ]
boxing
Okolie Cruises To Victory In First World Title Defence On AJ...
The first defence of Lawrence Okolie’s WBO cruiserweight crown ended swiftly on the undercard [ ... ]
boxing
The Rebuild Begins For Callum Smith As He Steps Up To Light...
Callum Smith was the best super middleweight in the world. The Liverpool fighter was the latest outstanding [ ... ]
boxing
Anthony Joshua Weighs In 19lbs Heavier Than Usyk Ahead Of Heavyweight...
Anthony Joshua has weighed in at 240lbs ahead of his heavyweight showdown with Oleksandr Usyk this weekend, [ ... ]
boxing
Okolie Is The Latest In A Proud Line Of British Cruiserweight...
Anthony Joshua will not be the only British world champion stepping into the ring at the Tottenham Hotspur [ ... ]
boxing
Anthony Joshua vs Oleksandr Usyk Is Fight Of The Year, Says...
Ahead of Oleksandr Usyk’s heavyweight showdown with Anthony Joshua at the Tottenham Hotspur Stadium, [ ... ]
boxing
From Mike Tyson To Mr. Dream, How Punch-Out!! Defined Boxing...
Only 55 men truly know what it is like to face ‘Iron’ Mike Tyson. But a generation of gamers [ ... ]