It is now 33 years since Red Bull sold its first ever energy drink. Pre-April Fool’s Day 1987 the world had to exist without the Austrian company supplying their wings.

Today it is a $10billion company that hasn’t just cornered the energy drinks market but they themselves continue to set their sights on soaring the sporting heights. The past two decades has asserted them as a major player in the global game of soccer. But now, if their ever-advancing, cutting-edge training facility in Liefering is anything to go buy, Red Bull are planning on becoming the major player.

Red Bull have been competitive in Formula One since blazing with four back-to-back World Championships in the early 2010s, have helped launch a man back from the edge of space, backed numerous athletes of various avenues, and up until 2014 had control of football teams on four continents.

The energy drinks giant’s football odyssey began with their first takeover of Austria Salzburg in 2005, a 70-year-old team who played in violet and white.

With the acquisition, it was subsequently rebranded FC Red Bull Salzburg with a brand-new crest - incorporating the recognisable logo of the two red bulls butting heads in front of a gold spot - and the colours changed to white and red, a staple now of all Red Bull clubs.

Now, a stone’s throw away from their home stadium at Wals-Siezenheim, on a 12,000 square-metre site, 200 specially-selected young footballers from seven countries across 11 teams are trained by 120 specialist employees at the 22nd Century, state-of the-art Red Bull Academy.

Three years after its doors opened in 2014, their Under-19s trained at the facility, were crowned UEFA Youth League champions. In the 2017/18 Europa League campaign, the FC Red Bull Salzburg first-team reached the semi-finals of the competition with six academy graduates from their education program.

Above the main entrance is the sign, 'Enter the next level'. It certainly lives up to its declaration, with Red Bull recently allowing a glimpse behind the curtain.

The cutting-edge training facility lies in Salzburg's Liefering neighbourhood and is demonstrating that Red Bull’s project - despite its respectable successes so far - is still in its infancy: exceptional and exemplifying that their stranglehold isn’t going to relax any time soon. Red Bull are gazing into the future and bringing it into the present. 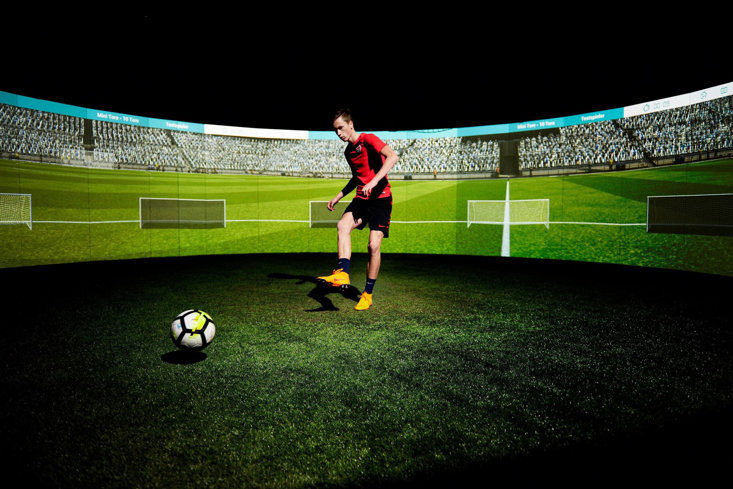 It is a project that has already been curiously investigated by sides from the German Bundesliga, Spanish La Liga, and Champions League holders Liverpool.

That is only the tip of the iceberg.

The consistent monitoring with a variety of training exercises are stored in an extensive database, meaning that a player's performance progress can be tracked over several years, perhaps even gauging future success. It’s not beyond the realms of possibility that data of certain alumni will be imperative.

Programs are tailor-made for every trainee professional footballer, with individual workouts produced by the date collected. The individual logs into their regime via tablets, as well as compare their performance with team-mates in their particular room.

The 1080 Sprint device illustrates the advancement in training exercises.

"Our lads have to be extremely fast - that's what our game system is designed for. And in modern football, 90% of all sprints are no longer than 20 metres," Manfred Pamminger, CEO of FC Liefering, explained. 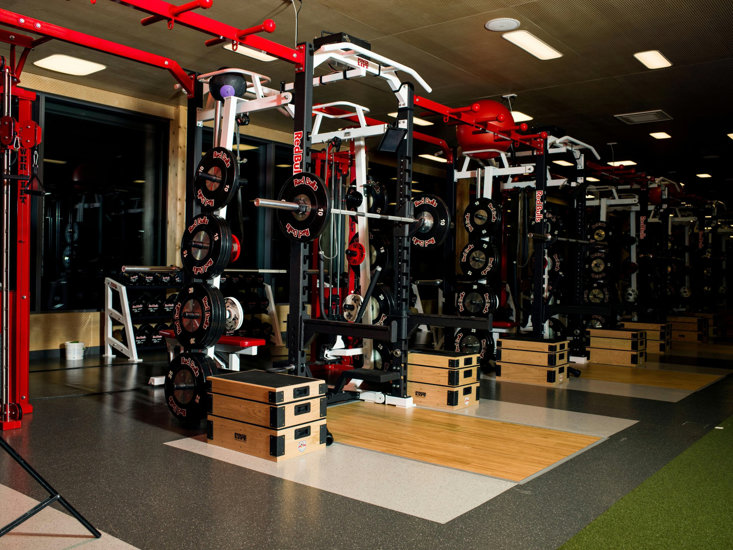 There is even an anti-gravity running track - the AlterG - so high-tech that it was originally developed for astronauts training for space travel. The purpose is to help build up recovery time in an injured athlete.

"On the track, the player wears airtight trousers with an air chamber that reaches to the hips,” Pamminger explains, “A blower creates pressure in it, which reduces the body weight by up to 80 per cent."

In place of water-treading regeneration, the running track has tilt simulation up to 15 degrees, a reverse running program and a top speed of 19kph.

The SoccerBot360 exercise forces the players to boost their brain power, tuning their head with their feet.

With the player placed within the centre of a large sphere, six projectors display computer images on a wall, with small goalposts the player has to hit with passes under time pressure.

"The boys have to learn to think faster, process quicker and train their gaze behaviour," said Liefering’s head of match analysis and innovative projects, Alexander Schmalhofer.

As they are undergoing the exercise, a high-speed camera tracks how quickly, sharply and precisely they pass the ball. Players and coaches have the opportunity to replay the footage. The date is, of course, consequently collated. 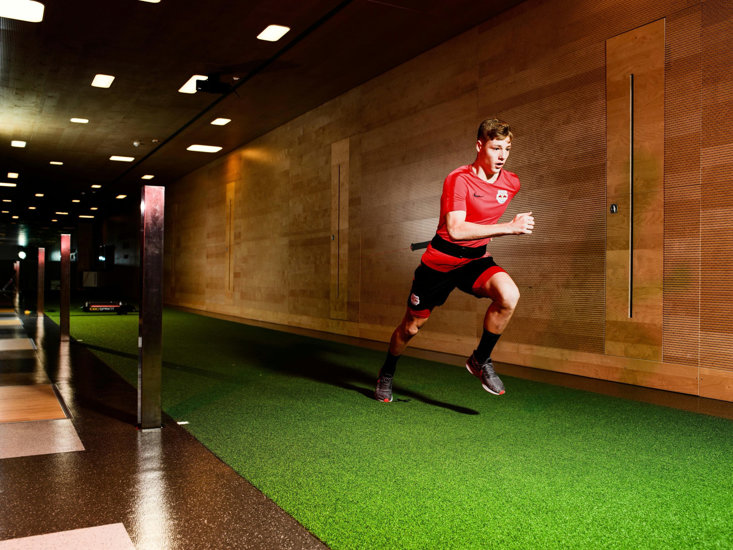 The LPM system, Red Bull declares, is ‘the most accurate sports tracking system in the world’. 100 times more precise than GPS, it collects the position data of all players and the ball on the pitch inside the 6,000 square-meter hall 25 times every second via eight base stations. That’s more than three million raw data points in 90 minutes. Biometric data is also collected with the system, including players' heart and breathing rate, or skin temperature.

With the illuminating investment in Liefering that is becoming the envy of long-standing football institutions across the constitution, one thing is becoming vehemently clear: Red Bull is certainly intent on giving these future superstars their wings.