Everton still have work to do if they are to remain a Premier League club. After a bright start against Brentford, two red cards and a series of defensive errors saw them pegged back 3-2 by Thomas Frank’s bright’ Bees. A victory for Frank Lampard’s side would have seen them secure survival, but a thrilling Sunday evening collision swung Brentford’s way.

With Everton able to secure their Premier League status, the atmosphere at Goodison Park was deafening. Players on both sides seemed to feed off the cacophony in a dramatic first period. The Toffees nearly sent those fans into raptures early. A Dominic Calvert-Lewin flick-on saw an Anthony Gordon shot saved before Richarlison headed the rebound wide of an empty net. The forward claimed Rico Henry had fouled him but it was an empty claim.

Everton took the lead soon after, with the same trio combining for the opener. Gordon whipped a free kick into the box. Brentford failed to clear their lines and Richarlison’s touch towards goal was chested in by Calvert-Lewin. Richarlison was initially awarded the goal, before Calvert-Lewin’s involvement was made clear on the replays.

With Everton ebullient, it looked like this would be their afternoon. But a clumsy intervention from Jarrad Branthwaite turned this game on its head. The defender tried in vain to chase down Ivan Toney, messily bringing the striker down. Everton wanted a penalty for a tug on Richarlison earlier in the move, but that was denied. Instead, Branthwaite was dismissed. Christian Eriksen went close on the resulting free kick, as the tide began to turn.

Brentford made the advantage count through Yoane Wissa. Mathias Jensen’s clever pass set the DR Congo international free and he dispatched from the tightest of angles. His cross-shot hit Seamus Coleman on the way in, but they all count. Like the Calvert-Lewin strike, this was later attributed to Coleman, but Wissa’s work was superb to engineer the goal.

This frenetic half of football had one last twist in the tail. Mads Bech Sorensen clumsily barrelled into Richarlison in the box, giving away a penalty. The Everton players, perhaps motivated by their own reduced number, lobbied for further punishment but a spot kick was the only award. Richarlison put it away with a relaxed, stuttered run-up to keep the Toffees’ survival hopes well and truly alive.

Sky Sports Premier League
@SkySportsPL
As cool as you like from Richarlison! 🥶
10-man Everton retake the lead just before half-time! ⏱️ 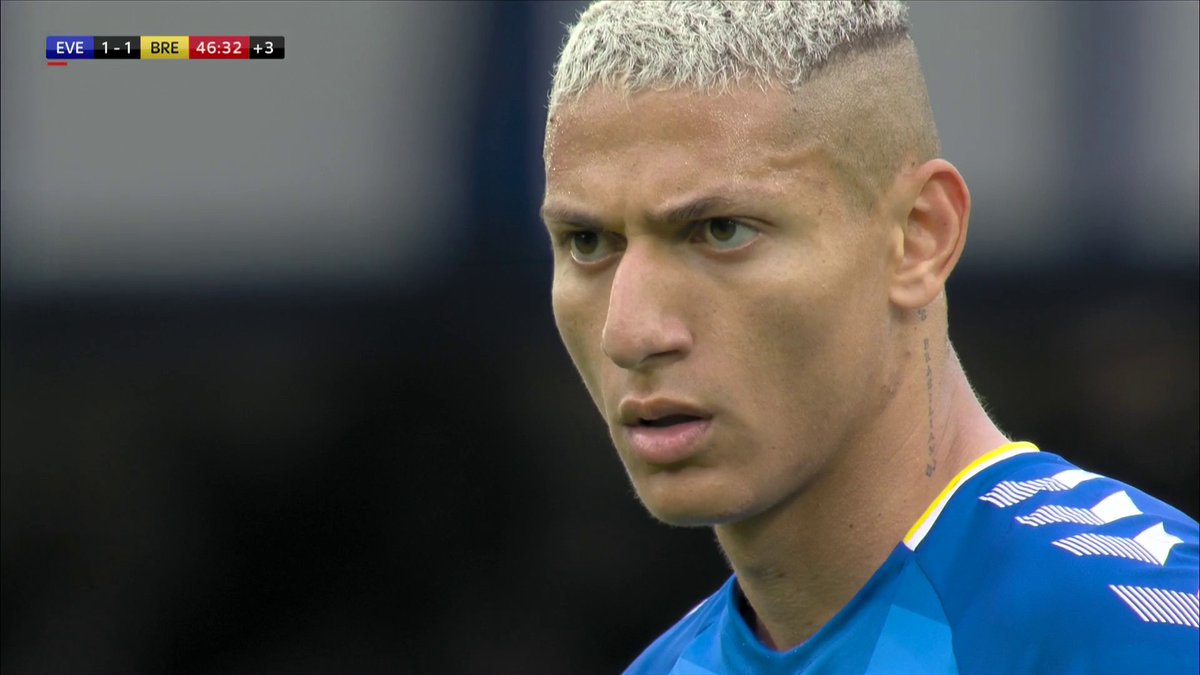 Brentford started the second half in the ascendancy, with Eriksen pulling the strings. The incredible comeback story continued with another display of astute playmaking. Brentford’s first good chance of the half came from a wide free kick, with Pickford forced into a save by a dangerous Eriksen ball.

Just like Richarlison getting his goal after being denied one, Wissa left nobody in doubt with his second vital intervention of the afternoon. A powerful header put Brentford back on level terms, and saw the atmosphere inside Goodison Park get that little bit more tense.

Brentford went ahead just moments later. Christian Norgaard was given the freedom of the city of Liverpool on the edge of the Everton box. His whipped ball found Rico Henry at the back post, who nodded home to once again swing the pendulum of this mighty game.

Abdoulaye Doucoure drew a fine near-post save from David Raya with a header, as ten-man Everton tried to will themselves to at least a point. Salomon Rondon replaced Seamus Coleman, as Lampard opted for an all-out attack in the last ten minutes. The striker appeared to misinterpret the phrase “attack” however, getting sent off just minutes after coming on for a horrendous two-footed lunge on Rico Henry. It was a fittingly baffling postscript to Everton’s collapse on the day.

Everton now have two games to rescue their record as the longest-tenured club in England’s top flight. For 118 years, the Toffees have played in the top division. Now they must hope their results against Crystal Palace and Arsenal are an improvement on Burnley or Leeds’ remaining results. Their first task is to pick themselves up from this chastening defeat.