We’ve seen refereeing howlers in the past, but in the Mali vs Tunisia group game at the African Cup of Nations, Janny Sikazwe took things to another level. With Mali leading 1-0, thanks to Ibrahima Kone’s penalty, the referee bizarrely blew for full-time on the 85th minute, to the confusion of everyone.

Tunisia’s bench quickly protested and the game was restarted, yet the drama didn’t stop there. Mali had El Bilal Toure sent off two minutes later, even though it appeared that his challenge was relatively innocuous, and even though Sikazwe was advised to look at the VAR monitor, he stuck to his original decision.

It seemed as though the referee had become flustered, and as the clock ticked to 89 mins and 49 seconds, he sparked chaos as he blew the final whistle for the second time. The Tunisian bench rushed onto the pitch to protest, but their protests were so intent that a line of security formed between the officials and the coaching staff.

This scenario is even more unexplainable as this second half featured a water break, due to the hot temperatures, a VAR checked red card and two penalties so there is no way the whistle could have been blown exactly on 90 minutes.

The players eventually made their way off the pitch but this saga was not over. Mohamed Magassouba’s, the Mali coach, had his press conference interrupted by Confederation of African Football officials and it seemed the final few minutes would be played.

His players emerged in their kits and ready to play, but Tunisia’s players did not - furious with how the match had been officiated. Fourth official Helder Martins de Carvalho, who had taken the place of Sikazwe, then blew the final whistle for the third time.

As it stands, the Mauritania vs Gambia match, scheduled to begin at 4pm was delayed by 45 minutes and is now underway, but for Tunisia, no such solution has been found. We will keep this article updated with the latest information. 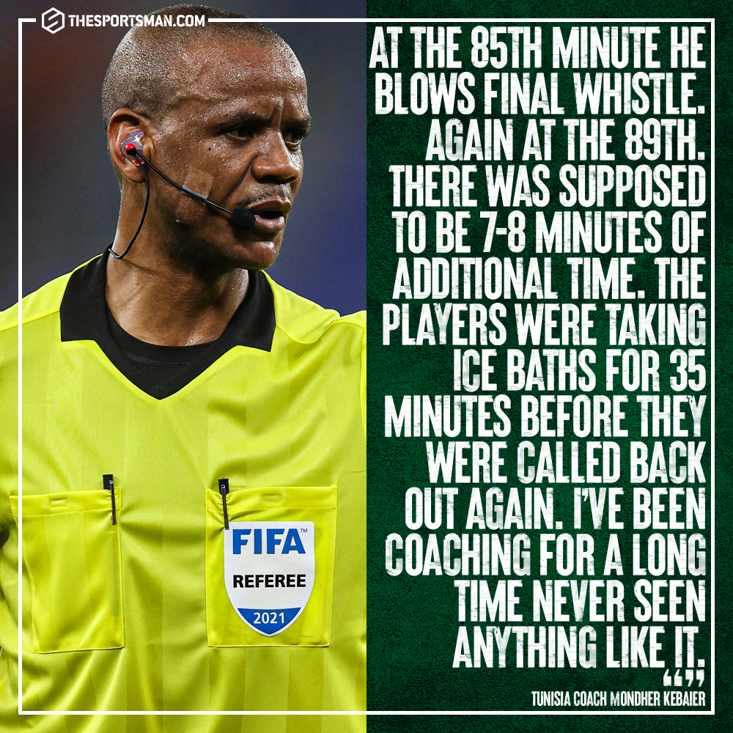